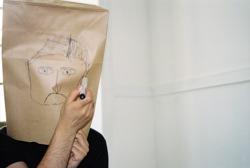 In the least successful line of Bob Dylan's otherwise devastating "Hard Rain's Gonna Fall," the narrator, while describing the hallucinatory events he'd witnessed, reports that he "met a young girl, she gave me a rainbow." Never a sentimentalist, it's hard to determine how Dylan intended this rendezvous with Roy G. Biv's altruistic, feminine purity to sound. Thirty-five years after he wrote the lyric, though, it stands out as a goofy image of flower-child dippyness.

While the sentiment of wanting to give the world a rainbow surely lies in wait, anticipating its un-ironic comeback, contemporary artists with Romantic hearts are guarded about loosing these impossibly sappy intentions. The dominant strategy these days, as best illustrated by Michael Gondry in The Science of Sleep, is to bashfully and earnestly produce a handmade, pocket-sized rainbow, thereby invoking the patina of sensitive, creative wonder while acknowledging the futility of trying to deliver anything more than a crumpled arch of colored foil. (Said gift also doubles as a nifty stand-in for the artist's radiant but scuffed heart.)

Tiago Guedes, a 30 year old Portugese artist, mines this twee-craft aesthetic in two TBA performances: Materiais Diversos (Diverse Materials) at PCPA and the smaller Um Solo (A Solo) at PNCA. In each, Guedes wordlessly tramps around the stage with unembellished industry, methodically producing his own version of pocket-sized rainbows for clearly enchanted audiences.

Materiais Diversos is the more realized performance, whose first half, most people agree, was painfully dull. (Or unbearably dull, to judge by the handful who walked out Monday night.) For half an hour, Guedes, dressed in muted khakis and a solid t-shirt, pantomimed a series of meaningless activities with the intentional pedestrian grace of an untrained dancer. The artist crossed the stage, poked his hands into the air, hopped here and there, pretended to crank something, and bustled about with a look of determined concentration. To gauge from the faces in the audience, I wasn't alone in thinking that it was probably a good thing that TBA:09 would be introducing new curatorial blood.

The second act, unsurprisingly, provided the payoff for our fidgety patience. Reenacting the same series of movements, Guedes added a battery of simple props-newspapers, masking tape, twine, etc.-so that his hand-fluttering in the first act was revealed to be make-believe knot-making; his earlier heel-toe pacing proved to be an eventual technique for adhering long strips of masking tape to papers on the floor. The audience "ahhhed" for each action they recognized from the previous half-hour, as if to sheepishly acknowledge that their grumpy, impatient sighs were both premature and presumptuous. On stage, Guedes kept busy stringing monofilament between poles, making "rainclouds" on sheets of newspaper by spritzing them with water, fanning blue tarps to simulate cresting waves, and in the crowd's favorite bit, doing an awkward backbend over a plastic river to turn himself into an arched bridge. Materiais Diversos wound down with Guedes disassembling his constructed landscape so that the stage was nearly as bare as when the he began.

Long on charm, Guedes won the crowd over with an impressive array of handmade rainbows tucked up his sleeve. The tedium of Act One was mostly forgiven, and if Materiais Diversos presented itself as a "small" performance-in conceptual ambition as much as execution-it was excused on the collective strength of all its warm, fuzzy moments. (Nobody ever said handmade rainbows don't work; it's just that they quickly become overly cute.) Unfortunately, Um Solo depleted the reservoir of goodwill that had been gathered beneath Guedes' newsprint clouds of teary precipitation.

Half the length of Materiais Diversos and similar in style, Um Solo was in the unfortunate position of coming off as a prelude to Guedes' longer, headlining performance. Much was the same: The artist mutely puttered around like a decaffeinated Chaplin with a smattering of lo-fi props (in this case, a mirror, brown grocery bags, wire, and markers), creating small revelations of delightful creativity along the way. Seated with a grocery bag on his head, he drew a face on the sack to create a whimsical mask. More masks were donned and modified: One cutout in the shape of an apple yielded an actual piece of fruit; another series of snips led to a charming paper house; yet another left the artist with a penis cutout to peer through.

The metaphor was clearly about personal and social construction-recognizing himself in the mirror, producing fruit by creating nature, wearing a fixed sexual identity, constructing notions of domesticity, ad infinitum. None of this could have mattered less. Um Solo was principally about delight, and this writer was clearly in the minority as to it's success therein. With each "ta-da" moment, the audience clasped their hands, gasped, and waited for the next surprise. It was a familiar mass reaction, but I didn't place it until halfway through the performance: Blue Man Group! The quirky use of common materials, the notion that beauty and music surround us but remain invisible because we fail to look, the conjurer's sense of anticipatory timing and voila-payoff, the industrious scampering, the minimalist costumes, the downplay of the artists' individual personae, the populist charm of the performers, and the primetime senses of humor all link Guedes and the Blue Men as kindred spirits-albeit with dramatically disparate budgets.

By the end of Um Solo, Guedes' handmade rainbows were about as welcoming as a "free hug coupon" on Valentine's Day. Jokes and magic tricks rarely move us beyond short-lived amusement because their payoff is too well defined. Once the punchline is delivered, laughter swells then dissipates, and nothing remains to chew on. Similarly, once the "alakazaam" shtick climaxes with the Jack of Spades turning up in your mom's wallet, the magic tricks' only significant moment is over. There's nothing to sink into, nothing to unveil itself, and nothing to develop a more meaningful relationship with. It's just you, a pocketful of handmade rainbows, and Portugal's most charming emo-mime.