History, Satire, and Hipster Aesthetics in Dayna Hanson's Gloria's Cause

Walking out of Dayna Hanson's Gloria's Cause last night, I had a thought that Patrick Alan Coleman vocalized before I could get a word in edge-wise. "This is one of the TBA shows that I'm going to tell friends to go see. When they ask me: 'what's good?', 'what is worth spending some cash on?' I'll point them to this." Never mind that our excitable food writer was already a few vodka-sodas into his night, or that he may be the most avid TBA supporter on staff. He is right. This is a TBA show not worth missing, and Dayna Hanson is an artist to keep your eye on.

Gloria's Cause is one part rock concert (or rock-musical depending on how you cut it), one part dance performance, one part history lesson, and at least two or three parts cutting and comedic social commentary. The performers, who all take turns playing instruments (impressively it should be noted), singing, monologuing, dancing, and story telling, take on the feat of re-imagining the beginnings of America through the lens of our very modern 2010 existence. A feat that easily could have been overdone, or even pretentious had Hanson's ensemble not been so deeply invested in the environment they were creating. Given, at times the environment was a bit over-wrought with "hipster aesthetics" (skinny jeans acting as knickerbockers, ironic t-shirts worn under 18th-century styled coats), but these, in the end, added thematically to the piece rather than disrupting it. And the highly theatrical world we're shown, full of re-interpreted historical figures, a walking/talking bald eagle, a George Washington animatronic robot, um, doing the robot, yields the result of a highly thought provoking work of art. 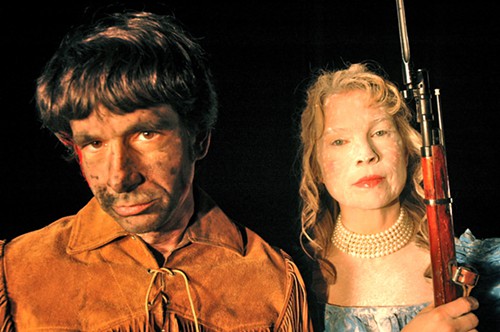 In short, Gloria's Cause is bombastic, invigorating, hilarious and mindful. At times it lacks polish (it is a work-in-progress performance),and could perhaps use some cutting down, but this shouldn't deter you from going to be what will undoubtedly be one of the festival's highlights.