It must be said that I am both very fond of Samuel Beckett, and that my previous experience seeing Conor Lovett perform has made me quite the fan Gare St. Lazare Players Ireland (GSLP). Given these things, I was still very determined last night to go to Conor Lovett's first TBA performance , First Love (based off of one of Beckett's first short stories), with an open mind and a critical eye. And I believe I succeeded, thank you very much.

The Gare St Lazare Players (you can read more about them here) are best known for taking the prose work of Samuel Beckett and translating/adapting them into theatrical performance. Not an easy feat, but one that Conor Lovett last night proved that he is a master at. Lovett's performance was, first and foremost, very funny. This is partially due to Beckett, but also very much to do with Lovett's timing. The performance itself was extremely impressive—his concentration, his ability to say th words like they were new, his determination to invite the audience into a very strange and morbid mind, all of these things made for a night of theater that was nothing short of remarkable. The show is simple. It has a minimal set, simple lights, no projections or complicated sound clips. It is just one man on a stage. And that is enough. 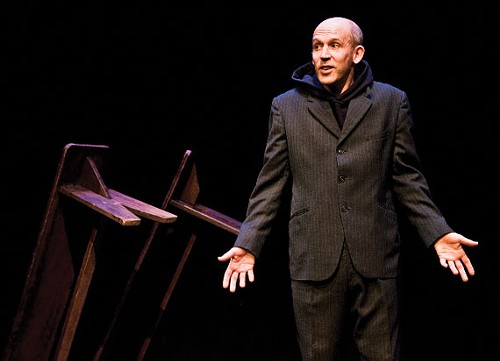 Ok ok, I know. I said I was going to try and be unbiased. I have criticisms, believe it or not, and you can read all about them after the jump...

So here are the criticisms:

1) Beckett is fucking bleak. He is morose, pessimistic, and occasionally highfalutin'. Moreover, the character that Lovett portrays is one that I'm not sure I can get behind—a vagrant misanthrope, with very few redeeming qualities.

2) The show was a little long (80 somewhat slow minutes). While very well acted, I personally began to stir and lose some interest toward the end. And I could feel the restlessness in the audience as well.

3) I'm not sure if the piece needed to be a theatrical production. While well-written and acted... This as a play? Not so convinced. I'm wondering if Conor's upcoming performance The Beckett Trilogy: Molloy, Malone Dies, and The Unnamable happening on Tuesday, 6 pm, at THE WORKS, will prove otherwise about Beckett's prose being presented as theater.

So there you have it. My praises and criticisms. Take them as you will. But if I were you, I would look more to the praises, and go see this amazing feat of theater.