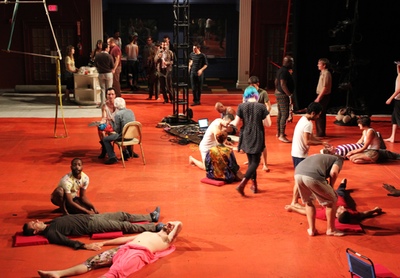 The tenth anniversary edition of the TBA festival wrapped up on Sunday. Some final thoughts:

• One show this year made my short list of all-time best TBA performances: Gob Squad's Kitchen.

• I'm having trouble thinking of a recent TBA show that's been as polarizing as Keith Hennessy's Turbulence was this year—Claude Wampler's piece in '07, maybe? I found it (unproductively) stressful and grating; others found it playful and inspiring.

• I'm ready to be done with Washington High School as TBA's HQ. The cleaned-up old high school was exciting to explore the first year; the second year, comfortably familiar; by now, I've seen one too many depressingly under-attended late-night shows in that auditorium, and those unisex bathrooms are just gross. Plus, this year the lines and security were almost comically unpleasant to deal with. Wait in line to wait in line for a show to start late? No thank you.

• It was nice to see former artistic directors Mark Russell and Cathy Edwards attending the fest—speaks well of PICA that past employees still want to hang out.

• I said it two years ago, and I'll say it again: NEEDS MORE PUBLIC ENGAGEMENT. I don't think TBA needs to make their programming more accessible—I've had this argument before—but I do think PICA needs to provide more points of entry for the general public. Remember the days of free public performances in Pioneer Courthouse Square?

• Overall, I'd say new artistic director Angela Mattox's pledge to bring in artists from underrepresented parts of the world paid off. There were some clunkers (the lineup of performance art from the Balkans was unbearable), but I'm glad I got to see Lagartijas al Sol (Mexico) and Cheltfisch (Japan), and my biggest festival regret is missing Faustin Linyekulas (Democratic Republic of the Congo).