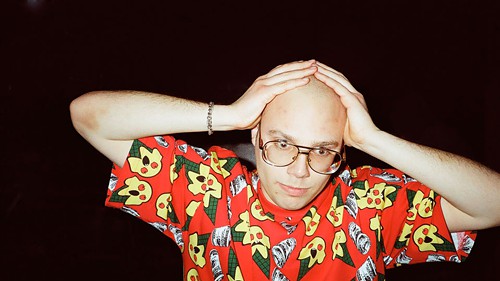 Because I'd been running headlong into TBA without watching the changing schedule, I was under the impression I'd be seeing Janka Nabay and the Bubu Gang last night at closeout party at The Works. I realized slowly, after my second (or third or whatever) Natasha Kmeto/Rap School punch that I was probably going to see Natasha Kmeto and Rap Class instead.

And it was true! The night was taken over by the Dropping Gems crew. It just goes to show you, you can never trust your little TBA book or your calendar in your phone as much as you can trust a cocktail. Cocktails don't lie.

First there was short set by Rap Class, who seemed to be dressed farm too warmly. (Luckily, when he came back out for his proper set after Kmeto, he had shed his baggy sweatshirt.) Rap Class is all smiles, seriously. This is a guy who looks happier making music than anybody. And he should be, because The Works was finally living up to its party potential, due to Rap Class and Natasha Kmeto. 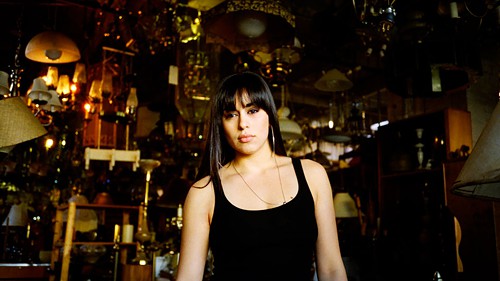 Kmeto, too, was pretty obviously pumped to be on stage. "It's Saturday night," she laughed, "what can I do but sing some sexy music for you?" She delivered on that promise. She builds loops of her voice over the electronics she's manipulating, and every sound from her mouth is sex: "Who will be the one to go home with you tonight? Can I be the one?"

All week at Works events I had been thinking, I can't wait till this place is just full of sweaty, sexy-dancing art people. TBA brings an eclectic crowd out to the Con-Way warehouse: young Portlanders looking for a good time, imported artists of every stripe, older art heads from the city and suburbs, and tired volunteers ready to shake off the week and dance.

Before I got drunk enough to hit the floor myself, I was enjoying watching this insoluble mix of people dance. There were a few older couples slow dancing to Kmeto's doing-it jams, and I don't know if they were a little buzzed or just awesome, but one of these couples got REALLY dirty, but in a classy, well-dressed way that totally shamed me off the dance floor.

That mixed with the usual crowd of Portlanders not-quite-dancing, the handful of really amazing let-it-all go types, and the impressive number of what had to be professionals—this is TBA, after all, and the crowd presumably contained performance artists and dancers from all over the world—made it a dance party that lived up to the venue and everything it contained this past week.

As sweaty and loud and sexy as it was, it was impossible not to remember that this dance music occupied the same physical space that a week of various performance art had occupied. And of course, through the warehouse walls, one could find galleries filled with art, or the Room Tone performance happening just before the Dropping Gems show. Kmeto and Rap Class brought the blend of accessibility and creativity that TBA, and The Works in particular, require.

I would not complain if Dropping Gems became the official dance party curators for TBA every year. At least I could watch those old folks show me up on the dance floor every year.

The Mercury Cocktail Awards (AKA the Cockys)

Sweater Weather in a Glass: Fall Cocktails at New and Old Favorite Bars