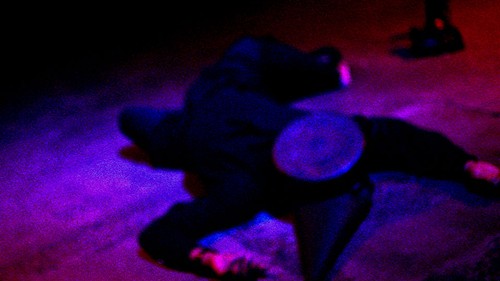 Keyon Gaskin’s long-running piece, It's Not a Thing, appearing as part of TBA Friday and Saturday at BodyVox, began subverting performance tropes as soon as it started. After the crowd took seats in BodyVox’s studio, Gaskin shut off the lights and began setting up, stepping and breathing heavily, absent-mindedly introducing the work by undercutting it entirely with a list of reasons he didn’t want to do it. “I have some problems with performance,” he said. There were things he didn’t like, “or that I have contention with” about contemporary performance art, including: drag, race as performance, performing to music, curtain speeches, and performing for mostly white audiences.

I probably don’t have to tell you that we were a mostly white audience. It might not be what Gaskin wanted, or what he purported to want, but ultimately the audience is what It’s Not a Thing is about. When the lights come up, they come up as one bright spotlight on the audience. It’s uncomfortably bright, but that’s okay, because Gaskin’s next act is to move the audience to the floor.

There, scattered across the floor, the audience is asked to rub their hands together. It makes a sound, you already know it makes a sound, but it’s just a warmup. Next he has the audience wring their hands and wrists. It’s surprising how quickly that action began to seem obsessive and violent—evoking the salivating expectation before a fresh kill and the rubbed-raw feeling of handcuffed wrists. Meanwhile, Gaskin roamed the room, weaving between people, his breath shortening, a panic growing, until he was choking out near-sobs, and he ran. When he returned, he asked for help. He really seemed to need it.

From a short number sung in drag to a long, aggressive bout of twerking to Lil Wayne’s “She Will,” to a bottomless tap number, no matter what aspect of contemporary performance art Gaskin takes aim at, the real subject is the relationship with the audience. It’s not audience participation, it’s a ramped-up feeling of spectatorship. An artist among an audience is necessarily a lone other in a mostly homogenous crowd, but here the artist also presents as young, queer (or at least in drag), and black, while the crowd is a mostly white bunch of ravenous spectators.

Gaskin holds together a deliriously bizarre persona, swinging wildly from demanding action on the part of the audience to desperately pleading for it, from posturing bravado to shaking vulnerability, and from slapstick to self-harm. The overwhelming feeling is that the artist feels, at best, disinterest for the audience—we don’t matter, and frankly he’d rather we weren’t an audience at all—and at worst, disdain. But really what’s under all that is fear, and Gaskin excels at both embodying that fear and revealing it in the audience. Once, when an audience member stubbornly refused to leave the seating, Gaskin said, “I need you to move. I’m not doing this for me. I’m doing it for you. I’m not asking you, you are.” And as we nervously, hungrily, lustily, obsessively wring our hands, the fear Gaskin makes us feel has little to do with what he’s going to do to us. We’re afraid of what we’re doing to him.