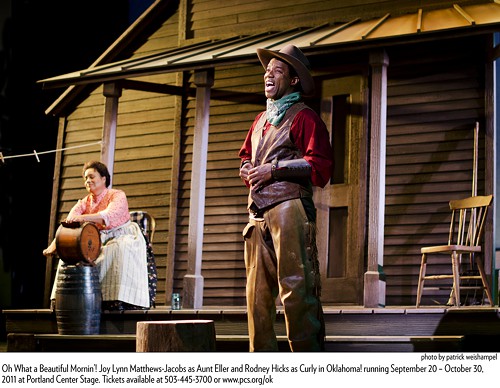 Every year, Portland Center Stage opens their season with a musical. This year, it's Oklahoma—and PCS Artistic Director Chris Coleman's decision to cast the show with all black actors is getting folks all sorts of riled up.

Over at the Oregonian, Marty Hughley's preview piece on the show drew a predictably ugly response from OregonLive commenters. Presumably because he can't stand to see a troll go hungry, Hughley then invited Coleman to explain his casting decision. Abridged version: There were all-black cowboy towns, so why shouldn't Oklahoma be set in one of them? (And seriously: Don't feed the fucking trolls, OregonLive. The internet would be a better place if we could all just pretend your commenters didn't exist.)

In reviewing the show for the Mercury, though, Noah Dunham finds Coleman's casting decision troubling:

Where Coleman's choice becomes problematic, however, is in the story that isn't being told with the production. Race simply isn't a topic found in the original book that Hammerstein wrote for a 1940s Broadway audience, and Coleman hasn't found a way to tackle this topic in the current production. One has to imagine that discrimination was something very much on the mind of African Americans at the turn of the 20th century. Jim Crow laws were being upheld by the Supreme Court, and the Civil Rights Act of 1964 was still decades away. The fact that this doesn't even come across as an undertone in PCS's production makes the credibility of Coleman's choice questionable.

A few days ago, the actor who played Curly weighed in on Noah's review, arguing that not only is the casting historically accurate, but that it's actually a radical act to let a show featuring black actors be about something other than race:

The choice to keep the script intact and not put an agenda or statement of “race” on it, to me, seems like the harder and less obvious choice and ultimately logical and accurate for the time and place in which the piece takes place. It gives people a chance to see a story on stage that rarely gets told in theater: an African-American story about hope and love without the backdrop of racism or a political agenda as its antagonist.

Without having seen the show, I have just two comments:

(1): Usually there is nothing more to say about PCS' season openers than "the sets were great." I'm not prepared to argue that something is successful simply because it sparks discussion, but it's certainly one measure of engagement. And I'm finding this particular conversation pretty interesting.

(2): There were only two local actors in this production, so let's go ahead and put to rest the argument that this production puts "more [African American actors] to work than perhaps often get to in our very white city," as one PCS commenter wrote. If that's your concern, allow me to direct you toward Portland Playhouse's upcoming Gem of the Ocean—a play that is explicitly about race, and that probably won't generate as much conversation as Oklahoma has.

Comments 17
Tags: Theater & Performance Blogs
If you enjoy articles like this, please help the Mercury continue our mission of providing up-to-the-minute information, progressive journalism, and fun things to do in Portland by making a small recurring monthly contribution. Never forget: Your help is essential and very much appreciated!
CONTRIBUTE NOW