Matt Beard, courtesy of Cirque du Soleil
The lingering feeling that, in early 2020, you did or said something that jinxed all of us and caused the pandemic is pretty universal. For my family, it was our decision that my kid was old enough to take to cool places which led to the subsequent purchase of tickets for every cool thing scheduled to come to Portland that year. We scoffed at refundable tickets or insurance! Nothing could stop us from enjoying things! We were gonna do it all!

Except, well. You know. We didn't.

When I saw that Cirque du Soleil was setting up their tent at the Portland Expo Center this summer, I freaked out. I wanted to go. I’ve seen a couple Cirque productions before, and they’re fun. But buying tickets brought back some bad feelings. Would my scheduling hubris bring another strain of COVID? Tickets to this show are expensive—we're talking $40-$200 range! Did I want to roll the dice on a several-hundred-dollar family event during a time when stuff was still getting canceled left and right?

I hemmed and hawed. And I decided against going. But then I was asked to review the show for the Mercury, and offer insight into the exact issue at hand: Is Cirque du Soleil Alegría worth the $100-ish per seat price, and is it in the age-appropriate ballpark sweet-spot for a five-year-old?

Now, here I am, shouting from the rooftops of the internet: Go to this show! It’s wonderful!

The particular strain of the expansive Cirque universe, currently visiting Portland for a month, is called Alegría, meaning "joy" in Spanish. A remount of a popular 1994 version, Alegría weaves a story of a kingdom that has lost its king, and according to the description: "the power struggle at play between the old order and a new movement yearning for hope and renewal.” Okay! It could also be described as: beautiful people in sparkly clothes flying all over the dang place. 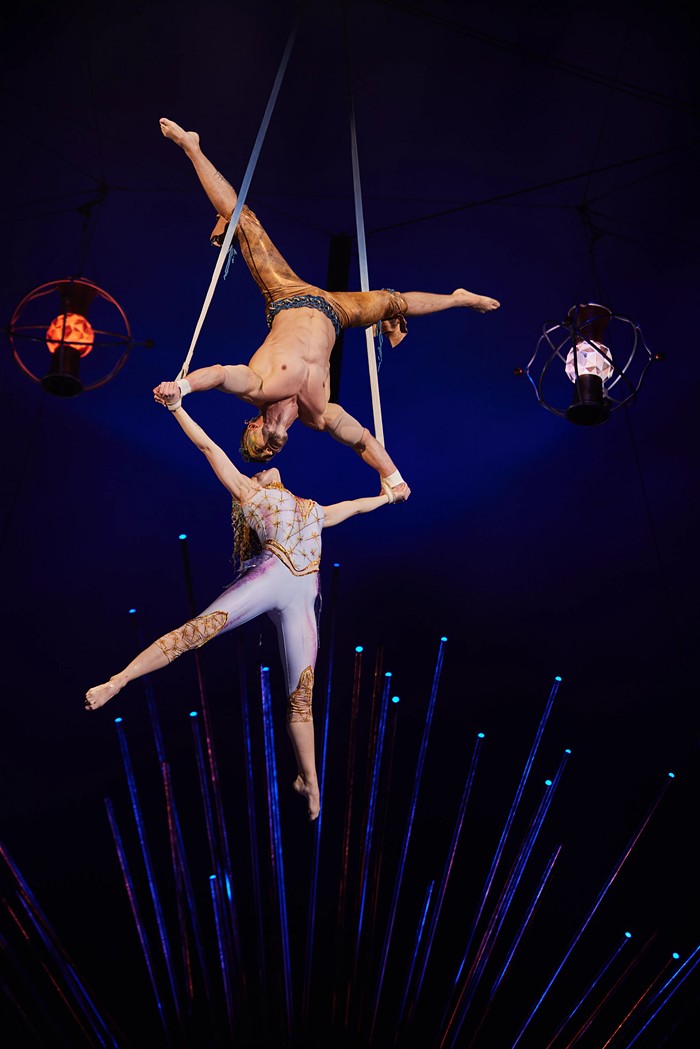 Pictured: beautiful people in sparkly clothes flying all over the dang place. Matt Beard, courtesy of Cirque du Soleil
I loved—in very particular order—the fire juggler, the hula hoop gal, the gays in the snowstorm, and the shirtless wheel-y man. But the clowns and other jesters that served as coolers in between big athletic acts were equally engaging. My kid watched French-Canadian clowns in elaborate wigs do pratfalls as eagerly as I watched shirtless men flip off each other's shoulders.

As we were seated in the second row—which would normally have set us back $199 a seat (though there are price breaks for child tickets, thank the lords of Alegría), we felt heat from the flames of the fire jugglers. We were blasted with confetti. We worried the acrobats were going to fall onto our faces. It was exciting! But it also had some drawbacks: We had to crane our necks all the way for some of the highest aerial stunts. And the fire stuff was a little bit scary for my kid that close. (Pro-tip: This is a situation where it’s acceptable to lie to a child. I told her the fire was fake, and she bought it.) 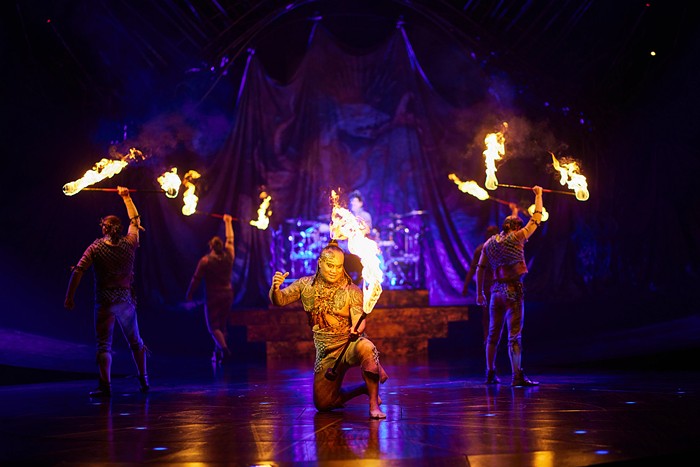 In the words of '90s R&B singer Vee Sales: Step back, you're dancing kinda close. Matt Beard, courtesy of Cirque du Soleil
This production absolutely ruled. I loved it, my child loved it, and I'm planning to buy tickets to go again—partly because it was so cool, and partly because we went to an 8 pm show that was straight-up too long for a 5-year-old. Though there were actual men juggling actual fire about four feet from our faces, when a kid is tired, they’re tired. So we missed the last 30 minutes of the show.

Next time we’ll do one of the matinee showings, which are plentiful on the weekends. There's also a Cirque Week promotion running through Jun 26, where ticket-buyers can find seats as inexpensive as $39—although they're already pretty slim and in the far back.

That said, while the circus tent seems gigantic from the outside, it’s pretty intimate once you get in there—I don’t think there is a bad seat in the house.

Part of me worries that giving this glowing review and encouraging you all to buy tickets to Alegría will curse the show and trigger a fresh wave of COVID. But superstition neither causes nor prevents new strains. All my plans point to going back "under the big top," and I know Cirque du Soleil: Alegría is more than dazzling enough to keep my mind occupied.