The provocative theater company pulls from Robert Frank's black-and-white photographs to prod at the tumultuous history of American social relations. 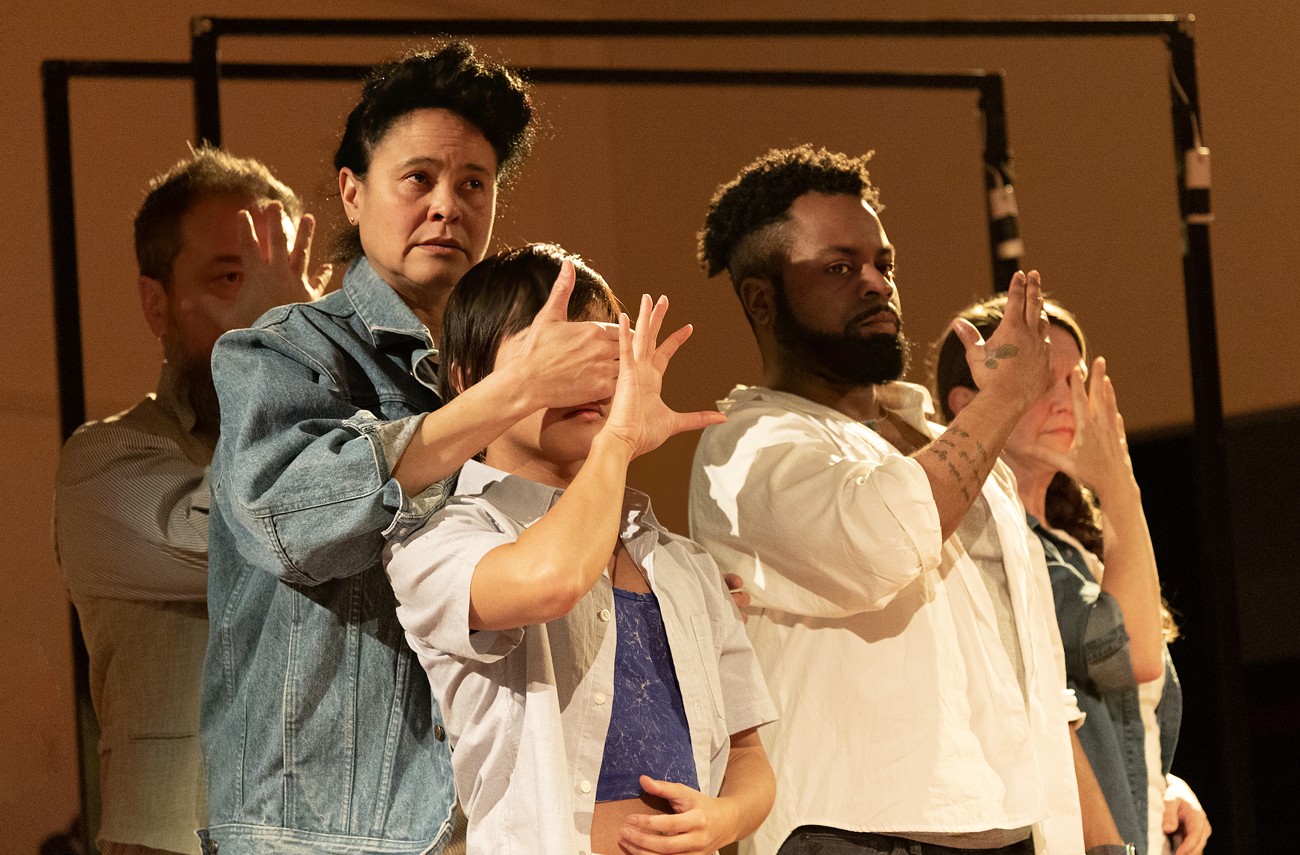 “You motherfucker.” The two words, scribbled in a notebook, convinced Cristi Miles her vision was working.

Since 2020, Miles—co-artistic director of Portland Experimental Theatre Ensemble (PETE)—had been dreaming up a theatrical presentation that would capture the way she felt when she first encountered Swiss photographer Robert Frank’s 1959 series The Americans, via an episode of The Daily, which noted their thematic overlap with that year's unstable summer.

The high-contrast black-and-white images, taken by Frank in an attempt to untangle the “real” America from its manicured image, inspired her to draw a link between the respective powers of photography and the body as instruments of social critique. In her own words, she “started to see dance.”

“I talk about race all the time, right? I’m a Latina in Portland, Oregon,” Miles said, explaining the piece’s origins. “And I feel like I talk myself into circles. I’m sure it’s a spiral, and I’m moving forward slowly, but sometimes it just feels like I’m a hamster on a wheel running in place, having the same conversations.” However, something Miles and her cohorts at PETE teach their students is that “the body knows first.” That is: Sometimes the greatest wisdom has nothing to do with stringing together sentences.

Her fellow artists at PETE were supportive of the idea, but urged her to bring a writer onboard, so she gingerly tapped journalist and playwright Chris Gonzalez to sit in on an early workshop and write to the physical improvisation he observed. “You motherfucker” was the first line he jotted down.

“I was like, ‘Oh shit! Oh shit! Here we go! This is gonna work,’” Miles recalled. “The text Chris wrote is so open and so direct. And it implicates ourselves and each other and really looks at who we are as participants in American culture.”

For a company whose work is unfailingly unorthodox (past productions have transported Chekhov to the Arctic, set Beckett in a proverbial Eden, and folded elements from Pussy Riot to Donald Rumsfeld into a fractured spy comedy), The Americans still treads new territory for PETE. It’s the group’s first site-specific piece, created with and for the Alberta House. Plus, the ensemble comprises a rare 50/50 split of company members and guest artists—most of whom, including Miles’s co-director Olivia Mathews, are BIPOC, per Miles’s own mandate.

Gonzalez described the process of devising The Americans as, “super meta.” In participating, he came to better understand the task before America’s founding fathers. “We’re in this room making something up, and we’re having to agree upon terms and rules. It’s supposed to be a container, and it’s supposed to have a certain degree of freedom to it,” he mused. “It felt like we were, in a weird way, doing the experiment of America.”

He also learned to regard the past with a critical eye: a major theme of the finished piece. “There’s a trick that photography can play on you—you look at a picture of you and your ex, and you’re like, ‘Oh my god, it was amazing!’ It can capture the dream of something, instead of the reality,” he said. “So there’s this constant dialectic between this movement, these photos, and the nostalgia that we’re tempted to indulge in versus the actual real shit that’s surrounding us.”

That “real shit” is made explicit in a series of paintings by Portland artist Henk Pander that depict the 2020 protests, which will be in full view during the performance.

To articulate the ultimate goal of The Americans, Miles turned to a quote from Haitian filmmaker Raoul Peck. “I think any solution will first have to start with the real story. We need to sit down around the same table and agree on the diagnostic,” Peck said. “It’s not about showing how culprit you are or not. It’s about acknowledging the past and present, because they are strongly connected.”

The idea, then, is to present an audience with weight so they might, down the road, learn to move through the world more lightly. If the show started to coalesce around a confrontational “you motherfucker,” Miles hopes The Americans leaves viewers feeling as unburdened as the subject of her favorite Frank photograph: a woman lounging in a wicker chair in the middle of a grassy field, skirt flowing, her face to the wind.

Tags: Theater & Performance Culture
If you enjoy articles like this, please help the Mercury continue our mission of providing up-to-the-minute information, progressive journalism, and fun things to do in Portland by making a small recurring monthly contribution. Never forget: Your help is essential and very much appreciated!
CONTRIBUTE NOW