1
It's good to know our representatives want bikes and cars to be treated equally, with no special treatment for one over the other.

BTA presented this bill without explaining WHY we need it-- so it instantly got beat down as "special treatment" and such for bikes.

The way I see it, the bill would have protected bicyclists from being targeted by police when riding in a manner that, while currently illegal, is perfectly safe and reasonable. I'm not talking about "blowing through stop signs" but slowing, making sure there's no oncoming traffic of any type, and then proceeding. It's how most bicyclists already ride when at small intersections. And it's similar to how many drivers drive.

But what's the problem? Cops taking enforcement to an extreme. You see this when they set up "stings" in Portland (or target downtown bike messengers). You see this in small rural communities where the police will camp out at a deserted intersection on a sunny day and fill their coffers when roadies come through.

These practices generate a lot of ill will between cops and cyclists yet rarely, if ever, promote public safety. At times it's essentially police harassment-- a technicality enforced only when the authorities feel like it.

This bill would have clearly defined when cops can ticket bikes-- while promoting safe behavior. But the BTA did a shitty job of explaining it, and all the old grumpus voices in the mainstream media wrung as much sensationalistic crap out of it as you'd expect.

So whatever, BTA. I say Portland cyclists should focus their efforts on getting the PPB to commit to a standard of enforcement. Forget the rest of the state for now-- let's clamp down on unfair enforcement practices in our community and work from there.
Chunty McHutchence on April 21, 2009 at 12:22 PM · Report this

5
I do hope those who are opposed to "special rights", for the sake of consistency, will now lobby to repeal those pesky "special rights" laws which ban nonmotorized vehicles from most urban freeways, as well as removing any barriers to pedestrians from crossing an intersection which cars may cross but pedestrians currently may not.
Bob R. on April 21, 2009 at 12:25 PM · Report this
6
Why would cops bother with harassing bikers when they can harass pedestrians in perpetuity for jaywalking.

The reason cops are putting stings on bikers are because there have been accidents, and public pressure to do so.

If you've ever waited for buses on the mall on 3rd and 4th, you have seen bikers [messengers] swerve in and out of traffic all the time, and scream that an SUV or bus have cut them off. Look, I'm a biker, but those guys are fucking assholes, and put *my* life at potential risk because of their shitty biking and some car is going to take it out on me one day.

Also, I'd happily pay a registration fee/tax, if it meant that the bike lanes are repainted yearly and we get more projects devoted to us as a result. I will absolutely put my money where my mouth is.
on April 21, 2009 at 12:32 PM · Report this
7
Bricker is a prime example of how the BTA is a joke. I mean, really, he's blaming blog comments for his poorly-handled (and, to be honest-- pretty unlikely anyway) bill failing? Hilarious.

Wayne Kreiger's bill is even more knee-slappingly amusing. And it generated exactly the response it deserves-- old politician from a conservative district fails to undstand anything outside of his myopic little world and proposes a bunch of laughable stuff that only appeals to curmodgeons as ignorant as himself?

Plus, everybody knows in Portland that when a car reaches a curb it is supposed to sit there as long as possible until all movement in any direction has ceased and the driver has reached a state of Zen Oneness.
seanpdx on April 21, 2009 at 3:38 PM · Report this
10
Wait, does this mean bike legislation is the first and only time these politicians had mean things said to them? Because you get the sense it's a new experience for them.

I have to imagine that beer tax law garnered them a few surly drunk-dials. Or maybe beer really does make you a jolly good fellow.
Inductee on April 21, 2009 at 5:18 PM · Report this
11
Like most cyclists, I tend to avoid arterial streets and ride parallel streets which happen to have a lot of stop signs. I am strongly motivated to do this because of the dangerous driving and pollution exhibited by motorists, otherwise I would take the shortest and fastest route. The "stop as yields" effort is basically a response to this, so that cyclists can make their way faster and with less effort when it doesn't create more danger. In the end, it is careless driving and the unpleasantness of auto exhaust that created this need.
organic.brian on April 21, 2009 at 6:25 PM · Report this 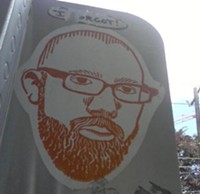 12
"So when are they going to start repealing all of those damn special rights that the pedestrians get?" --tk

Oh, you mean like the "right" to continually dodge cars, buses, and *bicyclists* who pay us no mind and continually run through stop signs and crosswalks?
If trying not to get smeared across the grill of an automobile is a "special right," it's one I'll gladly give up any day.

blownspeakers on April 21, 2009 at 8:47 PM · Report this
13
Most cars don't come to a complete stop at stop signs and I doubt most cyclists will either (probably not me). When will cops be forced to stop "legally" running through stop signs every time they flash their lights for two seconds? I've seen it many times, at red lights, too. They're not usually going anywhere.
booboo on April 21, 2009 at 11:07 PM · Report this
14
I recently thought of another argument FOR the Idaho stop law:
Allowing a cyclist the right of way at a stop sign reduces traffic congestion. How can that make sense? It is my experience that drivers most often give the right of way to cyclists anyway. But when I refuse the right of way, everyone in the intersection just sits there staring at each other. And them I motion the usual signals "Come on!... What are you doing?...Go already..." And then they usually still don't budge so I just go. Its almost as if the divers already expect for the cyclist to keep rolling. (If I had the book in front of me, I'd site the excerpt from The Immortal Class by Travis Hugh Culley where he messes up his ankle because a driver didn't take his/her right of way.

And as far as the "special rights" goes, thats BS. Call them "different laws". Traffic laws aren't written with cyclists in mind. Traffic laws are written for automobiles and then cyclists just have to abide regardless of how safe or unsafe they are for cyclists. There are a few "exceptions" to vehicular law which could also be deemed "special rights" but in reality are just different laws due to the fact that a bicycle is a VERY different type of machine than an automobile. (Like riding on sidewalks outside of business districts).
mbegin on April 22, 2009 at 3:04 PM · Report this
15
mbegin, An erroneous report by KATU and KVAL caused a lot of confusion about the Idaho Style stops and the right of way. The bill would not have changed the right of way rules at all. If another vehicle has the right of way the cyclist would still be required to stop.
econoline on April 22, 2009 at 4:06 PM · Report this