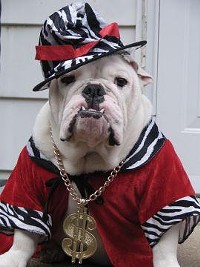 1
In a related note: fuck you, Washington County. %49.51 for Kitz, vs. 48.45% for Dudley?* I know you're a bunch of Tea Party Security Moms, but still--that's a close freaking call for one of the most populous (and--compared with the rest of Oregon--progressive) counties in the state!

(*as of 8:28pm)
Ansel on November 2, 2010 at 8:30 PM · Report this
2
Spoken like a true, angry, sore loser lib - complete w/profanity! You should be very proud, no matter who comes out on top (of course, if it's Dudley, you guys will demand a "recount" [read: fixed, fraudulent returns] until your candidate "wins".) BTW, are you serious? Most of Oregon is non-"progressive"?!? PUH-LEEEZ!! If, in fact, Dudley prevails even once the votes from liberal Multnomah County are tallied, it will be further proof that the big-spending, big-government ways of Obama and the Dems are being rejected nationwide. YESSSSS!!!!
jmac72 on November 3, 2010 at 7:52 AM · Report this
3
let's grow up everyone. Enjoy the sun today & who really cares about government. They're puppets of the rich and special interest groups. No matter who sits in the chair in Wash DC, they answer to big money.
disgusted-as-usual on November 3, 2010 at 7:58 AM · Report this
4
If Katslober wins because of multliberal county,THEY can pay his F$^%NG SALES tax and watch all the people that come here to shop from Washington and Canada stay home with their money.
demsuck on November 3, 2010 at 8:39 AM · Report this
5
Idiots elect basket ball players to political positions just as they do for B cowboy flicks and stupid action flicks.... BIG BUSINESS buys the vote of the ignorant masses who can only take in sound bites and tv commercials.... Unfortunately we all must live in the ruins of their ignorance, and laziness.....
lisanagain on November 3, 2010 at 9:06 AM · Report this
6
imac72 is completely ignorant of the fact that Bush (Republican) created a government bigger than any ever before, and a deficit to match. Obama (Democrat) has cut that deficit (a little, but it's still been reduced). The last president to eliminate the deficit was Clinton (Democrat).

Congrats, imac, you just voted for the party of big government and big spending.

You probably also don't know that 40% of the stimulus bill was tax cuts, and that the bank bailout was Bush's policy, not Obama's.

Clearly this country needs more readers and less Republicans.
on November 3, 2010 at 9:41 AM · Report this
7
So because someone was an athlete at one time, that's all they are capable of? How stupid. Prior experience in government does not make someone a more fit candidate any more than lack of experience makes them unfit. Dedication, vision, and for goodness sakes, a little bit of common sense! makes a good candidate. People are sick of the same old thing. Sick of having too much money fly out the window with nothing to show for it; sick of trusting government and having it come back to bite them. Maybe the "ignorant masses" aren't ignorant, just fed up with a stagnant status quo.
Our current president was elected on charisma, eloquence, and a good tagline. Any basketball player can pull that off.
kma on November 3, 2010 at 9:46 AM · Report this
8
Reader- Just curious, where are you getting your information? I have not read (yes, I am a Republican who also reads!) anything suggesting that Obama has cut the deficit in any measure. Would be interested in your sources. Thanks.
kma on November 3, 2010 at 9:52 AM · Report this
9
kma, here you go. Two recent articles from respected news organizations, Agence France Presse and Reuters.