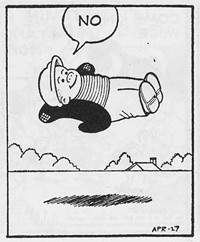 5
"Casts a terrible shadow" is fear-mongering Danielle Steele prose without more information about the situation. However the protesters should certainly remember your male daycare worker's adage: "I cared so much about preventing anything terrible from happening that I made sure nothing terrible could happen." Just like the Christian church, noble intentions do nothing to change how some people suck.

People all over were talking last night about the need to hold everyone to a higher standard of behavior, lest the protests become proof of the smallness of the protestors. You should look for those folk Sarah, they give a nice illustration of the protest's sensibilities.
sexmachinealpha on October 9, 2011 at 3:49 PM · Report this
6
If it bleeds, it leads.
frankieb on October 9, 2011 at 4:26 PM · Report this
7
Except for #5, all of you commenting here are fucking idiots. The OCCUPY organizers booted the asshole as soon as they got word and flagged down police immediately (chasing down suspected rapists is one of the few things cops can do to make themselves useful - even i'll adimt)! PLUS there are activists on hand at camp to hanle sexual assault issues. Thank you soo much for pointing that out, Sarah!!!

I wonder how many sexual assaults and near-rapes occur at RoseFest every year. Nobody has shit to say on that, huh?
DamosA on October 9, 2011 at 8:42 PM · Report this

8
@DamosA - Wouldn't it have been better to detain a sexual assault suspect rather than letting him go?!
tcraighenry on October 10, 2011 at 8:57 AM · Report this
9
And might you please explain how it is that OCCUPY activists suddenly have authority/law-enforcement powers to PHYSICALLY DETAIN suspects??? Should they have rigged up an ad-hoc kangaroo court as well?

They did EXACTLY what they were suppose to have done - from a legal, practical, and common sense standpoint.

Definition of Probable Cause: "A knowledge of facts that would indicate to a reasonable third party that a crime has been committed, and the person detained has committed that crime."

Clearly, the organizers of Occupy Portland had probable cause to believe that a sexual assault had been committed in their presence. (All you need is a victim indicated she was assaulted, and to identify the suspect as the individual responsible.)They would have been legally justified in using any/all force necessary to detain the suspect, and hand him over to the (numerous) police officers in the area. Given the numbers of people present, it would have represented no danger to those making a citizen's arrest.

But the organizer's didn't want to ride the political heat for a sexual assault committed in their midst, so, not only did they allow the puke to leave - They encouraged it. And now, a rapist is loose in the city to offend again, and destroy another woman's life.

Whatever moral authority Occupy Portland claimed to have is now lost. If the victim were a member of my family I would encourage her to find the best personal injury attorney in the state and sue the shit out of every motherfucker involved in this travesty, and every person involved in organizing this event.

Occupy Portland, fuck you very, very much.
on October 11, 2011 at 10:36 PM · Report this
11
I didn't have time to read this long-winded diatribe of yours, since i'm NOT a fucking bigoted obsessive nerd. I still stand by what i originally said, which is correct, mind you.

DamosA on October 12, 2011 at 12:16 AM · Report this
12
Hey idiot - you asked what authority they had; I showed you what the law says in the state of Oregon. You have the time, as much as you are on here shooting your mouth off.

Or is that your reading and comprehension skills are on level as your spelling ability?
on October 12, 2011 at 9:38 AM · Report this
13
And again with the ad-hominiem attacks. Man, how desperate and rage-filled do you have to be to unearth some obscure legal statute that almost NOONE except for legal scholars and bitter obsessive nerds (and i doubt you're the latter) would know about - JUST to try and win and arguement where there was no arguement to begin with!?

OCCUPY activists got rid of the guy immediately! They called the cops, damn! Have YOU ever conducted a 'citizens' arrest? I bet you haven't no. So why don't you shut the fuck up then?
DamosA on October 12, 2011 at 2:08 PM · Report this
14
I'm not a "legal scholar"; I just Googled "Oregon Statute for Citizen's Arrest." It took all of 25 seconds. Given the number of laptops, and people at Occupy Portland claiming to have college degrees, one would think someone could have figured it out... No wonder they can't seem to find gainful employment.

And yes, I have made a citizen's arrest. Three years ago a couple of friends and I were taking a walk when we happened on a guy beating a woman. We separated them, called 911, and detained him until the police arrived. It's called "civic duty"...

You are such a hypocrite. You constantly caterwaul, gnash your teeth, and beat your breast about police violence - yet maintain a homepage that shows a prostrate police officer, bleeding from a headwound. That person shown in your website is a *human fucking being.* You deny him the humanity that you demand for youself...

That's what made it so easy for the German Government to convince the soldiers advancing into Russia to murder *50 Million* people; they convinced them that the people they encountered weren't human. You are a fascist; the only thing separating you from the mobs committing genocide in Egypt, Uganda, and Rwanda is that you do not have a weapon, and a mob to egg you on.

In my younger days, I actively fought such inane stupidy. To paraphase LtCol. Frank Slade ("Scent of a Woman") - If I were half the man I was 5 years ago, I would be more than happy to meet you at the Elk Statue on Main, say at about 3:00 am, and settle some shit.

But, "I'm too fucking old, too fucking tired, and too fucking blind" to do much anything, anymore. But, I can still see well enough to know that you are full of shit.

And, by the way cumbubble, it's spelled "ad hominem." Learn the fuck to spell, use a dictionary, or spellcheck...
on October 13, 2011 at 10:11 PM · Report this
15
While a citizen's arrest may have been the best course of action in this case, not everyone knows about it. The people involved got the assailant away from the victim, and informed law enforcement. They most likely were doing what they thought was best in a bad situation
on November 1, 2011 at 7:52 PM · Report this