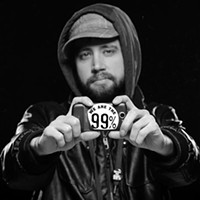 "The fact that hundreds of millions of dollars in corporate spending can happen without a fingerprint... I don't think our forefathers and foremothers ever intended that."
It is appalling how corporations like SEIU, AFL-CIO, OEA, AFT and other our buying our politicians. I sure hope you haven't taken any money from them.

4
HEY ANDY, YOU REALIZE THE U.S. VIRGIN ISLANDS HAVE AS MUCH REPRESENTATION IN CONGRESS AS WASHINGTON, DC, RIGHT?

OF COURSE YOU DON'T. THAT WOULD REQUIRE FACTUAL KNOWLEDGE.
($8239f8h248cerfehjf23@&*@ebdjhb23f237OCDBO#BD*(# on December 15, 2011 at 4:13 PM · Report this
5
FYI Occupy PDX passed the following October 22nd
"We, Occupy Portland do not see corporations as people so we seek to end Corporate Personhood."
http://www.nedroj.com/ocowiki/index.php?title=Corp_Personhood_Workgroup