2
I'm going to call your shit on this review Joe. For the first time Nick's girlfriend is thrown into a situation where he might have to reveal what is really going on in his life. Any mythological creature introduced into downtown Portland, (BTW Schoolhouse Supply is on the Eastside) and featured at Dante's is actually pretty cool. Why wouldn't a chick be a dragon. I'm pretty sure she travels to Burning Man and sets off their effigy each year. Compared to some of the other lame offerings right now, Supernatural, The Vampire Diaries, all the other lame shit, this show actually has some content, and some strong characters. 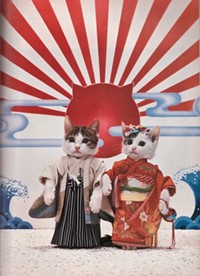 If you've ever seen the excellent Italian detective series "Montalbano," set in Sicily, you know that Salvo's girlfriend lives far away in Milan, just visiting occasionally; in some episodes she doesn't appear at all. (There's an idea, have Juliette move to L.A.!) Salvo has a Slavic female friend who helps him occasionally with an investigation and, yes, they flirt, but keep things platonic, somehow.

7
I seriously wish this show was better, I really really want to like it. They need to work more on the story arc, this "Monster Du Jour" format is getting played out.
disastronaut on March 11, 2012 at 3:00 PM · Report this