No longer standing at SE 15th and Umatilla.
As expected, the Portland City Council voted last week to kickstart a set of rules aimed, partly, at slowing Portland home demolitions. The plan: Require developers to dismantle old and historic homes piece by piece, rather than reducing them to splinters with a wrecking ball.

That dismantlement—knows as deconstruction—is a longer, more expensive process than run-of-the-mill demolition.

"The market has created financial incentives for demolition, so we need to balance that out a bit with some disincentives," Mayor Charlie Hales told the Mercury when we reported on the proposal earlier this month. "The ordinance requiring deconstruction itself isn't a 'Eureka!' solution, but it's one of three or four solutions that we hope will create a different picture in the future."

We'll get to the many upsides of deconstruction in a second. First, let's consider a question officials and citizens working to craft rules around the proposal will have to consider in coming months (the city hopes to have requirements in place by Halloween): How much deconstruction of a home will be required to meet the city's mandate?

For the Mercury's story earlier this month, we told of a large, white duplex at SE 15th and Umatilla, built in 1902. And we reported that the company that will be replacing that home with three smaller houses, Beaverton-based Everett Custom Homes, had voluntarily elected to deconstruct it. But here's what the company didn't mention at the time: It was only going to deconstruct it halfway.

If you walked by the home Wednesday, here's what you would have seen. 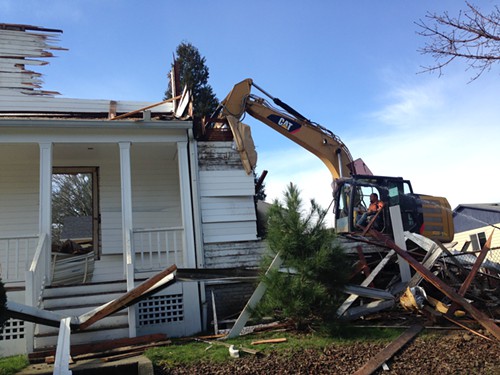 Hardly the picture of painstaking care that deconstruction typically conjures. Molly Ishkanian, with Everett, says the company made the call to remove only pieces of the house that would be marketable—things like quality floorboards and trimming, and vintage knobs on doors and drawers. The rest will go to the landfill.

"If you would have gone inside the house you would have seen it completely gutted," Ishkanian says, noting Everett isn't obligated to do any deconstruction at this point. "There’s only a certain degree that you can do with each property."

A brief rundown of benefits of deconstruction, according to proponents: It creates jobs (more manpower is needed), keeps valuable materials (like the old growth wood used in old homes) out of landfills, reduces carbon emissions by reducing demand for new building materials, potentially results in less asbestos dust blanketing a neighborhood, and (maybe) makes developers shy away from removing an old home altogether.

But here's the thing: The city hasn't developed any hard and fast rule, yet, for how much of a home will have to be deconstructed under the new rules (which only apply to homes built in 1916 or earlier, or which have an historic designation).

"We want to explore that," says Alisa Kane, a green building manager with the Portland Bureau of Planning and Sustainability. But Kane can't put any specificity into what a requirement might entail. She does note, though, that Everett would certainly required to deconstruct more than half of that big white duplex, if it were tearing it down in November.

"We definitely would want to see more than what they are doing," Kane says. "This will be a bit of a public process."

At least one person participating in that process says the deconstruction requirements need to mandate far more than just 50 percent of a house. Jordan Jordan, a used material broker at Portland nonprofit Earth Advantage, tells the Mercury: "It's my expectation that code will require "full" deconstruction."

So what's that mean? Jordan can't say yet. It'll be "defined by staff, with input from the [city's] Deconstruction Advisory Group," he says.