Nate Miller
Moment of Realization: You will never white-knuckle your steering wheel across the old Sellwood Bridge again, nor pilot your bike in wobbling frustration o'er it's 2-mm-wide sidewalk. The Old Sellwood is closed for good. Long live the (slightly late, and a touch over budget) New Sellwood—which doesn't open until Tuesday at the earliest, so find another route.

ICYMI, we wrote about a bill this week that could have shielded police officers' identities after controversial shootings (provided there was a threat to those officers). It cruised through the House with zero problems, but now it looks like it'll die in the Senate. That's what Senate Democrats are saying, anyway, and they control what happens there.

Well, they sort of control what happens in the Senate. Republicans, fed up with the overwhelming Democratic majority in Salem, are trying anything they can to stem the tide of bills they dislike—like (of course) one that would essentially eliminate Oregonians' use of coal-fired power, and ramp up renewable energy. So they've got some fun new tactics! Forcing every bill to be read aloud, for instance, and refusing to show up to evening sessions. The Senate's Republican leader, Ted Ferrioli, tells the O: "If you saw an Oregonian getting mugged on the street and stopped the mugging, would you call that person an obstructionist?"

Another bill that looks like it'll fall prey to this dynamic would close a loophole in state gun-control laws that allows firearms dealers to sell someone a gun if that customer's background check is taking too long. The proposal: Why not just wait until the background check is complete before you hand over the gun? Too controversial!

Speaking of: Here's an obligatory note about the latest mass shooting. This one at a Kansas riding lawnmower factory, where an employee opened fire indiscriminately after driving through several towns, shooting out the window of his car. Cedric Ford was killed by police. He murdered three people and injured a bunch more.

How did stained glass makers like Portland-based Bullseye and Uroboros wind up with air regulations that allow them to emit large amounts of toxic heavy metals, anyway? It turns out Bullseye lobbied quite hard for those loose rules, arguing that art-glass makers could hardly be lumped in with other glass outfits subject to stronger regulations. And it worked!

After leaving it be for a couple months, the city swept a large homeless encampment that had taken root under the west side of the Steel Bridge. That's in line with a new policy Mayor Charlie Hales is pursuing, which allows camping in some instances—but not permanent camps in city parks.

The Trib's been asking Jules Bailey who his clients were when Bailey was a private economic consultant several years back. The mayoral candidate's steadfastly refused to say, and his camp even argues "asking a consultant for clients is like asking an attorney or doctor." I can go online right now and tell you the attorneys who represent literally thousands of Oregonians, Bailey camp. It's one of the easier things to figure out actually. So....

Clatsop County District Attorney Josh Marquis, never one to shy from the warm limelight of controversy, is wading into the Ammon Bundy case. Marquis says he doesn't like how Bundy's attorneys have conducted themselves, so he's filed a complaint with the Oregon State Bar.

I have no idea what a "noodle machine" looks like, which makes the specter of getting my arm caught in one—as a man did yesterday in North Portland—unspeakably gruesome.

Update: After writing the above, I looked up "noodle machine". It's not pretty.

Super Tuesday is nearly on us, folks, meaning Donald Trump may have the Republican nomination sewed up by this time next week. What's Marco Rubio doing to forestall that? He's going all Donald Trump on Donald Trump. 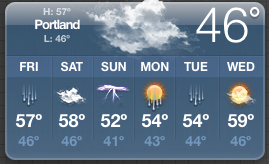