Portland police finally showed up again to its civilian volunteer oversight committee Wednesday evening, as they were legally required to do after skipping last time, to face an appeal by a man who said a sergeant unfairly roughed him up and an officer wrongly tased him as they were taking him into custody while he was having a mental health crisis in 2014.

The Citizen Review Committee (CRC), a volunteer offshoot of the city auditor's Independent Police Review that hears police complaint appeals (and votes on whether the bureau's decisions on exonerations could have been made by a "reasonable person" based on the information they're provided), sided overall with the Portland Police Bureau against appellant Matthew Klug.

The PPB had exonerated the sergeant of any wrongdoing and the CRC agreed to exonerate him, 8-0, but with a debriefing (essentially a formal talking-to about how the situation could have been handled better). The PPB previously found the officer who tased Klug "exonerated with debriefing," and the CRC voted 7-1 to affirm that, based on the "reasonable person" standard of review. The lone dissenter was Kiosha Ford, who voted to challenge the bureau's finding.

Lt. Mike Frome — the sergeant's boss — and folks from Internal Affairs showed up, as required. They brought with them the department's Taser training specialist. Assistant chiefs Donna Henderson and Bob Day showed up, too, and sat behind them in support. Police union head Daryl Turner stood at the back. All of them walked out together shortly after the votes took place but before the meeting was officially over, much to the annoyance of people in the crowd who wanted them to stick around for the final public comment period.

The chaos and contentiousness seen at the last two CRC meetings—marred by a water attack on a CRC member who sided with police and then a police boycott two weeks ago—was replaced with confusion about procedures for the meeting and which departmental taser rule applied to Klug's case.

Klug stated that the police directive in place at the time of the incident for using a Taser was updated more recently than the policy the bureau and the CRC used to clear the officer, citing a December 2013 Mercury story that included new updates in the bureau's use-of-force policy. The PPB and CRC used rules that were outdated at the time of the incident, Klug repeatedly told them, to no avail.

"I can say for sure they were using the wrong directive," Dan Handelman of Portland Copwatch told the Mercury, though it's unclear if the outcome of the complaint would have changed, he said.

Matthew Klug is publicly open about his traumatic brain injury, epilepsy, and diagnosed mental illness. In September 2014, he was riding his bike in the Pearl District when he got into an altercation with the driver of car who he said bumped his back tire in a bike lane and drove off. Klug, after catching up with the driver, says he just put his hand on the driver's window to try and get her attention and information. The driver says he punched the window and was screaming at her.

A nearby police sergeant responded. Klug was upset about what was happening, screaming "why are you stopping me?" He moved to the sidewalk, reached into the pockets of his shorts and tossed his wallet and keys in front of him. The sergeant thought he could've had a weapon, per a summary of his statements. Klug told the CRC he was "scared shitless" when the sergeant grabbed for his service gun. There was some commotion as the sergeant tried to push him against the wall and handcuff him as backup arrived. Two more officers showed up. One of them took out his Taser and tased Krug and took him to the ground. The officer tased him six times. The three of them subdued Klug and arrested him. 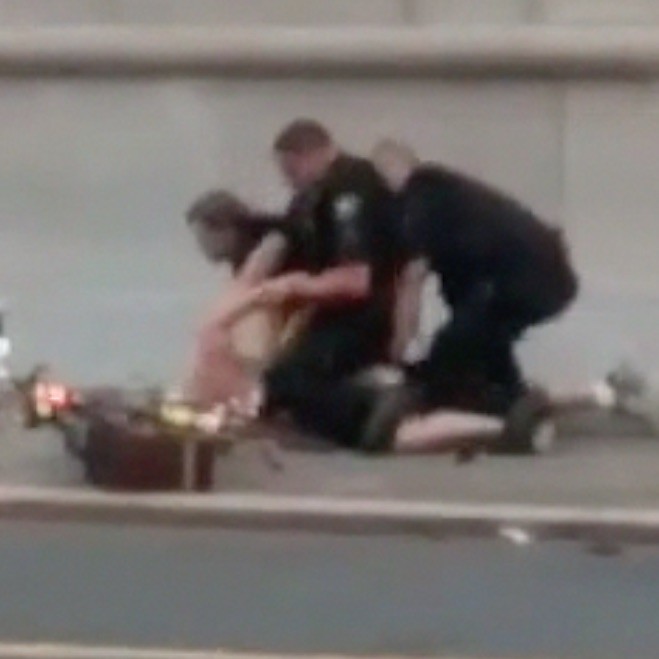 After Klug was detained, sitting in the back of a patrol car, he says the sergeant told him "It's a good thing I didn't shoot you." Klug was taken to jail without medical care and treated poorly, he says.

Lt. Frome told the CRC he exonerated the two because Klug was "engaged in aggressive resistance" and "all of these decisions are justified based on Mr. Klug's behavior."

The CRC's Kiosha Ford disagreed: "I think that the entire episode was just unnecessary and there were so many different ways it could be handled," she said. "It could have went all the way wrong."

Others on the CRC didn't like the way the police handled the situation—particularly the lack of deescalation techniques on a person having a mental health crisis, which is the focus of the DOJ probe—but they couldn't side against the police's decision based on the standard of review they are expected to apply. Again, they are only allowed two options, per their rules:

The CRC can affirm the finding, meaning that it believes that a reasonable person can make the same decision based on the available information, whether or not the committee agrees with the decision; or

It can challenge the finding; meaning the committee believes a reasonable person would have reached a different finding based on the available information. The CRC can recommend a debriefing as part of a challenged finding.

So they unanimously voted to slightly challenge the bureau's decision to simply exonerate the sergeant by voting to "debrief" him, too. They voted 7-1 to keep the bureau's "exonerated with debriefing" finding for the Taser-happy officer.

"They should have found (the officer) out of policy, but they didn't," Dan Handelman told the Mercury after the meeting, "because they are constrained by this standard of review that says they have to say if a reasonable person could have come to that decision, and they're to afraid to go outside of that."

The next Citizen Review Committee appeal hearing is Wednesday, May 18, at 5:30 p.m. in the Portland Building.