TBA Review: The Effervescent Spirit of AU and the Camas High School Choir 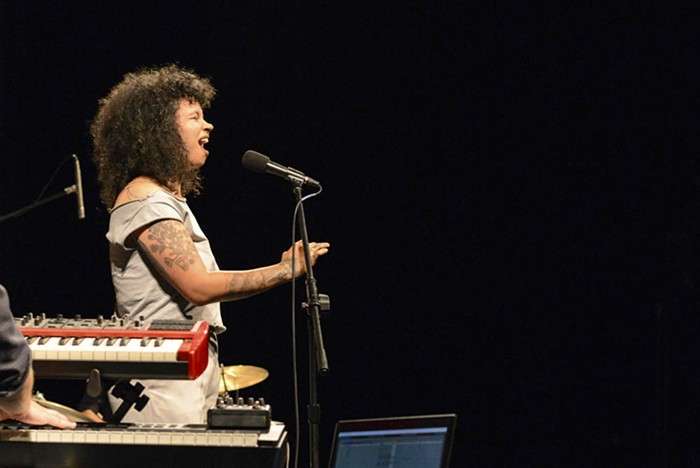 It was the most life-affirming night of music I've experienced in some time. Briana Cerezo

Luke Wyland's music, primarily written for his band AU, has always been deeply felt work. Even at their most bombastic and buoyant, with both he and drummer Dana Valatka creating ground-shaking rumbles, the emotions in each song are never far from the surface, and they're impossible to ignore.

That feeling was only trebled on Wednesday night when Wyland presented new material and versions of some of his best AU compositions that featured the singers of the Camas High School Choir as part of his musical palette.

Wyland began working with the ensemble and their director Ethan Chessin during the last school year, guiding them through this material and the minutiae of the music industry. It all culminated in a performance at Yale Union last April that was so well-received and much talked about that it's being repeated at TBA this year. 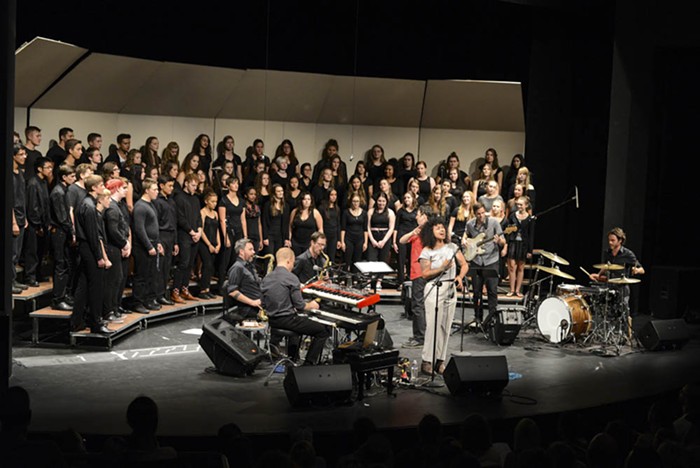 Lyrics weren't easy to pick out of the swell of instruments and voices lifting and diving as one or being loomed together with intersecting melodic phrases. But it wasn't at all heard to get at the heart of what Wyland was attempting to convey.

The piece started off moodily with Wyland singing of separation ("You are the sun and I am moon") over some minor key piano chords. The choir took this thread and echoed his sentiments, adding to the heartache at the center of it all. As it rolled forward in heaping waves, the other players on stage were brought into focus. Blue Cranes saxophonist Reed Wallsmith stood up and let out a roaring Eastern-inspired solo. Vocalist Holland Andrews (who performs on her own as Like A Villain) took aria-like solos that cut through the tumult of the music like a flaming arrow. 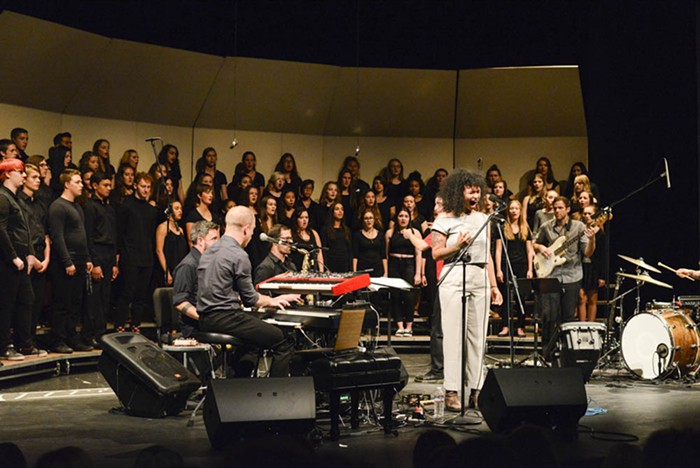 As the hour-long set started to hit the halfway point, air and light started to enter into the music. The choir started rubbing their hands together to create this wonderful hissing sound while growling, hooting, and ululating giddily. It eventually turned into a nice steady clapping that the rest of the band (rounded out by bassist Andrew Jones and Joe Cunningham on tenor sax) latched onto and amplified. The effect was like gleefully tumbling down a hill with a gaggle of kids. That was only amplified when the choir started repeating the phrase, "All my friends are here," as they slipped their arms over one another's shoulders.

Intentional or not, the set list seemed to convey this emotional journey of recovering from a huge loss and finding relief, encouragement, and acceptance among loved ones and through the pure power of music. In that respect, it was the most life-affirming night of music I've experienced in some time, leaving me downright aglow with joy.

It didn't hurt that there was so much pure elation being exhibited onstage. The members of the choir adore Chessin and the feeling was clearly mutual. As things got goofier and goofier onstage as everyone merrily skipped through a version of "Are Animals" (found on AU's 2008 album Verbs), the kids on stage jostled and danced and shared lots of knowing smiles and laughs. There was no way to not get caught up in that collective effervescent spirit and carry it with you into the night.