Disrupt a City Meeting? You Might Soon Face A Months-Long Exclusion 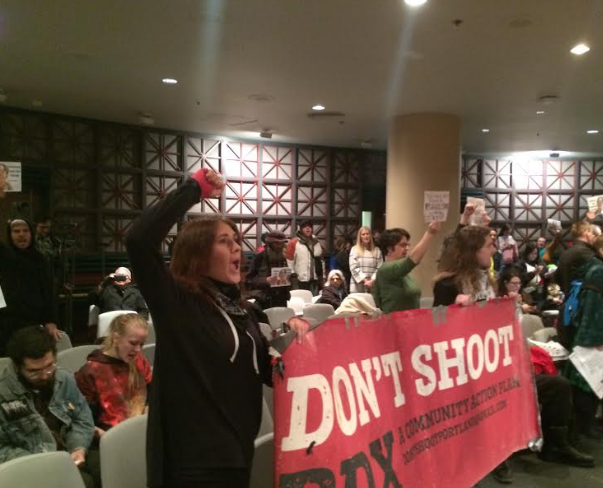 Portland protesters—ever more adamant in their efforts to shut down Portland City Council meetings—may soon have to find another venue.

In a proposal he's been working up since before he took office, Mayor Ted Wheeler next week is preparing to introduce new code language that would allow disruptive audience members to be kicked out of Portland City Hall and other public meeting spots for two months at a time.

And since the proposal will be put forward on a fast-track "emergency" status, it could go into effect right away, without a "second reading" and the usual 30-day lead in time for new ordinances.

The policy—which appears to have broad support among city council members—sets forth rules by which the mayor, city commissioners, and other people in charge, must warn people the consequences for "disruptive" or "dangerous and threatening" behavior during city meetings. Once warned to stop, attendees can be ejected from a meeting.

That's not much different from how things work today, though.

The true effect of Wheeler's proposal would be to allow 30- and 60-day exclusions from meetings for repeat offenders. Under the ordinance [PDF] and accompanying code language [PDF], multiple ejections in the course of a year can lead to exclusions of 30 days. And if a person's already been excluded in the last year, their next exclusion would ratchet up to 60 days.

Anyone excluded would have the opportunity to request an appeal before a city hearings officer, who would look to audio and video recordings of the meeting in question to determine the appropriateness of an exclusion. News of Wheeler's policy proposal was first reported by the Oregonian.

We're not just talking City Council sessions, which have certainly struggled to navigate their agendas recently amid protest. The rules would apply to "any public meeting of a City board or commission." In the past year, meetings of the now-defunct Community Oversight Advisory Board helping the city navigate police reform, and the Citizen Review Commission, which assists in police discipline, have devolved into shouting and other mayhem.

"Disruptive, threatening and dangerous behaviors at City Council or meetings of City boards and commissions will no longer be tolerated," the ordinance says.

The proposal is largely a return to how things worked as recently as 2015. It's an attempt by Wheeler and the City Attorney's Office to grapple with a ruling issued late that year by US District Judge Michael Simon.

At the time, Simon was considering the case of Joe Walsh, a retiree and constant, shouting feature at council meetings, who contended that a 60-day exclusion he'd received was unconstitutional. The judge agreed, taking issue with the fact that Portland's code offered officials the ability to exclude people indefinitely, and saying protesters shouldn't be able to block people " for possible or assumed disruption in the future."

Simon did leave the city an opening to change its own law in order to conform with his ruling, and the City Attorney's office clearly believes this will pass muster.

"The previous measure allowed the director of [Bureau of Internal Business Services] to exclude someone indefinitely," says Michael Cox, a spokesperson for Wheeler. "Now we’re putting some strictures in place."

Since the ruling—if not necessarily because of it—Portland City Council hearings have gotten to the point where you can pretty much expect a disruption week to week. Lately, demonstrators have been circulating their intent to "shut down the shit show" and threatening to stop council from doing any business until a list of changing demands are met.

Those have included calls for the city to increase shelters for the homeless (which it had already been doing), demands that Wheeler answer for forceful police responses to recent marches (he's since done that), and, yesterday, pleas for justice for Quanice Hayes, a 17-year-old who was killed by a Portland police officer on February 9 (an investigation into that shooting is underway, which is common to all officer-involved shootings).

The repeated interruptions on Wednesday led council to meet instead in a conference room on City Hall's third floor. Reporters had to show credentials to even be admitted into the locked-down building.

Portland City Council meeting in the "Rose Room" at City Hall on Wednesday. Members of the general public weren't allowed in. Dirk VanderHart
The demonstrations can have a variety of outcomes. While Wheeler has largely been content to recess council hearings and wait demonstrators out, he's also not hesitated to call police to City Hall. Last week, as one group of officers kept a small clutch of demonstrators from entering the building, riot cops swept in and made arrests.

Asked whether recent events have changed Wheeler's timeline for introducing a new policy, Cox this morning said "it's become a priority."

As we reported this week, the frequent outcry has caused some City Hall staffers to feel increasingly unsafe. A recent survey found that most workers want increased police presence during protests, and a more definite plan for exiting the building during such tumult.

At least one City Hall staffer has been more direct. Jamie Dunphy, a policy adviser for Commissioner Nick Fish, recently obtained a restraining order against a demonstrator named David "Kif" Davis, after he says Davis challenged him to a fight.

Once a council attendee who reveled in testifying repeatedly during hearings (often using profanity and getting kicked out) Davis is now prohibited from setting foot in City Hall and other city properties where Dunphy is working. Records show the man was arrested yesterday, after showing up to a City Council hearing at the Portland Building while Dunphy was there.

Wheeler's proposal stands a very good chance of passage. Both Fish and Commissioner Dan Saltzman support it, according to their offices. Commissioner Chloe Eudaly's office couldn't give her take on the exact language of the ordinance but noted she's been "frustrated" at not being able to carry out council business due to demonstrators. (Multiple city officials have also pointed to an incident Wednesday in which a demonstrator shouted "sit down, bitch" to Eudaly during a hearing. I didn't hear that.)

Of particular concern to this reporter, I should note, is some new language setting forth weapons that will be specifically prohibited from City Hall under the ordinance. That list includes mace, which some people keep on their person for protection, but also ropes in ice picks, sling shots, "nunchaku," guns, pellet guns, and various knives.

One other thing SPECIFICALLY banned from city property? "Any dirk."