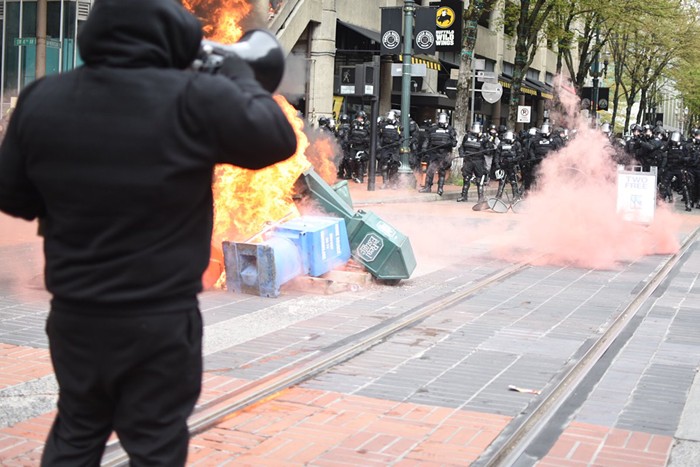 Despite plenty of recent evidence to the contrary, Mayor Ted Wheeler presented an upbeat front when asked Monday morning whether he was concerned about conflicts between demonstrators and police at today's May Day march.

"It’s my expectation that people who are going to be on the street demonstrating will be doing so with peaceful intent," Wheeler said.

It hasn't gone that way. Today's demonstrations have seen the worst property damage since a chaotic protest shortly after Donald Trump was elected president. Windows were shattered at downtown businesses and at least one government building, while anarchists set fire to items in the street.

The chaos followed a day of festivities that included a peaceful rally in honor of International Workers' Day. But events soured when a permitted march through the streets of Portland was called off by police at around 4:30 pm, after a contingent in the crowd began hurling cans of Pepsi toward officers (cops said rocks and other objects were thrown as well), setting off smoke bombs, and damaging property.

"The city has canceled the permit for this march," the Portland Police Bureau announced over a public address system at roughly 4:30. "The march is canceled."

By 15 minutes later, police had set off flashbang grenades when demonstrators refused to heed the repeated warnings. A contingent of demonstrators stayed, threw items at downtown buildings, and set a pile of traffic
cones and newspaper boxes ablaze. One person reportedly shat on the sidewalk in full view of a line of riot police. Others placed cones and other items in the road.

An enormous window at the downtown City Target was smashed. A police bureau SUV had a tire slashed and was tagged.

As of 5 pm, police had deemed the demonstration a riot (an announcement that was met with cheers from some on hand). According to the Mercury's Doug Brown, roughly 100 anarchists were on hand.

Update, 5:20 pm: The conflict, flash bangs, and destruction have died down considerably. Police are detaining an unclear number of demonstrators near City Hall.

Chemical munitions may be deployed near SW 3rd Avenue and Morrison Street. Buildings should turn off HVAC systems in area. #MayDayPDX
— Portland Police (@PortlandPolice) May 1, 2017

Before Pepsis were being thrown toward officers, there was this. Doug Brown