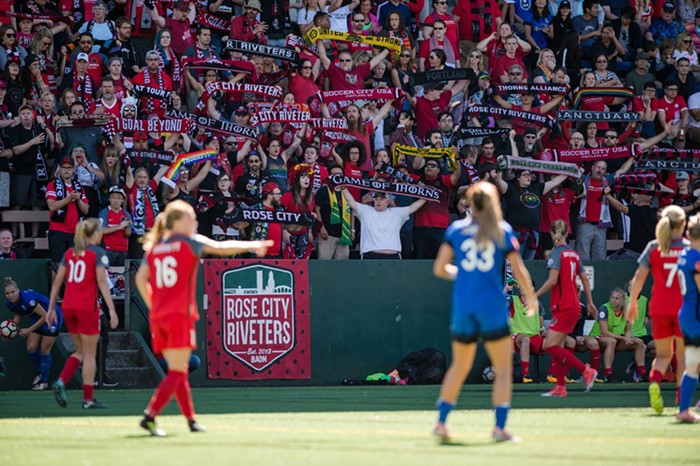 The Riveters were in full force in Seattle! Photo courtesy Portland Thorns FC
For the first time since 2013, the Portland Thorns defeated the Seattle Reign 2-1 in Seattle. BACK FLIPS AND OVEN MITTS! There's something so delicious about Portland beating Seattle in their lackluster, less than impressive, cement structure they call home (Memorial Stadium) TAKE THAT FRASIER!

TWO INTENSE HALVES
There were ZERO goals scored in the first half of the match, but both teams had their opportunities. Each team had a handful of shots that were either too high, just off frame, or staunchly deflected. MOVE IT SEATTLE, WE ARE TRYING TO WIN HERE! The Thorns and the Reign took turns playing reliable defense and driving offense. 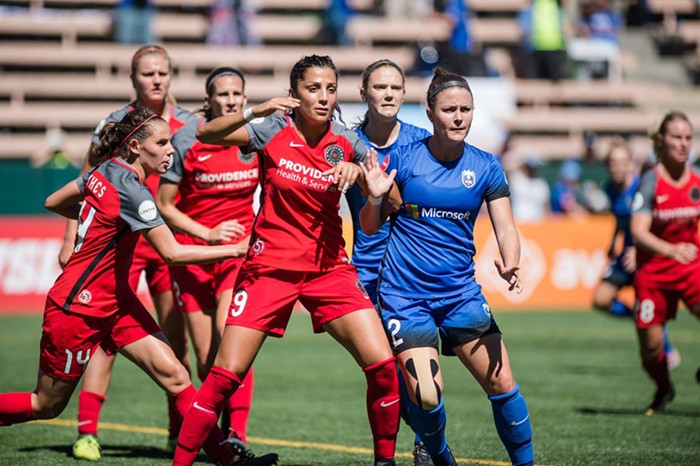 This match was physical from the start. I can also say that about some of the most memorable dates I have been on. Photo courtesy Portland Thorns FC

The first 45 minutes of play felt tense and at times a little rigid—like the beginning of a wedding reception, when everyone trying to figure each other out and assess the DJ.
How far is this wedding party willing to go?
Are we just stepping side to side on the dance floor while the bride’s cousin does the “sprinkler” dance in the middle?
Or is someone going to drop onto the dance floor and do the worm? 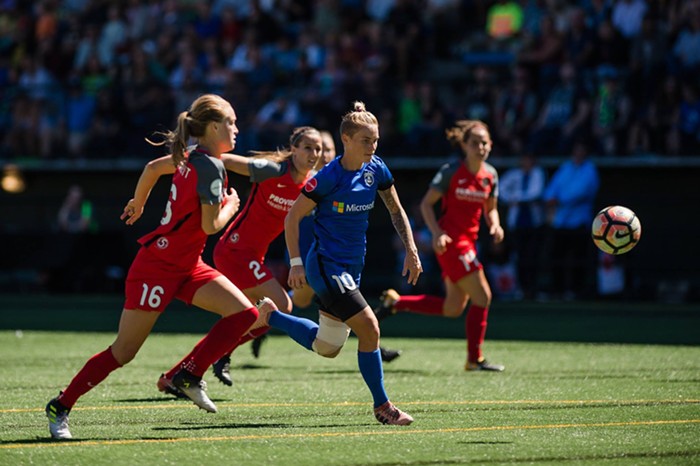 Jess Fishlock is increasingly difficult to keep track of. One of the toughest women in the league right now. IN MY OPINION. Photo courtesy Portland Thorns FC

I did not attend the game, I instead watched it on the computer and got a shit ton of things done around the house. During halftime, I made a deposit at the bank, cleaned the bathroom, switched the laundry, and ate a half bag of Smart Pop for lunch. TALK ABOUT PRODUCTIVE!

The second half pressed forward with increased momentum and after 50 minutes, it was obvious that Haley Raso was DOWN TO CLOWN. Seattle goal keeper Hayley Kopmeyer casually passed to Reign defender Kristen McNabb. This simple pass was received with a little too much touch and when it bounced out of the Reign's easy reach, Raso capitalized on the slight mistake, dribbled forward, then gingerly finished off with a goal! In the words of Gloria Estefan—GET ON YOUR FEET!

MOVES LIKE JAGGER
But one goal was not enough for Haley Raso. She couldn’t get enough! Just like the Rolling Stones song says:
I was raised by a toothless, bearded hag?
NO, NOT THAT SONG. THE OTHER ONE.
She couldn't get no satisfaction!
THAT'S THE ONE!

Christine Sinclair sent a beautiful ball across the field and just in front of Raso in the 85th minute. From there she charged the goal and left the one defender on the ground wondering what had happened. Seattle's keeper blocked the initial shot from Raso, but luckily Raso followed up and finished the shot. LOOKS LIKE THE JOKE IS ON YOU, MEG RYAN AND TOM HANKS—NO ONE SLEEPS IN SEATTLE WHEN HAYLEY RASO IS IN TOWN!

A CHEEKY FINISH
After that goal, there were only five minutes left to play in the match. I had already started packing up the car and let Pat, the lovely woman that was selling me a gently used gas grill from Craigslist, that I was on my way. NOT SO FAST, BARGAIN HUNTER.
Seattle was in a mad rush to get on the scoreboard and in their haste, they drew a mysterious and, in my opinion, cheap foul in the box. Seattle’s Jessica Fishlock knocked the PK in and there were two minutes of extra time put on the clock. WHAT THE FLYING FISHLOCK WAS THAT? I THOUGHT WE HAD THIS GAME LOCKED UP?!

TWO MINUTES OF ETERNITY
In those two minutes, Seattle drew another ABHORRENT foul. This not only gave them dangerous possession, but it also dealt Raso a yellow card. And even though this was Raso’s only card this game, she’s collected enough yellows over the last few matches that she will have to miss the next game. THE LORD GIVETH TWO POINTS, THE LORD TAKETH YOU OUTETH THE NEXT GAME (Job 1:2).

FINALLY
When the whistle finally blew, you could hear both the collective sigh of relief and explosions of elation from the Riveters section of Memorial Stadium. From the sound of it, the Riveters could have pushed their party busses back to Portland. WAY TO REP THE PTFC!

GOOD AT WINNING
On Saturday, Portland became the first team in the league to win 50 games! SPARKLERS IN POTATOES FOR SAFETY! And more good news, the Thorns are still seated in the number two spot in the standings. Dare I say, things are looking good as far as playoffs—DON’T JINX IT JEANIUS!

The BIG FIVE-0 looks pretty good on this team. Photo courtesy Portland Thorns FC
You only have two more chances to see the Thorns play at home in the regular season. You can join me on Saturday at 12:30 pm when the Thorns take on the Washington Spirit—or, if you rather, you can stay home and lament that you were not on this band wagon before the playoffs!
Tickets here!
Follow me @erinjeanius and get to a game for crying out loud!