As Fire Creeps Toward Portland's Water Supply, the City Could Switch to Well Water 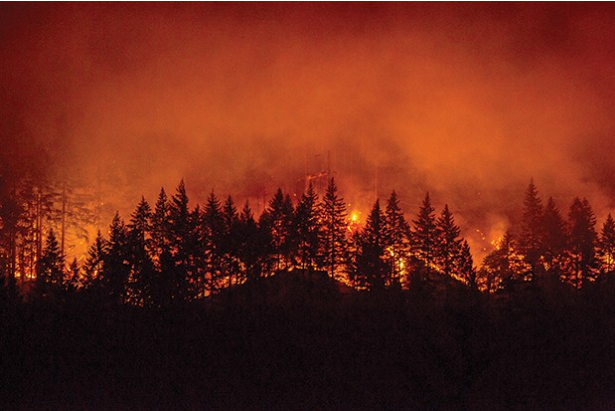 Diego Diaz
The Eagle Creek Fire incinerating the gorge is showing no signs of slowing its explosive growth.


In the last 24 hours, the fire has joined up with another fire—the Indian Creek Fire. What was a 10,000 acre burn at this point yesterday is now estimated at 31,000 acres. And it's creeping toward Portland's water supply.

Yesterday, officials announced the fire had found its way into the Bull Run water shed, Portland's most abundant and treasured source of drinking water. That could mean trouble. So officials are considering switching water systems.

This morning, Commissioner Nick Fish, who oversees the Portland Water Bureau, said that while there's currently no "imminent threat" to the water supply, the city might consider switching to its secondary source, the Columbia South Shore Well Field.

"If at some point it is determined that because of material in air that’s landing in the water, or because of landslides or any other potential risk to our water supply, we will convert to the Columbia water system on an interim basis," Fish said at this morning's Portland City Council meeting. "We may do it earlier rather than later out of an abundance of caution."

More likely, says Water Bureau spokesperson Jaymee Cuti, the bureau would switch over if it evacuates employees as the fire nears.

In any case, if a switch happens, Portlanders could be asked to curtail their water use. Fish says that capacity at the Columbia well field is "slightly below" what the city's able to offer through the Bull Run water shed.

"This would not be the greatest time to leave your sprinklers on all day or take your 15th bath or whatever," he said. "It's not going to be an inconvenience for everybody."

Cuti says it Portland switches to the alternate supply, it's not clear ratepayers will see any change in service. She says water use typically drops around Labor Day, anyway.

"As we move forward in the month, we expect to see demand fall closer to our groundwater capacity," Cuti says. If demand's too high, though, the Water Bureau can ask it's wholesale customers to get some water from elsewhere.

"Should we need to further reduce," Cuti says. "We can communicate with our customers about efficient water use."

After Years of Student Protests, PSU Disarms Its Police Force