One Hit of HBO’s The Deuce Might Hook You 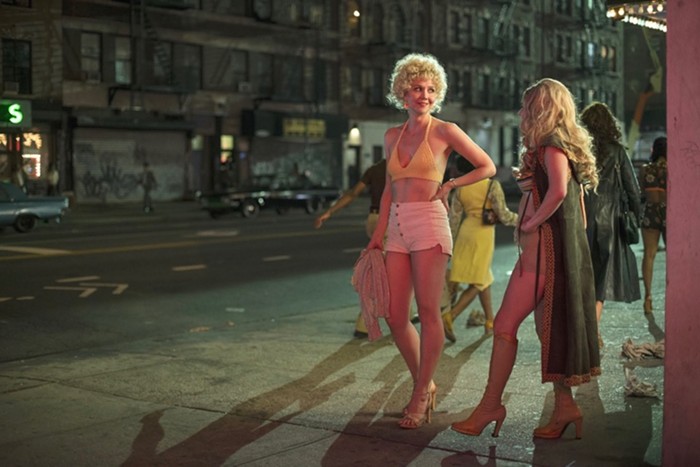 Maggie Gyllenhaal in The Deuce. Paul Schiraldi
The Deuce premieres this Sunday on HBO, and the first episode has already been made available for streaming on the HBO Go and HBO Now platforms. So far, critics have been favorably falling all over the show’s look at early-1970s Times Square and the birth of the pornography industry, and it comes from David Simon and George Pelecanos, who collaborated on The Wire and the underrated Treme. It stars James Franco in a dual role as a pair of brothers, along with Maggie Gyllenhaal, Dominique Fishback, and Emily Meade as street prostitutes, Gbenga Akinnagbe and Gary Carr as pimps, and Margarita Levieva as a Columbia student who brushes up against the New York City underworld. The pilot, which is nearly an hour and a half long, was directed by one of the best television directors around: Michelle MacLaren, whose helmed game-changing episodes of Breaking Bad and Game of Thrones, and did the best she could with the holy mess that is Westworld.

I watched the pilot and was a little confused by my reaction to it. The world The Deuce depicts is decidedly grim, steeped in sex, drugs, crime, and tawdry desperation. The period accuracy is spot-on, and the show seems to exists in the same grimy streetscapes that Martin Scorsese captured in Taxi Driver. (Washington Heights makes an effective substitute for ’70s Times Square, as the real Times Square is totally Disneyfied today.) But the show’s milieu of prostitutes and pimps is almost unbearably hard to share space with; even Gyllenhaal’s self-actualized streetwalker is deeply tragic to watch, and the cruelty of the show’s pimps broke my heart and turned my stomach. Franco’s performance as Vinnie, the less slimy of the two brothers, is one of the best things he’s ever done; indeed the acting is fantastic across the board. But the show’s uncomfortable stare into darkness was hard for me to shake. And you might be feeling that this particular moment—locally, nationally, globally—isn't the best moment for you to dive into something so bleak.

I get that. And yet, as I thought that first episode over, I kept wanting to return. The Deuce’s dramatized climate of vice functions like the narcotics it so unflinchingly depicts, and the characters are so excellently written and played that watching them navigate this hell on earth—a hell peppered with momentary, fleeting pleasures—is entirely addictive, even after one episode. And the period detail is astonishing. My delayed but eventually favorable reaction, combined with unanimous critical acclaim and the pedigree of Simon and Pelecanos, has me excited about The Deuce’s remaining seven episodes. If you haven’t streamed the first one yet, it airs on HBO on Sunday. And if my experience is anything to go off, expect to be repelled, then drawn in—I can only marvel at how the makers of The Deuce designed the show’s appeal to be as sickeningly irresistible as the desperate world of sex and drugs that surrounds its characters.

The Most Misguided Musical Adaptation Since Cats, Dear Evan Hansen Is an Utter Disaster