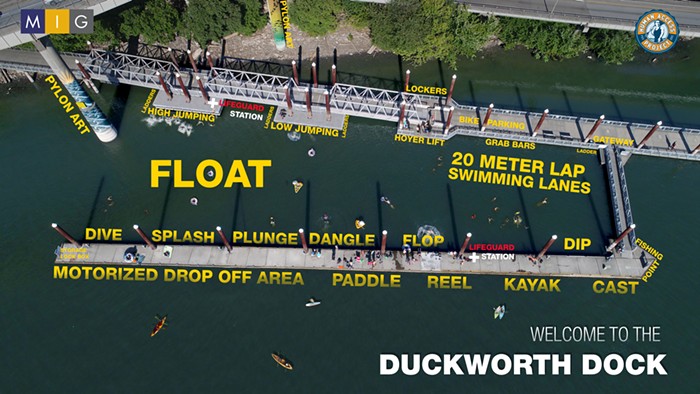 The Kevin Duckworth Memorial Dock—named after the former Trail Blazers great—will be getting some upgrades to create "world class, urban swimming hole" in the Willamette River in Portland, the city announced today, and the design looks it will be an interesting summer hangout spot.

The project is a part of the City of Portland's "Central City 2035" plan, an ambitious blueprint for how the city will grow in the coming years.

As of now, thanks to the terms of a grant to the city by the Oregon State Marine Board that runs through 2021, only motorized boats are allowed to use the dock. The city said in a press release that officials are "actively working with the Oregon State Marine Board to explore mutually beneficial ways to release these restrictions before 2021." They want to make way for swimming, fishing, stand-up paddleboards, kayaks, canoes, inner tubes—all things currently not allowed.

Check out what's planned with this cheesy video:

Here's today's announcement from the city:

Over the last several years, the City of Portland has engaged in a major public outreach project called the Central City 2035 plan which will guide Portland’s growth over the next 18 years. Six big Ideas emerged from this process, one of which is a focus on the Willamette River. Portlanders involved in the outreach process expressed a strong and almost universal desire to invest and reconnect with our city’s river.

In celebration of this historic day, Mayor Wheeler, in partnership with Commissioners Saltzman and Eudaly and Human Access Project is announcing a new vision for an underutilized dock located off the floating section of the Eastbank Esplanade. It’s called Kevin Duckworth Memorial Dock, memorializing beloved Portland Trail Blazer Kevin Duckworth. Landscape architecture firm MIG will unveil a rendering providing a vision for how this re-imagined dock could be reconfigured with minimal investment.

The Kevin Duckworth Memorial Dock’s use is currently restricted for the sole purpose of motorized boating until 2021. In preparation for this date, the City of Portland will actively begin the planning and preparation to convert the Kevin Duckworth Memorial Dock to a non-motorized facility which will allow swimming, fishing and a rest area for stand-up paddleboards, kayaks, canoes, even innertubes. All of which are presently not allowed by the terms of a grant given to the City of Portland by the Oregon State Marine Board until 2021. The City of Portland is actively working with the Oregon State Marine Board to explore mutually beneficial ways to release these restrictions before 2021.

“It’s good government to better utilize this $1.5 million asset that has had little use over the last 20 years. The re-envisioned Kevin Duckworth Memorial Dock will be a world class, urban swimming hole. It will be a one of a kind amenity for the emerging Lloyd District and Inner Northeast Portland which is expected to get more densely populated. Every quadrant of Portland needs to have a way to have access to our cities river and different ways to do it. The more we can get people to the river’s edge and playing in it, the greater connection our citizens will have to our river. Citizens who are connected to our river will take greater care and ownership. Our city needs more river stewards”, Mayor Ted Wheeler.

“From a planning perspective, this will be an innovative way to encourage people to walk or bike to the river’s edge. The Duckworth Dock is less than a five-minute walk from the major transit hub of the Rose Quarter Transit Center and has direct access of the heavily used Eastbank Esplanade. PBOT is excited to contribute to this creative and innovative project”, Commissioner Dan Saltzman.

City officials will be holding a press conference at 10:10 Wednesday morning at the dock.

In 2009, the dock was named after the great 7-foot former Trail Blazers center, who passed away a year earlier at the age of 44. Duckworth was good at basketball:

Weekend Watch List: Night of the Kings, Minari on VOD, and More