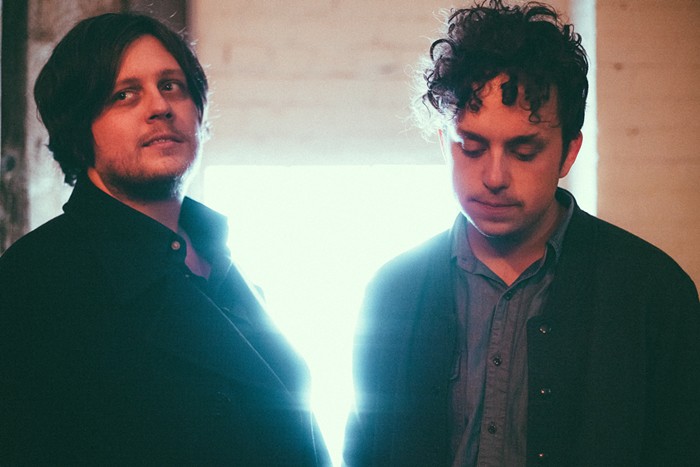 Paste first reported that the band sent out 63 tapes labeled “Trump/Comey Recordings” and emblazoned with fake red “CONFIDENTIAL” stamps to a variety of industry professionals. The tapes included links to a stream of the band’s record sandwiched between audio clips of Donald Trump and someone speaking Russian. According to the band, the majority of the tapes’ return addresses were for conservative media outlets like Info Wars and TheBlaze.

The idea was that the unsolicited packages would bounce back and “flood” the return addressees’ mailboxes. (Which seems neither realistic nor especially prudent, from a marketing perspective.) But here’s why people were upset: The other return addresses were for the KKK headquarters and the Westboro Baptist Church, and according to Paste, many of the recipients were Jewish.

To say that this stunt backfired would not be entirely accurate. It earned the Domestics more national press than they likely would have acquired through more conventional means. Pitchfork—a site notorious for slighting Portland artists, unless it’s in the form of a retrospective—eagerly picked up the news, as did Spin, Billboard, and Vulture.

A ton of backpedaling and a few press releases later, the Domestics emerged relatively unscathed, which raises some interesting questions about the selectivity of internet castigation. They’re still playing a record release show at Mississippi Studios next week with Kyle Craft.

Tender Loving Empire—the Portland label that was set to release Little Darkness—has taken the fall. According to separate statements from the Domestics and their erstwhile label, the gag’s “mastermind” was TLE’s Sync-Licensing and Operations Coordinator Jed Overly, who added the KKK and WBC return addresses to mailers at the last minute without the band’s knowledge or consent. This isn’t the first time a TLE artist has employed a cryptic, borderline creepy PR tactic, either—in 2014, masked members of Magic Sword delivered promotional materials (specifically plastic swords and rolls of undeveloped film) to local media outlets.

As a result of the controversy, the Domestics have decided to part ways with TLE. The national music media was quick to report this development, too—Spin published an article with the splashy headline “Portland Indie Band the Domestics Are Cutting Ties with the Label That Used the KKK to Promote Their New Record.”
And in an extremely counterproductive turn of events, Overly—a Jewish African-American—has been made a scapegoat for the incident, through no direct fault of the band’s. “The employee who did this should be sued,” reads the top comment on the Domestics’ most recent Facebook apology. Another commenter writes, “Nobody at any time should be allowed to walk away from this kind of defamation without having that same defamation come back at them for the true criminals they are!”

The situation, unfortunately, brings to mind YACHT’s ill-advised PR stunt from last year. That band—who come from Portland, but reside in Los Angeles—faked a sex tape leak between its two members, a romantic couple. Both YACHT and the Domestics are, generally speaking, mild-mannered indie bands that employed press tactics that felt more characteristic of Marilyn Manson. Both bands aimed to transfigure “bad” emotions—political anxiety in the Domestics’ case, and disgust in YACHT’s—into interest for their creative projects.

This is not necessarily a new trend in indie music, but it does illuminate a shifting landscape in indie PR. Over the past two years, I have worked on press campaigns both in-house and in collaboration with publicists, and they always result in me banging my head against a wall at some point. Indie PR can range from $500 to $3,000 a month, and album campaigns usually last for three months, which means an average campaign can cost around $5,000.

It used to be that a hefty PR campaign guaranteed at least a modicum of blog placement, which means that the DIY punk band you found out about on Stereogum is not really a DIY punk band. But PR doesn’t guarantee anything anymore, except for a depleted checking account. A handful of firms routinely inundate writers’ inboxes with glossy press releases and advance album streams. When writers receive these emails every day for countless years, there’s bound to be fatigue. It doesn’t help that many of these firms’ clientele have become increasingly homogenous: mild-mannered indie bands.

But if PR is payola-esque symbiosis, then writers are also culpable. We've relied on publicists for so long that we've seemingly forgotten how to seek out artists to cover on our own. Moreover, an independent band with little national infrastructure won’t generate a lot of traffic. For an already flailing industry, what’s the incentive to cover them?

While this doesn’t justify the Domestics’ stunt, it’s easy to imagine a “shocking” promotional tactic for Little Darkness stemming from a dissatisfactory press campaign. There is a sour irony in the fact that, when national outlets finally started covering the Domestics en masse, it wasn’t to write about their music. Maybe they felt that a band of white guys from Portland—a blindingly white city with a long history of explicit and tacit racism and anti-Semitism—sending out weird tapes with return addresses for the KKK and Westboro Baptist Church was worth reporting, and that’s fair. But you have to be pretty oblivious to the machinations of internet journalism not to recognize that this was, at least in part, coverage for the sake of clicks.

When a commercial artist apologizes for an incident like this, that apology is almost always verbose, overly repentant, and, worst of all, moored to an insidious subtext: “Please keep buying our shit.”

It’s probably true that none of the parties involved in this stunt deserve to have their professional or personal lives ruined. The Domestics have nobly agreed to donate proceeds from next Tuesday's record release show to the Anti-Defamation League and the Multnomah County Women, Infant, and Children Program. But their apology still arrived in the form of a press release with the email subject line “This isn’t about a record. It’s about setting the record straight.” To me, this reads like a band anxious to retain its fanbase and commercial viability. More than anything, it’s a reminder that the best apology is usually still the one you learn in Kindergarten: “I’m sorry.”