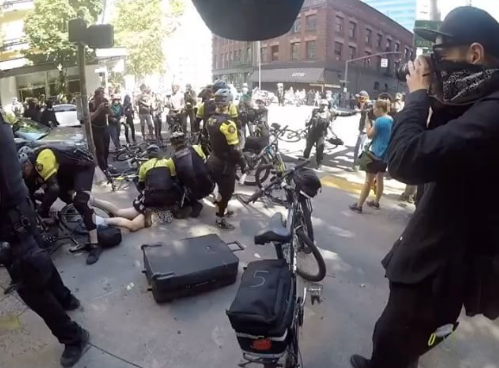 It was a volatile Sunday in Portland and Vancouver. From our reporter Doug Brown who covered this weekend's protests:

Local demonstrations caught national heat for a day that included both a Trump supporter nearly plowing through protesters with his American and Confederate flag-adorned pickup truck, and the president’s large adult son taking to Twitter to rail against Portland antifascists, whom he accused of starting a riot.

Another story has emerged in the days following the protests. There are several video accounts of a Portland Police officer who appears to throw a distraction grenade at an unmasked person with a camera. Here's the original footage:

OPB reports Portland police are "reviewing" this officer's use of a pellet blasting grenade on protesters and media on Sunday. Our @dougbrown8 filmed it (that's him yelling "oh fuck").

If you want to know more, Doug will be on KATU at 5 pm and 6 pm to talk about what happened. Watch the full segment here.