Now more than ever, The Portland Mercury depends on your support to help fund our coverage. Please consider supporting local, independent, progressive media with a a small monthly recurring contribution. Our staff is working morning, noon, and night to make your contributions count. 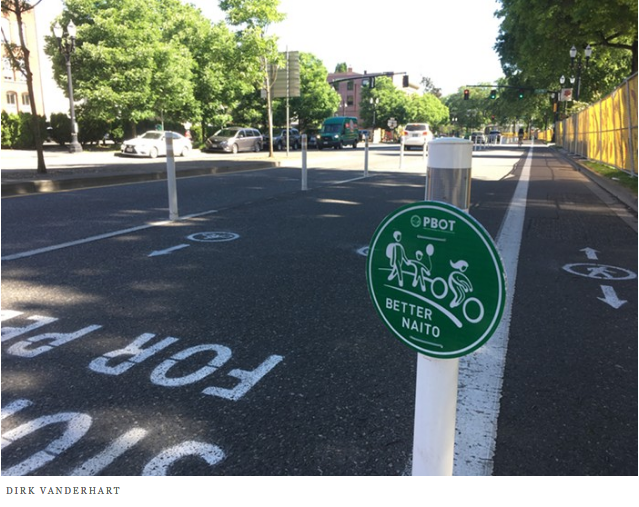 The Portland Business Alliance will mop its dewy brow and breathe a ragged sigh of relief next week, when the "Better Naito" project comes to a close for 2017.

The yearly conversion of a single north-bound traffic lane on Naito Parkway into a path for cyclists and pedestrians has caused unceasing whinging from the city's chamber of commerce this year—and even inspired an ill-advised letter-writing campaign that backfired.

But all good things must end. While former Mayor Charlie Hales once took a shot at making Better Naito a permanent addition to the city's streetscape, for now it's a fleeting three-month treat every year. And this evening it's being celebrated.

In solidarity with the infrastructure shift, groups Bike Loud PDX, Better Block PDX, the Street Trust, and the Go By Bike Valet (you know, beneath the aerial tram) are hosting a "human-protected bike lane" along Naito this evening, beginning at 5:30 pm. (Or 6 pm? there are conflicting accounts.) Basically, Better Naito supporters will be lining up for a half hour or so—in between the still-standing bollards that shield cyclists—to show support.

"This will be a fun event demonstrating support for the temporary installation of Better Naito and advocating that it be improved and made permanent, as well as supporting protected bike lanes city-wide," reads a release from Bike Loud.

It'll also hopefully show the breadth of support this Very Good Idea has in the city. So show up!

The Week in Food News: Openings, Closings, and Music at Mississippi Pizza