I Loved Gerald’s Game, and I’m So Confused

How Did Stephen King’s Most Exploitative Story Become Such a Great Movie? 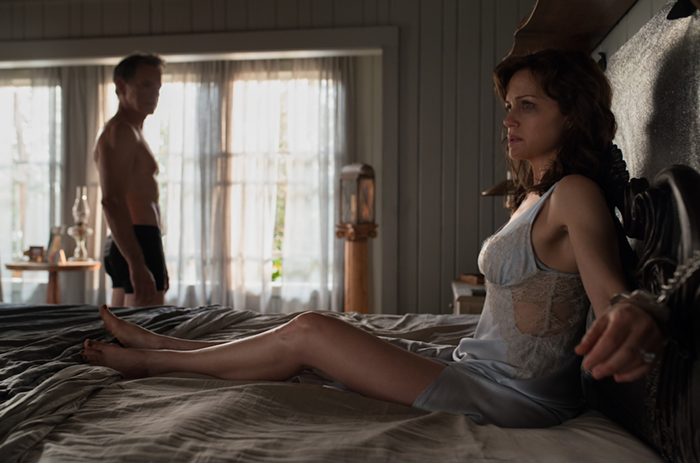 There’s a constant, low-level dread that accompanies being a woman—it’s that unsettling feeling when someone you’re not attracted to hugs you for just a little too long, or when a Tinder date tells a misogynist joke and you have to conduct an entire cost-benefit analysis before voicing your objection. Even in its most innocuous forms, the specter of escalating violence is almost always present. This is a view of the world better suited to Margaret Atwood than Stephen King, but the real horror underlying much of King’s work is the reach of abuse and the cycle of violence, and Netflix’s version of Gerald’s Game embodies this grim leitfmotif better than any King adaption I’ve ever seen.

That’s both good and bad. Gerald’s Game is an amazing document of all of the ways women are subtly and overtly abused throughout their lives. I say “amazing” because it could very well have devolved into simple exploitation, since it’s based on a book about Jessie, a naked woman handcuffed to a bed after her husband, Gerald, has a sex heart attack and she can’t free herself. Oh yeah, and they’ve retreated to a remote wooded area hoping that a little light bondage will save their marriage, so, you know, no one can hear her scream.

What the fuck, right? As far as plots go, this is creeping toward offensive. Fortunately, the movie handles its more sensational elements without making them worse. There’s not a lot of actual sex in Gerald’s Game, what little there is isn't framed in an objectifying way, and Carla Gugino, who is excellent as Jessie, at least gets to wear a chemise throughout her ordeal. And it is an ordeal. From the movie’s opening, in which Gerald (a menacing Bruce Greenwood) surprises Jessie with a rape fantasy and no safe word (JFC, MAYBE TALK ABOUT IT FIRST), Gugino’s eyes telegraph complete and utter discomfort. It’s hard to watch and very real and only gets worse from there, as Jessie, devolving into a fugue state as she tries to escape the cuffs, relives a childhood trauma that bookends Gerald’s more subtly inappropriate behavior with something much darker. Also, there’s a dog eating Gerald’s body AND the Giant from Twin Peaks shows up at night with a box of bones and maybe is a hallucination—or maybe not (*SCREAM EMOJI*).

Perhaps you’re wondering why I liked this movie so much. I am too! The plot is laughably horrible, the sexual violence is VERY upsetting to watch, the ending is a little too tidy, and I haven’t even gotten to the body horror, which made me so squeamish I had to cover my eyes! But against these bad odds, Gugino totally sells her endurance piece of a role. It’s very satisfying that Jessie’s survival hinges not on any external aid, but on her own inner reserves, which turn out to be formidable. Like anyone who’s been through hell, she’s stronger than she looks.

It Review: Here's That Creepy Clown You Ordered!