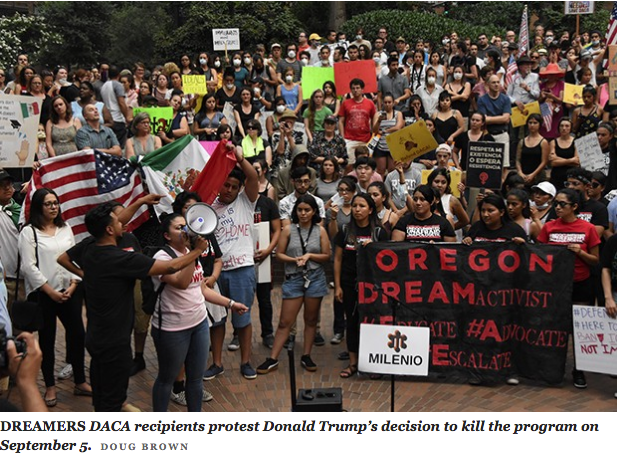 The City of Portland is spending $50,000 to help DACA recipients re-apply for protections and get legal advice.

In a unanimous vote this afternoon, the Portland City Council approved a grant that will reimburse advocacy groups that have been helping "Dreamers" pay the $495 fee to re-apply for protections under the Deferred Action for Childhood Arrivals program, as well as for legal advice.

Since 2012, DACA has offered a measure of certainty to undocumented immigrants who arrived in the country as children, allowing them to work and go to school without fear of being deported. Donald Trump rescinded the policy on September 5, meaning an uncertain future for hundreds of thousands of people. Among the groups that have formed up to advocate for Dreamers is the Oregon DACA Coalition, which has been awarding "scholarships" to people scrambling to re-apply for benefits. The funding for those scholarships came from Causa, another immigrants rights group.

"Unfortunately our nightmare came true on September 5," Causa Executive Director Andrea Williams said this afternoon. "We made this sacrifice because we knew that this could potentially be the last chance in the foreseeable future to provide real protection from deportation and a work permit for DACA recipients."

Today, 31 days after Trump's order rescinding DACA, was the deadline for Dreamers to reapply for safeguards. In the last month, the Oregon DACA Coalition has awarded 54 scholarships, according to Leonardo Reyes, a co-founder. Williams said more than 30 people have received legal services in that time.

The city council's decision today approves a grant of $50,000 to reimburse Causa for its efforts in the last month—money that will be set aside in an upcoming budget adjustment. In a symbolic gesture, the council also reaffirmed Portland's support for DACA, and for congress to pass the DREAM Act, which would reinstate some protections.

The resolution comes weeks after US Attorney General Jeff Sessions dropped into Portland to rail against our sanctuary city policies.