What a team! What a crowd! WHAT A MATCH! Photo courtesy Portland Thorns and Craig Mitchelldyer
The Portland Thorns completely and convincingly pummeled the Orlando Pride 4-1 in a semifinal matchup at Providence Park on Saturday. ROCK SQUATS AND GARLIC KNOTS! THEY REALLY DID IT!

THIS GAME WAS UNREAL!
In true 2017 Thorns style, the first goal came early when Portland midfielder Amandine Henry applied
a slight and precise touch to Meghan Klingenberg’s service to the goal. Sure, the Statue of Liberty is great, but Amandine Henry is, by far, the best thing the French have ever given us. WRAP HER LOOSELY IN FABRIC AND GIVE HER A TORCH! MERCI BEAUCOUP! 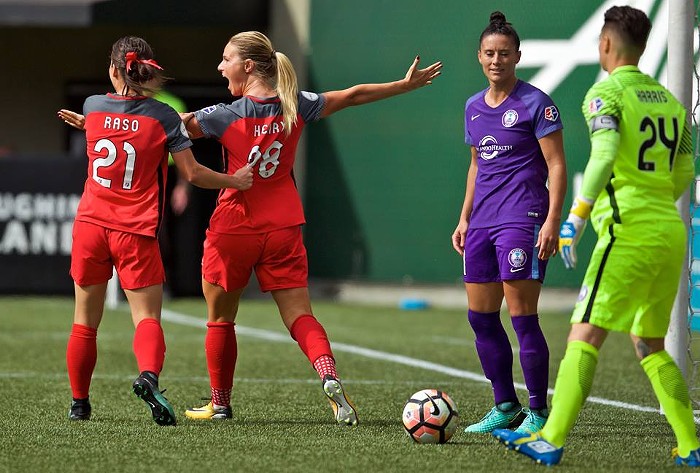 Three or so minutes after the FRENCH ERUPTION, Tobin Heath landed a free kick just in front of the goal for Emily Sonnett to head just out of the reach of Ashlyn Harris (Orlando's goal keeper). HIGH JUMPS AND GOOSEBUMPS – THAT'S PURE POETRY!

Sonnett is FURIOUS WITH DELIGHT! Photo courtesy Portland Thorns
The Thorns dominated the first half. There was a steady flow of EXPLOSIVE ACTIVITY in front of the Thorn’s goal that was conveniently located right in front of the Riveters section. While a lot Thorns fans watched this semifinal match on the edge of their seat – the Riveters seemed to nearly tear the seats from the stadium floor and start a soccer revolution. They spent 90 plus minutes spewing support and singing cheers for the home team. MORE SUPPORT THAN A SPORTS BRA IN SECTION 107!

And while most of the first half was full of Thorny high fives and blood smoke, the Pride got themselves on the board in the 22 minute. Marta crossed the ball in and after it bounced off of a few Orlando heads, it shot right past AD Franch. DOUBLE FARTS IN BERMUDA SHORTS!

The second half brought more of the same. Orlando, MORE LIKE OR-BLAND-O, struggled to find a rhythm together while, the Thorns were POPPIN', LOCKIN' AND DROPPIN' more goals in the net. Fabulous fan favorite, Haley Raso, received the ball from Lindsey Horan at midfield and charged the goal all by her big, bad Australian self. Raso kept perfect pace and stride when BORE – LAND – O'S goalie charged her midway in the box. A subtle touch was all it took and BIP BAM BOOM, I BETTER GET A ROOM – CAUSE I’M TOTALLY IN LOVE WITH THIS GAME! ANOTHER GOAL FOR PORTLAND!

Then, in minute 82, even though we didn’t need it, even if Raso’s goal was already a cherry on top of a terrific Ice Cream Sunday, Nadia Nadim crossed a DELIGHTFUL ball to the feet of Candian Classic, Christine Sinclair. Sinc kept her shoulders high, her head down, squared herself with the goal and poked it right past the goalie. SOMEONE PLEASE GET AN UMBRELLA! THORNS ARE MAKING IT RAIN GOALS! 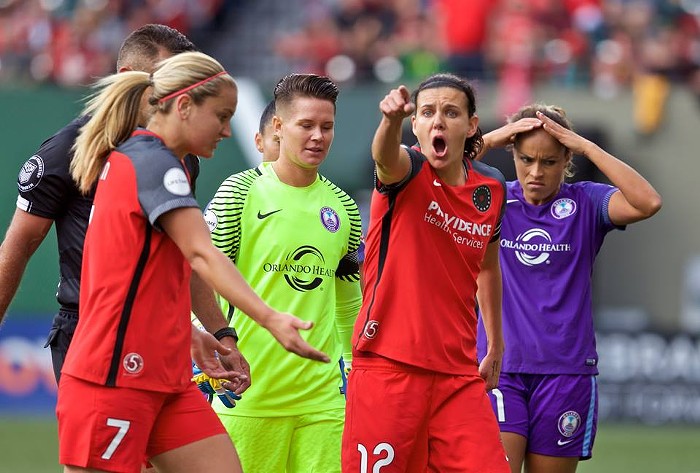 Christine Sinclair does not get angry- SHE GETS GOALS. Photo courtesy Portland Thorns
WORTHY OPPONENTS
Soccer fans have spent a lifetime hearing the legend and lore that is Brazilian beast – Marta. Prior to the match, the Lifetime analysts and reporters had so much to say about MARTA MARTA MARTA . Look, we get it, she’s a force to be reckoned with, her kicks defy gravity and combined with previous Thorn super star, Alex Morgan, defenses don’t know where to look. These two in conjunction with the rest of the OR -LAND - SCHMO team had combined a total of 42 regular season goals and walked into this semifinal on nine consecutive games without losing. They were by all means worthy opponents and had a season of ups after a tough start. The Thorns, however, had their own story to tell. A story that righted the finish of last year. While the Thorns had a very similar lineup this year, it was less about the stardom and more about the team. The 2017 Thorns connected HARD this year. They did not just plug into the game, they were stone cold HARD WIRED to each other by mid season. It was thrilling to watch this team find opportunities for each other and play selfless soccer. The Thorns played for each other and everyone on the field shined their own blinding light. REVVED UP LIKE A DEUCE

NEXT STOP ORLANDO!
Hey Alanis- know what else is IRONIC? Beating a team then traveling to their home to play the championship! BLACK FLY IN YOUR CHARDONNAY! The Thorns will face off with the North Carolina Courage. The Courage won the 2017 shield and have had an amazing season. There is truly, no other team that deserves to be in this final match (Besides the Thorns, of course.) And there is definitely no other team I cannot wait to watch the Thorns CRUSH than North Carolina. 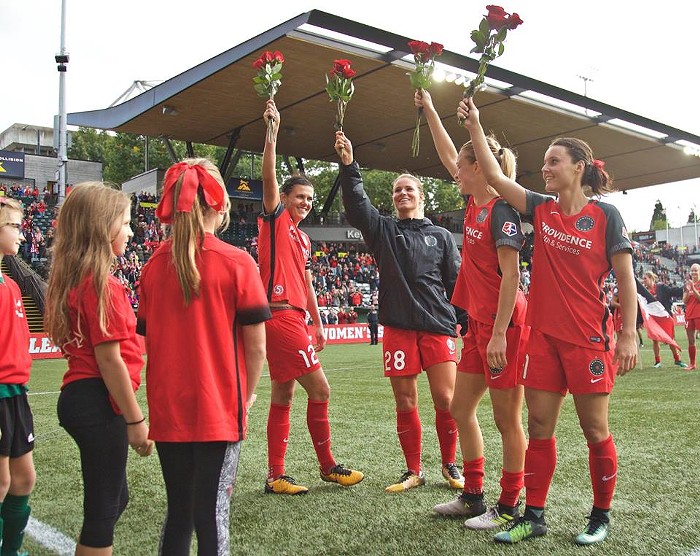 Thorns' fans remember the soul crushing loss in the semifinals last year against the Western New York Flash. Well, the Flash went on to win the cup last year and the Thorns got back to work and are back and even stronger this year. What did the New York Flash do this year? NOTHING, the Western New York Flash no longer exist as a team. That entire team and staff moved to North Carolina, created the Courage and here we are now. You can’t fool us, North Carolina, we know exactly who you are and what you owe us. If the Thorns show up in Orlando with the same “Losing is not an option” attitude the Courage will spend next Sunday with the same gut wrenching sadness we felt last year.

You can watch the game Saturday October 14 on LIFETIME Television or, better yet, you can get your tickets here and head on down to Orlando Florida. OR EVEN BETTER YET, you can bring me to Orlando with you.
LET’S GO THORNS.
AND LET’S FOLLOW ME ON TWITTER. @erinjeanius