Photos & Video: Portland Police Put Hoods, Headphones On Activists for "Protection" From Power Tools. There Were No Power Tools. 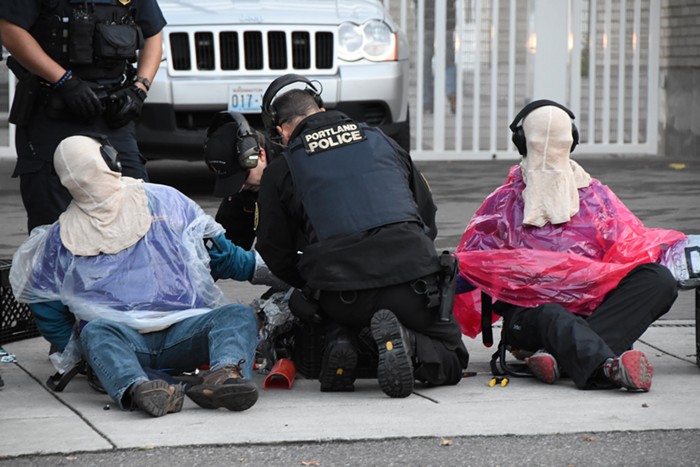 Portland police put hoods and headphones on protesters while separating them, with small hand tools, from the device connecting them Doug Brown

The Portland Police Bureau put hoods over the faces and headphones on the ears of a group of activists linked together before they arrested them. The activists had been blocking the gate to the ICE building in SW Portland yesterday afternoon, protesting deportations under the Trump administration.

Police used hoods and headphones on the protesters, the bureau says, so the activists wouldn't get hit with sparks or get ear damage from the loud noises emanating from the power tools used to remove them from the "sleeping dragon" device connecting the five people.

But the police never used any power tools. There were no sparks that could have hit their faces. There were no loud noises that could have damaged their ears. The so-called "sleeping dragon" in this case—per police, it was made of a plastic pipe, yarn, fabric, chicken wire, bolts, and chains—only required the use of small, non-electric cutters. In short: the hoods and headphones were for "protection" from tools that the PPB did not once use.

Video that the Portland Police Bureau took shows what they used to separate the protesters:

In a statement this morning, as they said to us last night, bureau says it was for their protection. They also say now the hoods and headphones strategy "also prevents the proestors (sic) from intentionally causing themselves injury during the removal and/or falsely claiming injury to halt the cutting." If they can't see or hear what's going on, the theory goes, they can't stop the cutting or try to hurt themselves.

There were five protesters linked together blocking the gate to the ICE building, with four "sleeping dragon" devices linking them together. As police worked on separating and arresting them, they put the hoods and headphones on two protesters at a time—the ones on either side of of the device. When they were freed from the device and cuffed, the cops took the hoods and headphones off and hauled them to the back of the van. The federal cops didn't arrest the final two people in the chain because ICE employees and a GEO prison transportation bus were able to leave using the driveway once the first three were gone.

Three others not in the link were arrested before the cops worked on removing the "sleeping dragon." They refused to get out of the driveway.

On Wednesday, October 11, 2017, at 2:44 p.m., Central Precinct officers responded to 4310 SW Macadam Avenue at the request of Federal Protective Services regarding a protest.

When officers arrived, they observed 20 to 30 protesters blocking the entrance and exit to a building that houses multiple government agencies. The Federal Protective Service (FPS) was the agency in charge of the police response, and the Portland Police Bureau responded to provide assistance to FPS.

People using sleeping dragons, place their hands inside a pipe and lock their arms and wrists together by using handcuffs, chains and carabiner or another method. The pipe is often wrapped in materials that make it extremely difficult to cut. Oftentimes, the sleeping dragon is made of cast iron, metal or plastic pipes, concrete, tar, chicken wire, duct tape, feces and chains. Officers have no idea what is in the sleeping dragons until they begin the process to cut and disassemble them. Officers cannot physically remove protestors who are using sleeping dragons without disassembling the devices due to the fear of possibly breaking protestors' arms, wrists or somehow injuring them.

To remove sleeping dragons, police often must use power tools and because of the variety of materials, there is a possibility of sparks. Since safety is a top concern, officers use protective attire to ensure their safety during the cutting process. This kind of training to place protective attire is from the Center for Domestic Preparedness, which is operated by FEMA, and is national best practice for removal of sleeping dragons or other protestors' devices. PPB has had this training and protective gear for more than a decade. The gear protects the protestors' faces and ears. It also prevents the proestors from intentionally causing themselves injury during the removal and/or falsely claiming injury to halt the cutting.

The sleeping dragons used in this protest ended up being comprised of plastic pipe, yarn, fabric, chicken wire, steel bolts, and chains. The protesters' arms were connected by chains inside the pipe. As officers removed additional layers of the sleeping dragons, they determined they would not require power cutting devices. Once the cutting was complete, the protective attire was removed.

Portland Police only cut the sleeping dragons and removed the protestors who were blocking the entrance/exits to the facility. Once they did so, the community members who were trying to leave were finally able to do so. There were no injuries reported as a result of officers carefully removing the sleeping dragons.

Once the protestors were removed, the community members were able to leave—some had been trapped in their cars for more than an hour-and-a-half.

Protesters linked together with "sleeping dragons" in front of the ICE building in SW Portland. The devices read "STOP THE DEPORTATIONS" Doug Brown

One of the protesters on the megaphone pic.twitter.com/hYT7pG3R5W
— doug brown (@dougbrown8) October 11, 2017 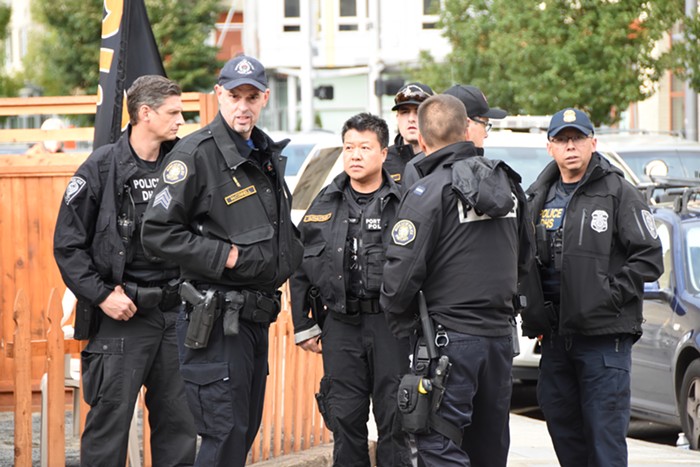 Preparing the van that would haul arrested protesters Doug Brown They then put headphones on them, too Doug Brown Police use a small cutter, not a power tool Doug Brown One of ICE protester who wasn’t arrested: “we’ll be back” pic.twitter.com/MFN5kRVlGw
— doug brown (@dougbrown8) October 12, 2017