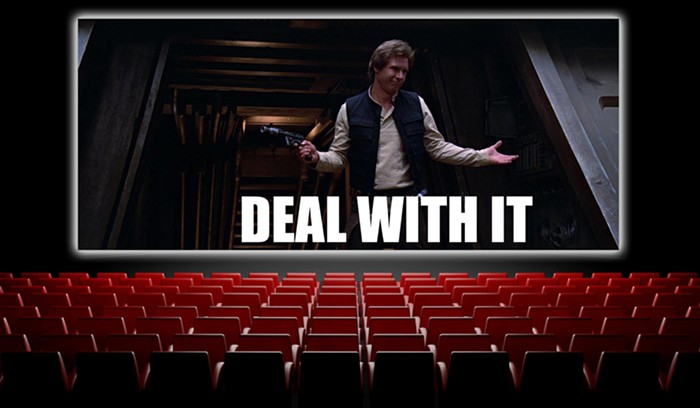 Portland's movie theater landscape is dominated by the Tennessee-based Regal Entertainment Group, the second largest theater chain in the country. Variety reports the chain is planning to experiment with surge pricing.

The move could lead to higher prices for blockbusters and lower prices for unsuccessful films. Three-year-old Atom, backed by Disney, Fox, and Lionsgate, has been pushing chains to take such a step. (Via.)

The past few years, there have been rumblings of corporate theater chains trying surge pricing, but I, for one, found it hard to take them seriously—mostly because moviegoing already seems to be in a precarious state.

Mainstream film offerings are growing increasingly narrow as studios eliminate midrange films in favor of macro-budget franchises and micro-budget horror, and theaters are having an increasingly difficult time luring audiences away from streaming services. ("Summer Box-Office Debacle: Moviegoing Hits 25-Year Low as Revenue Plummets," read a Hollywood Reporter headline last month.) So maybe now isn't the best time to start charging people even more for the movies that they want to see? Or is it*?

So far, Regal hasn't said what markets they'll be testing surge pricing in, or how much more expensive their "demand-based" tickets will be. In Portland, Regal's current ticket prices for standard screenings generally range from $10 to $12, with tickets for 3D and IMAX-branded screenings going for $13 to $19.

As development has heated up around the Lloyd District, the future of Regal's flagship Portland location, the Lloyd Center 10, remains hazy. In 2015, there were reports that the land the multiplex currently occupies would be developed; a few months later, Regal told the Oregonian they were "regarding new theater options" in order to stay in the area.

For the past few years, Regal's been dealing with antitrust lawsuits that allege the chain uses its size to keep its competitors—including local and independent theaters—from showing the most successful films.

Speaking of independent and local theaters, here are the best places to see a movie in Portland. Please note that none of them have surge pricing.

*Okay, everything I "know" about "business" I've "learned" from Shark Tank. I know a lot about movies, but other than being on the receiving end of it, I don't know a lot about consumer exploitation. So for those reasons, I'm out.

Lloyd Cinemas to Be Replaced by 1,300-Unit Mixed-Use Development

How to Watch a Movie in Portland

A Simple, One-Step Guide to Watching a Movie in Portland

So Long, Lloyd Cinemas! You Won't Be Missed