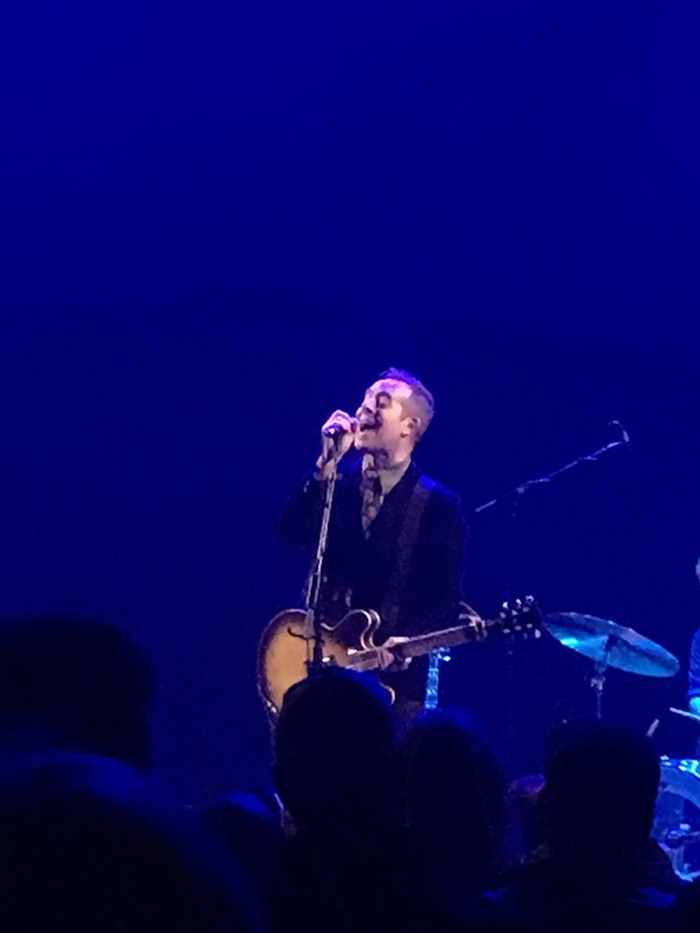 Halfway through Ted Leo’s set last night at Revolution Hall, his band, the Pharmacists—which in its current incarnation consists of two additional guitarists, a drummer, a bassist, and a saxophonist—walked off the stage, leaving Leo to perform a few songs by himself. This mini solo set began with a spellbinding rendition of “Lonsdale Avenue,” the penultimate track on his new record, The Hanged Man, which the songwriter appropriately introduced as “the second most depressing song” in his catalog. Then he launched into “Me and Mia” from 2004’s Shake the Sheets—arguably his most recognizable song, and one perfectly emblematic of golden era-Leo: moddish and wound-up, disillusioned but empathetic.

Afterwards, Leo set down his trusty Gibson ES-335 and sat down at a keyboard on the far right of the stage. “We’re about three-fifths away from ‘angry young man,’ and toward ‘aging singer/songwriter,’” he half-joked, referring to his newer, more subdued material. “And I think the ‘angry young man’ is a concept we need to have a critical reassessment of.”

This self-awareness has resulted in a graceful artistic growth that few of Leo’s peers—and even fewer of his predecessors—can claim. Leo seemed uncomfortable with the “angry young man” model as far back as 2010’s The Brutalist Bricks (which, in hindsight, seems like a transitional record). The more aggressive songs on that album felt largely reflexive, at the same time that a heady, refined pop sensibility began surfacing in his work (“Bottled in Cork,” “Bartomelo and the Buzzing of Bees”).

So the hour-long, Ram-worshipping Hanged Man wasn’t totally unexpected, but that doesn’t make it any less staggering. Even more impressive is how well this material translates live, thanks to Leo’s micro E Street Band configuration and a front line of consummate backing vocalists. Though last night’s performance also featured a bevy of fan favorites, from “Where Have All the Rude Boys Gone” from 2003’s Hearts of Oak to “Biomusicology” from 2001’s The Tyranny of Distance. As befits his profoundly unpretentious persona, Leo aims to please—Mark Kozelek he is not.

But he also thankfully hasn’t followed in the footsteps of his closest spiritual antecedent Elvis Costello, whose live show has essentially devolved into a Vegas revue. Leo’s live presence is basically the same as his Twitter: He readily engages with his audience and speaks in thoughtful detail about the shit that bothers him. “I’m trying to balance the song to talking ratio tonight,” he reassures us. Little does he know, we came for both.