Blazers Recap: The Blazers Get Snagged By The Nets, 101-97

The Trail Blazers are four and three at the Moda Center this season. While that isn’t a losing record, and none of the away teams have completely mopped the floor with the Blazers in said losses, it’s still a slightly disappointing record for the home court.

The Blazers and the fans need to bring that knee-knocking fear back into their guests when they enter the arena. The Moda Center used to be a spooky place for traveling teams. No matter what posturing visiting players did on the court, the raucous Blazers fan base could always put them on edge. This season, visiting teams have had a swagger walking across the home court hard wood that they shouldn’t be allowed to have. Granted, fans don’t win games, but the crowd to court energy transfer is certainly real, and maybe the boys haven’t been feeling it lately. Or, maybe that other round balled game in town has sucked some of the passion out of some otherwise reasonable Blazers fans… but let’s not theorize too much here. The bottom line is something has gotta change at home.

Last night the Blazers locked horns with the Brooklyn Nets. It was a game with some exciting potential because it marked the inaugural return of Allen Crabbe to his former home court. Crabbe got a VERY warm welcome at introductions, so odds are he would feel mighty comfortable once the game clock started ticking. The Nets collectively were sitting on a four and seven record, so they weren’t coming in smoking hot, but every team should always be considered a threat. Brooklyn guard D’Angelo Russell is averaging just shy of 21 points per game, so he has the potential to light teams up. If he's on. 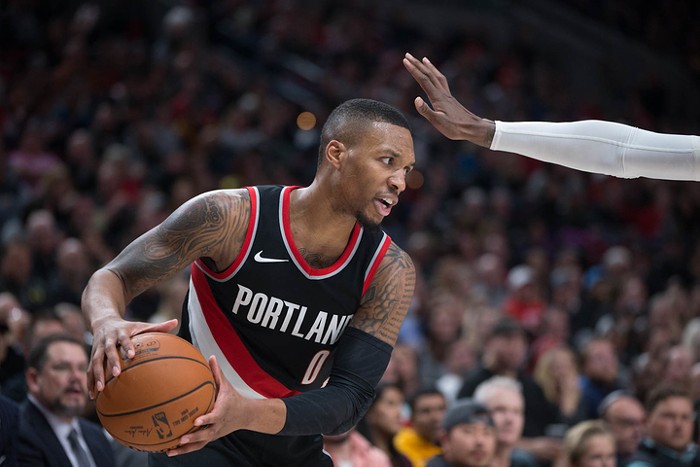 Unfortunately, the Blazers struggled to get a good handle through out, and Russell would help lead the Nets to a 101-97 victory in the final quarter. The Blazers drop their home record down to an even .500. Drag.

Brooklyn center Timofey Mozgov was a huge presence on the defensive side of the court to start the first. Nobody could get into the paint, especially Jusuf Nurkic. Mozgov’s impenetrable wall had Nurk shooting jumpers from everywhere. Which wasn’t an issue at all because he was making them. Nurk went five for eight from the field and sat after ten minutes with 11 points and four rebounds. Crabbe started the game out looking good dropping two big triples and a long two. He was all smiles while doing it.

Pat Connaughton had a nice stroke from behind the arc shooting a big buzzer-beater to end the first, and another long ball to start the second from the other side of the court. The Blazers’ Most Valuable Pat always jumps so high when he shoots threes he looks like he’s gonna bump his head on the Jumbo-Tron.

Russell looked like he was about to start steering the ship after he drained a three to give Brooklyn their first lead of the game. Then he heinously threw the ball away and led to a Swan Lake inspired fast-break and lay up from Shabazz Napier. Later Napier pulled some sleight of hand with the ball in the paint and scooped in a sweet lay-up.

As soon as Mozgov sat in the second, Coach Stotts dropped Nurk back on to the court. He kept working the offense, bumping and grinding his point total up to 15. At the half he was the Blazers high scorer, helping them take a six point lead into the locker room.

Half way through the third the Nets got a hot and tied the game at 65. After a few failed attempts from both teams, Brooklyn’s DeMarre Carroll dunked the ball home and gave the Nets the advantage. The Blazers couldn’t make anything good happen on offense, and the Nets cranked their lead up to ten. CJ McCollum broke the seal and hit a three in the last minute of the third, leaving the Nets lead at seven going into the final quarter. CJ and Damian Lillard needed to wake up in the third if the Blazers were going to chalk up a win. Their combined point total matched Nurk’s 21 points going into the final quarter.

Napier opened up the fourth pushing the pace as much as possible, while CJ and Evan Turner chipped away at the Nets lead with some big threes. Dame finally stepped in around the five minute mark and dumped one of his long distance threes. The Blazers were back in control with a five point lead. But the Nets' Russell wasn't having it. He helped close the gap quickly and put the Nets on top by one with just over three minutes left in the game. Dame did what he could on offense but the Nets had an answer for him every time. Brooklyn had a one point lead and possession of the ball with 41 seconds left in the game. It was another goddamn squeaker! An ill-advised foul from Ed Davis put Russell at the line and gave the Nets a two possession lead with eight seconds left in the contest. After a struggle from wire to wire, miracles were just not in the cards for the Blazers.

At the post-game press conference, Coach Stotts shuffled in looking like a deflated and disappointed father.

“Well, that was a game we shouldn’t have lost, but certainly, Brooklyn deserved to win,” he said. “They out played us after the first quarter, and particularly in the third quarter. They played harder than we did.”

When asked how he would describe where the team was at after 12 games, Stotts simply, and flatly replied, “I wouldn’t,” and all the oxygen was swiftly sucked out of the room.