TBA: Sitting in the Dark, Laughing About Death at Andrew Schneider's AFTER 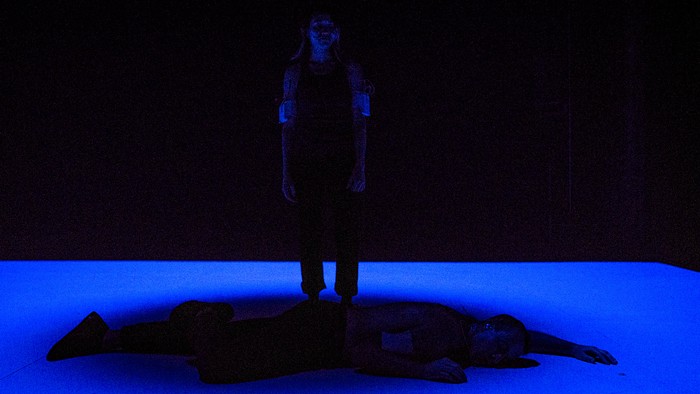 Last night's performance of AFTER, played to a full house. The photographer we sent was not allowed to take photos, but I'm not sore about it because most of the play took place in near total darkness. Photography would have been next to impossible to capture and additional light from a camera flash would have harmed the audience's experience.

While standing in line, I was warned no less than five separate times that the theater would be completely dark for parts of the show. "If you need assistance, hold up your cel phone," a volunteer said. "Someone will come and get you."

I knew that I wouldn't need that, but I also wondered if anyone would and what that would be like for the rest of us. The truth of it was that YES someone did freak out and YES it was kind of a bummer so my advice to you is that if you're thinking about going to see AFTER tonight, but you experience moderate fear of the dark—DON'T GO. The darkness is intense. You are not going to be okay with it, and this is the last performance of AFTER at this year's TBA. 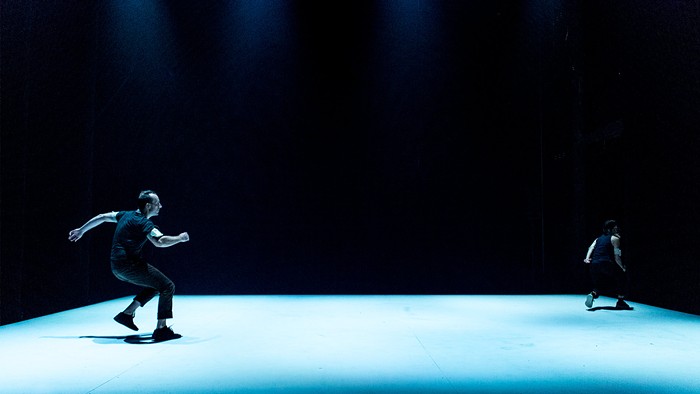 The technical merits of AFTER are jaw dropping. OBIE award-winning writer and performer Andrew Schneider created this piece to challenge the senses of his audience and with the help of his team (including his frequent sound designer, Bobby McElver) he created a wonderful play of senses, the loss of those senses, and what comes AFTER.

Much of AFTER's action takes place during tightly co-ordinated bursts of light that reveal the positions of one or more performers. This gives the appearance of a film montage of still images, but instead these images are created by the performers moving soundlessly on a darkened stage to their next mark. The cues they execute are impressively tight and the main cast are so practiced that there's no hint of the sprint necessary when they move during the three preceding seconds of darkness. Initially I enjoyed AFTER merely as a spectator trying to see how any of it was technically possible. And then the big darkness hit.

The story of AFTER loosely hangs on the thoughts of a woman dying, played by the production's assistant director Alicia-ayo Ohs‎. Sometimes there are more people on the stage, but it's up for debate as to whether any of them are anything more than figments of the woman's dying mind. My second warning is this: AFTER really hammers on natural, human fear of death. If you don't want to be constantly reminded of your mortality AFTER may not be your speed. 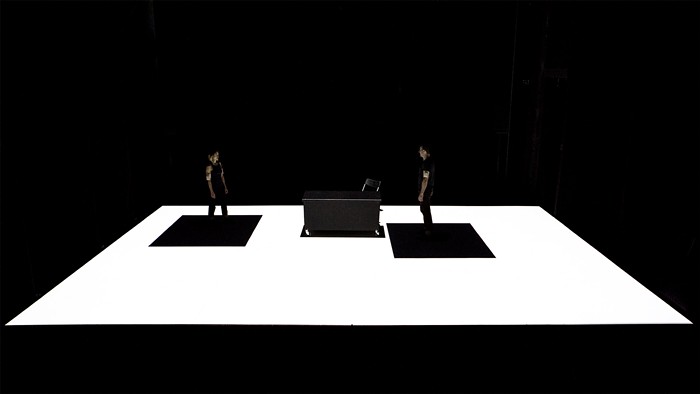 I'm not attempting to criticize AFTER for it's use of darkness or death. The play dances just close enough to these subjects to be challenging, while it remains emotionally survivable (if not enjoyable). Many of the rapid transitions brought on the audience's laughter. Initially, I found the dialogue cloying and similar to people discussing psychedelic drug hallucinations, but as the play progressed this fell away and the dialogue focused in on degradation of self and memory.

In some places AFTER can feel like a 90-minute psychedelic drug trip. This is especially true during the big darkness part of the play where it's easy to enjoy visual hallucinations (similar to how one might in a sensory deprivation tank). Did a ghostly figure slow-motion run across the stage? Was there a dark figure following it? I'm 95 percent sure that happened. I thought I could see the people sitting around me grow to enormous heights and I couldn't tell if performers were sneaking around the darkened theater or if I was just hearing the uncomfortable shifting of my fellow audience members in their seats. THAT IS until some poor person held up their cel phone and ruined the carefully orchestrated illusion.

An alternate title for this piece could have been “The True Star of AFTER Is the Perfume/Cologne of the Person Sitting Next to You." But that had bad SEO. And though a large part of my experience with AFTER related to the way it played with my senses, the scents of the people sitting next to me were mostly ignorable. If you're reading this before the show, perhaps consider the people sitting next to you tonight and don't put on a fragrance. Where you're going, the sense of sight takes a backseat. It’s your senses of sound and smell that step into the limelight.