Review: The Assistant Is a Keenly Observed Indictment of Abusive Bosses 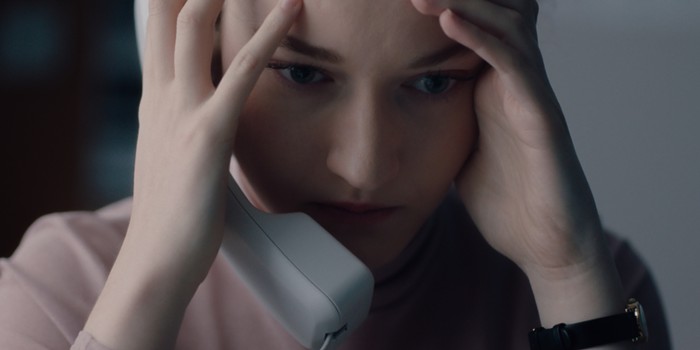 Jane is having a shit day working for a Weinstein-like boss in The Assistant. Courtesy of Ty Johnson/Bleecker Street
Kitty Green's The Assistant works quietly in its condemnation of abusive men in power. There's no passionate monologue about how a system enables a predator like Harvey Weinstein to comfortably exploit women without question or cathartic scenes of abusers getting their comeuppance. Rather, the film focuses on the minutiae of office operations and existence, centering the person least in power—a female assistant—as a means of exploring exactly how abusers are enabled by everyone around them.
Sponsored

Taking place over the course of one day, junior assistant Jane (Julia Garner) arrives at her job working for an entertainment mogul before the crack of dawn. The first one in the office, you see her go through her daily duties: turning the lights on, tidying communal spaces, making coffee, and preparing her unnamed and unseen film industry boss's schedule. As the rest of the staff file in, we are to understand that the intelligent but rather meek Jane occupies the lowest rung in the ladder, a target of ridicule by both her boss and male coworkers.

But amidst all this expected drudgery, Jane has several not normal tasks as well: stocking cabinets with alprostadil (an erectile dysfunction drug), scrubbing her boss’s leather couch of a mysterious substance, returning earrings found on her boss’s floor to scared-looking women, handling phone calls from his emotional and hysterical wife. This has an accumulative effect on Jane, and on this day, she decides to do something about the degradative nature of her job.

Green, who’s Australian, got the idea to do this project while working on a documentary about sexual assault on college campuses in October 2017, just as the Weinstein accusations first broke. She interviewed people who worked as assistants not just in the film industry, but in male-dominated fields like tech, finance, and engineering where workplace harassment often runs rampant, in order to write the kinds of situations Jane finds herself in throughout the movie.

Despite the similarities in industry and conduct, Jane's boss isn't necessarily meant to be a Weinstein stand-in. “I wasn’t interested in talking about him,” Green told the Daily Beast in an interview. “I think the bad men have had enough screen time. I think it’s time we center women in this conversation and talk about how to make things better for women." Though, the Weinstein point is made.

The Assistant's power is in its documentary-like feel. Green observes Jane with an emotional distance that allows us to understand the "impossibility" of her job, while also not letting her get off scot-free. She has dreams of becoming a film producer, and working for this blowhard is a step in the right direction for her; speaking up about the abuses she's witness to would put her dreams in danger. She's smart, an observation/threat nearly spat at her by the slimy HR representative Wilcock (Matthew Macfadyen) in the film's best scene.

While The Assistant is pretty self-contained, it’s perhaps one of the first films in this #MeToo-era to grapple with the people (men and women alike) and corporate structures that allow for abusers to flourish. They didn't arrive into their respective scenes that way, rather, a misogynistic culture that mandated we "look the other way" helped to normalize their behavior. Green did well to focus on the small actions of an assistant like Jane—the devil is in the details after all.

The Assistant opens today at Cinema 21.