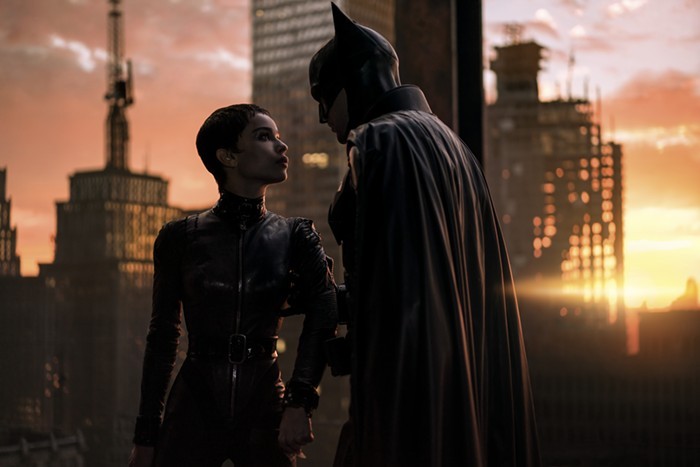 Rather than starting at the beginning of billionaire Bruce Wayne's journey to nocturnal vigilante, the film—out TODAY, FRIDAY, MARCH 4—plops us two years after the Batman made his debut to the citizens of Gotham. The bat signal already sends petty criminals scrambling. "Fear is a tool," spits Bruce (Robert Pattinson) during a voiceover before beating up muggers on a train platform. And when Lieutenant James Gordon (a wide-eyed Jeffrey Wright) brings him around crime scenes, all the other detectives and police officers scowl, like, "This freak again?"

This familiarity ultimately benefits this (nearly THREE HOUR) superhero film, which takes no time to get to the main thrust of its story: some sicko is killing high-level Gotham officials and leaving clues to Batman as to who is next.

The script, co-written by Reeves and Peter Craig, twists some of the iconic figure's origin story (though only once do you hear a character reference "white privilege," thank god). But through all the murk and rumblings about vengeance, perhaps the best thing about The Batman is its moodiness.

Its Gotham is perpetually dark and drippy, with the wet streets reflecting the orange streetlamps above. Much of the action is centered around a slick, underground club pumping loud techno music and crawling with municipal and gang-affiliated scum. Even the car chase sequences with their giant explosions have a gloomy funk. And, seriously, this movie is dark as shit. Cinematographer Greig Fraiser thrust nearly every corner of the film into darkness. Admittedly, making out what's happening onscreen can be a little difficult.

Nirvana's "Something in the Way" is a big sonic set piece. Courtesy of Warner Bros. Pictures ™ & © DC Comics
As for Bruce Wayne, Pattinson's interpretation of Batman's other half has a distinctly emo flavor, dialing up the character's sulkiness. Instead of playing Bruce with a suave, rich-boy swagger, Pattinson's Bruce seems haunted. His long hair looks wet; his ties are skinny; he barely speaks above a whisper. When he gets out of his Batman drag, he often leaves black makeup smeared around his eyes, like a dramatic and reclusive lead singer of an underground rock band. He's even able to recognize Selina Kyle AKA Catwoman (AKA Zoë Kravitz) by her knee-high leather boots, which, to me, says something about his tastes. Coupled with his emotional outbursts, his performance screams "I'M BROODING!!!!!!" A weird choice, but one that works.

But the standout is Kravitz as Catwoman, a burglar bent on getting vengeance for women cast aside by men and the justice system. While her down-with-the-baddies values mirror those of Batman, her looks do it to an even bigger degree—high glossy cheekbones, a cinched waist, skintight suit, and colorful wigs. Her catty cynicism and his sad boi energy play off one another well to create a believable and tense dynamic.

There's more to The Batman than its style, but I should say something about the film's prop and tech design, which is so good and fun. The logo on Batman's armor pops out to become a knife; his suit can turn him into a flying squirrel; the Batmobile is fucking SICK. Batman uses a type of streaming camera placed on contact lenses that allows him to review what he's seen each night, which he gives to Catwoman to use while she's spying on all the baddies. It's reminiscent of the "SQUID" recordings from Kathyrn Bigelow's incredible Strange Days, and it's used similarly in The Batman.

I don't love when huge, blockbuster superhero movies try to say anything about the current state of the world—and, luckily, The Batman generally steers clear of that, giving us its characters and storylines straight without an inflated sense of itself. Well, except for when it comes to the film's runtime. Yes, it feels long. But with style this slick, it's worth it.


The Batman is playing at Cinema 21 and other theaters near you.
Sponsored