Good Morning, News: Skibowl Bans Bikers, an Upcoming Lunar Eclipse, and Do You Have Enough Canned Food to Survive the Big One? 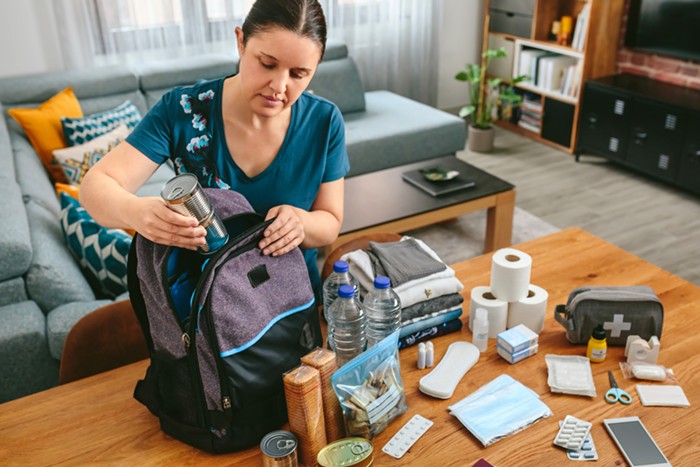 Emergency planners say that Oregonians should have anywhere from one to three weeks of supplies to survive the days following the Big One doble-d / Getty Images
Good morning, Portland! Let's talk about the news.

• Three religious centers in Portland were vandalized and attacked in the last 10 days. Police have arrested and charged one person for all three attacks, but religious leaders say the attacks are further evidence of the increase in hate crimes in Oregon over the past couple years. “Hate speech is not free speech, and it’s important that we recognize that we can’t be complacent about these things,” Rabbi Michael Cahana told the Mercury.

• Last weekend, nearly 200 federal, state, and tribal emergency preparedness planners practiced how they would respond to “the Big One”—the massive earthquake expected to devastate the Pacific Northwest. While the disaster response team is planning to prioritize lifesaving efforts, the earthquake is expected to block off a lot of emergency routes and, according to Office Emergency Management Director Andrew Phelps, Oregonians should prepare to be self-sufficient for at least one week, if not two or three, following the quake.

Oregon Right to Life said their office in Keizer was damaged by an "incendiary device" Sunday night, though quick firefighter response prevented fire from spreading. Keizer fire confirmed they responded & police are investigating a possible arson:https://t.co/Gd3kiKfx55
— Rachel Alexander (@rachelwalexande) May 9, 2022

• If you like mountain biking on Skibowl’s forest trails, I have some bad news. Skibowl has banned cyclists from its trails this summer after having to pay out $10.5 million to a cyclist who ran into a signpost on the trails and was paralyzed from the waist down in 2016. The cyclist’s lawyers said the resort should have used collapsible trail markings, not a wooden sign post.

• Wildfires are a growing threat in Oregon, with scientists noting that the 2020 fires were just the start of state’s fire future. Oregonians have gotten the memo—according to a poll commissioned by OPB, about 60 percent of Oregonians think forest fires are a very serious issue and about 30 percent consider it a somewhat serious issues. But amongst the state’s many candidates for governor, only Tina Kotek and Tobias Read list wildfires as a concern.

Hello, trash lovers! It's time for this week's gossip roundup, THE TRASH REPORT, in which @ElinorJoneser takes on conservative slut-shaming, the Met Gala, and some *very* kinky dolphins. https://t.co/uduILMi93R
— Portland Mercury 🗞 (@portlandmercury) May 9, 2022

• Police in Austin, Texas, will no longer arrest people for low-level marijuana offenses. More than 80 percent of voters (80 percent!!!!!) approved a ballot measure this weekend that prohibits police from citing or arresting people for minor pot offenses, like possessing a small amount of weed or a bong. Smoking cannabis is still illegal in Texas. The ballot measure also banned no-knock police warrants, much to the police chief's dismay.

• The House Intelligence Committee will hold the first public congressional hearing about UFOs in more than 50 years next Thursday. The hearing will include testimony from top defense intelligence officers about 144 unidentified aerial vehicles observed since 2004. Personally, I hope one of those UFOs touches down to say hi—the world is already in chaos, why not add aliens to the mix!

The world is creeping closer to the warming threshold international agreements are trying to prevent, with nearly a 50-50 chance that Earth will temporarily hit that temperature mark within the next five years, a new report says. https://t.co/P3IrmVuhTJ
— The Associated Press (@AP) May 9, 2022

• The former Alabama jail official and inmate she helped escape custody were caught Monday after more than a week on the run. The couple was captured in Indiana after US Marshals pursued and crashed into their car. The inmate surrendered to officials while the former jail official shot herself and was transported to the hospital.

• The Senate unanimously voted Monday to provide police protection to the US Supreme Court justices’ families. The vote was prompted by large protests outside conservative SCOTUS justices’s houses after a leaked draft opinion revealed that the court is planning to overturn Roe v. Wade. Supreme Court justices themselves are already provided police protection, but the bill—which must now be voted on by the House—would extend that protection to their families.

• And, there is a lunar eclipse this Sunday! The eclipse will be visible from the West Coast, but the moon will be very close to the horizon so you’ll need to find an unobstructed view if you want to watch it.

🌑 We're in for a celestial treat this weekend! 🌕