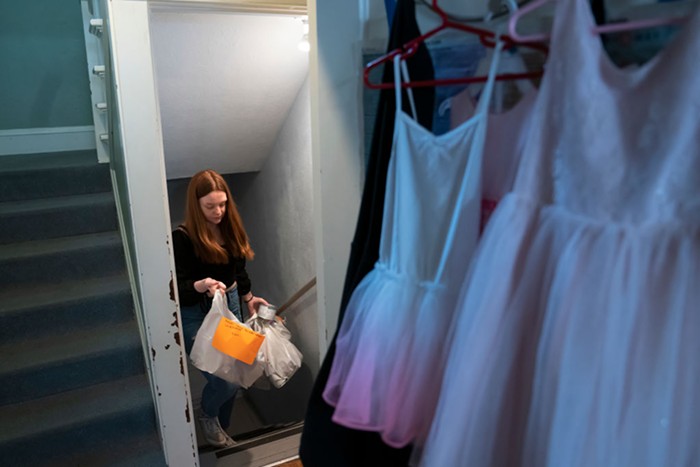 A program coordinator at Mother & Child Education Center disposes of recalled Similac baby formula, which the company would not replace or reimburse because the donated supplies did not come with a receipt. Nathan Howard/Getty Images
Good Afternoon, Portland! I can't tell who in this video is playing the lap steel and it's freaking me OUT. Let's calm down with some news:

• One of the city's first "Safe Rest Village" locations is moving today, from an initial site on SE Water to a new spot in Southwest Portland. However a less than warm welcome to the village's LGBTQ+ residents has left the villagers to feeling hesitant about their new home. Mercury News Editor Alex Zielinski has the story.

• For the past two years, Anis Mojgani has proven a creative pandemic-time poet laureate for the state of Oregon, and we approve of Gov. Brown extending his term for another two years!

• Southwest Portland's Gabriel Park, unveiled its gorgeous new playground today. The site has an in-ground trampoline that’s accessible by wheelchair, a climbing dome, multiple slides, and a rubberized surface connecting all of the play elements.

• Please read the following tweet in Julianne Moore's approximation of a Boston accent.

Portland people: This Tuesday's election is WICKED important! Get that ballot turned in by Tuesday at the latest, and if ya need help, you can count on the Mercury's handy-dandy election cheat sheet! ☑️https://t.co/L7XJLf845Q
— Portland Mercury 🗞 (@portlandmercury) May 13, 2022

• Do you like lush rhymes, free shows, and foresty campout fests? Catch up on this week's Hear in Portland column for the latest local music news!

• Right now, the rising cost of inflation lands somewhere between a bummer and a complete disaster—depending on a number of factors outside our control. But what you can control is checking out this list of cool, cheap stuff that the Mercury's Everout team compiled so that you can have a fun, thrifty weekend:

Despite the ominous narrative of Friday the 13th, it’s actually your lucky day—we’ve got a packed roundup of events that won’t break the bank and will save you the stress of planning. https://t.co/FKqcg4JCIE
— EverOut Portland (@EverOutPortland) May 13, 2022

• There are many bad takes out there about the national baby formula recall and related shortage. What began as with the FDA's discovery of a rare and deadly bacteria in a food processing plant, has called into question the safety of monopolies that control the supply of a direly necessary product.

Name another industry/sector/product like this
— Stephanie Ruhle (@SRuhle) May 13, 2022

• Content warning for clicking on links in this paragraph, Israeli riot police beat people in a funeral march for Al Jazeera journalist Shireen Abu Akleh—who was shot in the head by Israeli Troops on Wednesday. The Associated Press reports that a large crowd gathered to escort her casket from a hospital to a Catholic church. Police beat the crowd indiscriminately, including the casket's pallbearers.

• In Kyiv, a Russian soldier went to trial today—the first such case addressing the war crimes Russian soldiers are accused of committing during the invasion. 21-year-old Sgt. Vadim Shyshimarin is accused of killing an unarmed 62-year-old civilian.

• DON'T YOU DO IT, the US treasury warned international banks (I'm paraphrasing). There are concerns that such banks are trying to help Russians evade sanctions, which are meant to stymy Russia's invasion of Ukraine. The Biden administration warned that institutions caught helping oligarchs skirt the sanctions could lose access to US and European markets.

• GLORY AND HALLELUJAH, the New York Times reports that Elon Musk put his corporate takeover of Twitter "on hold," this morning according to an early morning tweet (the irony!) where he asked for more details about the volume of spam and fake account on the platform. Aaaaaaand now Snoop is dragging Elon (that WAS on my 2022 bingo card!).

Gonna replace the board of directors with Jimmy from my corner Fish Fry, Tommy Chung and tha guy with the ponytail on CNBC.
— Snoop Dogg (@SnoopDogg) May 13, 2022

• Now get out there, and if anyone tries to make you work outside your regularly scheduled shifts, YOU GIVE IT TO'M LIKE THIS: