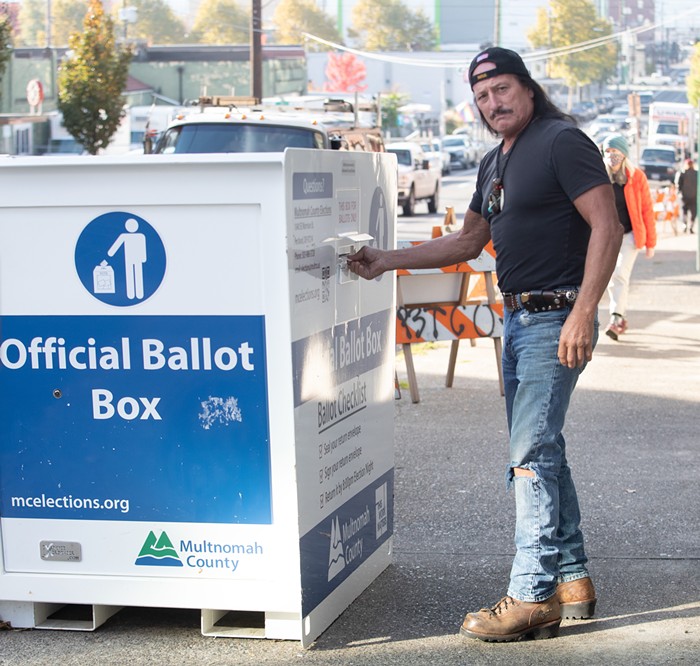 You have until 8 pm to drop off your ballot at a Multnomah County Elections dropbox, just like this cool person. MOTOYA NAKAMURA / MULTNOMAH COUNTY
Good Afternoon, Portland! Another election night is upon us, and this one may be the most confusing yet. Today's top story is about why we may not know who won the region's various primary elections for days. Let's get into it!

• Brand new to Oregon, there's now a law that allows mail-in ballots to be counted up to a week after election day—as long as the ballot is postmarked for May 17 or earlier. What does that mean? It means that you're gonna hear a lot of "looks like," "may result in," and "potentially" during tonight's election night coverage. Have no fear! The Mercury will stay on top of local elections to make sure you get the concrete results as soon as possible.

• We WILL still be sending reporters out to election night parties (those snacks don't judge themselves!) to speak with candidates about how results LOOK after 8 pm. Check back tonight for our infamous Election Night Live Blog!

• Looking forward to Friday—and to the fate of our planet!—climate activists are planning a school and work walkout march to specifically call on Portland leaders for stronger actions against climate change. The march will also call out four “climate villains” that activists say are hindering the city’s climate goals.

• There’s a new type of long-term, committed, romantic partner out there who JUST DOESN'T WANT TO fuck people they love: freysexuals. Cuuuurious? Dan Savage breaks down the new identification in this week's Savage Love.

• Less than a year before Payton Gendron killed ten people in a racist attack at a Buffalo grocery store, state police investigated a "murder and suicide" comment he made to his teacher. The Associated Press writes that, despite the teacher's swift report, the threat wasn’t considered specific enough to warrant further intervention. Thus, Gendron was still able to legally buy an AR-15-style rifle.

Very glad to see national media is paying attention to the embrace of the far-right in the west. This is not only a politics problem, but a religion problem. I’ve been writing about this almost exclusively since 2015. A long thread:
— Leah Sottile (@Leah_Sottile) May 17, 2022

• Today David Chou, a 68-year-old man from Las Vegas, was charged with first-degree murder and five counts of attempted murder, related to the mass shooting that happened at a Taiwanese church luncheon in California on Sunday. Chou was allegedly motivated by hatred towards Taiwanese people. Chilling new details revealed that he mingled with churchgoers for about an hour before chaining the doors, arming himself, and opening fire.

• Also today, the New York Times reports that the Justice Department "made a broad request" for transcripts of the interviews conducted by the House committee that has been investigating the Jan. 6 attacks. The transcripts could be used as evidence in potential criminal cases, to pursue new leads, or as a baseline for new interviews.

• Now GO HOME! Eat something, and tune into our election night coverage. If I find out you are still working—and it isn't election night related—I will send the Workplace Boundaries Cat over to slap your hand away, like so: