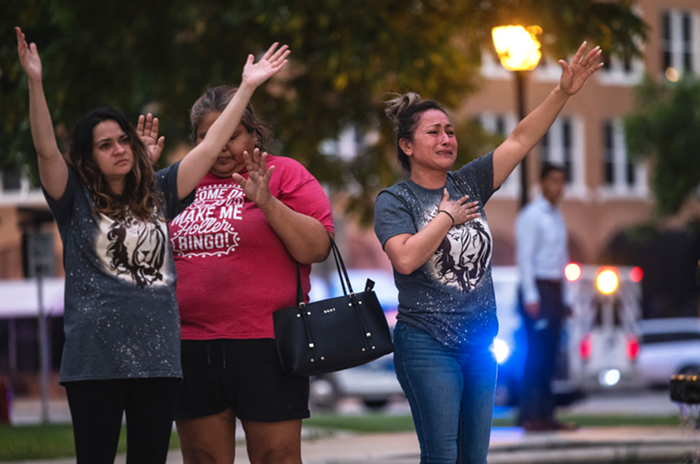 Mourners search for answers at a prayer vigil in Uvalde, Texas, following the mass murder of 19 children and two teachers. Jordan Vonderhaar/Getty Images

GOOD AFTERNOON, PORTLAND! Expect more humid sunniness until tomorrow afternoon when showers return and stretch into Friday. (That what's known as THE WEATHER... what follows now is THE NEWS!)

• Today in SCANDAL!: A jury has found romance novelist Nancy Crampton Brophy GUILTY of murdering her husband four years ago. Brophy is scheduled to be sentenced on June 13, and could receive life in prison with a minimum of 25 years in the slammer. (Let the true crime podcasts ensue.)

• In a bid to please some of his haters, Multnomah County's progressive DA Mike Schmidt is pushing a new/old plan that would put pair prosecutors with community organizations, which he is painting as "social workers" who would assist those with concerns about crime in their area. While some groups LOVE IT (the local biz community) others (such as civil rights advocates) decidedly DO NOT. Find out the pros and cons in this fascinating (and occasionally infuriating) deep dive from our Alex Zielinski.

PPB detective Erik Kammerer has been hit with yet another lawsuit related to his treatment of protesters. Story to come.


• In other local scandals, the (rightfully) beleaguered Clackamas County Clerk Sherry Hall has FINALLY turned in her timeline to the Secretary of State on how her elections office intend on counting all those ballots... you know... from LAST WEEK'S election. She also FINALLY agreed to accept help from the state after being asked THREE TIMES, and that distant howling you hear? Those are the growing calls for her resignation.

• In other election news, things are looking BAAAAAD for incumbent Rep. Kurt Schrader who, barring some miracle, will lose his reelection campaign to Jamie McLeod-Skinner. All we're waiting on are the results from Clackamas County [looks hard at Clerk Sherry Hall], but it appears all is lost for the centrist Democrat who was far too chummy with Big Pharma.

In a statement, Inslee's office said the Democratic governor tested positive on a rapid antigen test and is experiencing mild symptoms, including a cough. Inslee is working from home and setting up antiviral treatments. https://t.co/Jz0OEpfTkI

• The latest hot trend in craft brewing is Japanese-style rice lagers, and if you're looking for a lighter, more refreshing brew, then let Brian Yaeger take you on a tour of the best that the Pacific Northwest has to offer!

ALERT! 🚨 If you like all things *sexy* then don't miss your FINAL opportunity to stream the HUMP! Film Fest... this weekend!https://t.co/vSQqb5n2nM

• Here are the latest updates following yesterday's horrific elementary school massacre that left 19 children and two teachers dead: Here's what we know so far about the victims. As for the murderer, shortly after his 18th birthday (and thanks to Texas Republicans) the shooter legally purchased two semiautomatic rifles and 375 rounds of ammunition. The 18-year-old gunman then murdered his grandmother, and made statements online before the massacre about his future intentions. He was reportedly inside the school for roughly an hour before officers shot and killed him. During a press conference in which Texas Gov. Greg Abbot and fellow Republicans tried to dodge their responsibility for the massacre, candidate Beto O'Rourke interrupted the announcement to say to the governor, “The time to stop the next shooting is right now, and you are doing nothing.”

A student at a Richardson, Texas, high school was arrested Wednesday for carrying weapons in a weapon-free school zone, the day after 19 children were murdered at an elementary school in Uvalde, Texas. https://t.co/4fhdUamttk

Shortly after the nation’s latest mass shooting, which killed 19 children at an elementary school in Texas, the California Senate passed a bill to allow private citizens to file suit against makers or sellers of untraceable "ghost guns." https://t.co/ykkxzq6Q6q

• It's the second anniversary of the killing of George Floyd by police, and demonstrators across the country will marking the occasion (including here in Portland). Meanwhile, President Biden took the opportunity to sign an executive order on police reform, which will include a national database of officers who have been fired for misconduct, as well as encouraging local police departments to do away with choke-holds and no-knock warrants. (Good luck with that.)

• Bad news for Trump (which we always love) as a sizable number of his GOP endorsements were roundly IGNORED by the electorate in recent primaries.

• And finally... as a mood lifter, let's check in on how Jolene over at the Oregon Zoo is doing!