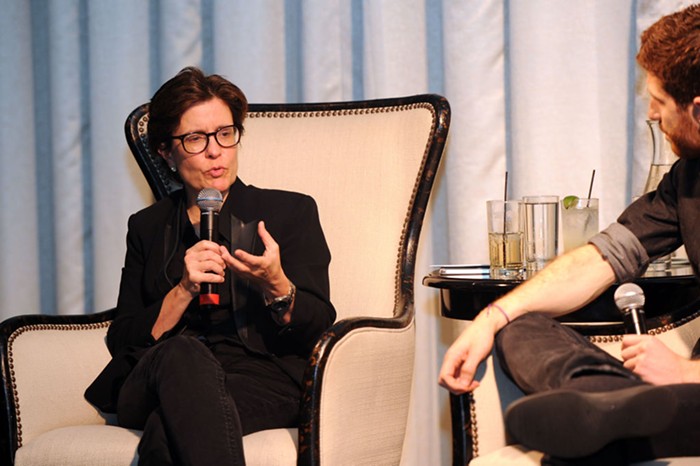 Kara Swisher at RESET TECH in 2018, probably already plotting to make Vox and NYT fight over her. Joshua Blanchard/Getty Images
Good Afternoon, Portland: Who's that cool, crisp girl out there, beaming rays at me? It's PORTLAND WEATHER?! What happened to you? Let's check the NEWS:

• A group of Northeast Portland tenants are suing their landlord for not keeping their complex in “habitable condition.” The elderly, fixed-income residents say that Reach Community Development has ignored repeated repair requests. Mercury News Editor Alex Zielinski has the story.

The Joint Office of Homeless Services bears most of the blame for letting formerly homeless veterans languish for over a year in moldy, expensive housing units, according to an investigation out Tuesday from Portland’s city auditor.https://t.co/mzsJvf63yO
— Rebecca Ellis (@Rjaellis) June 7, 2022

• If there are two polar dualities we can all rely on, it's that you either want to see jumpsuit bois Slipknot or you want to see songwriter/guitarist Marcus King. Enter the Mercury's Free Ticket Tuesday to potentially do one of those things FOR FREE.

• Sometimes shitty relationships happen to good people. So are you the shitty common denominator, or are they—or is a shitty pattern to blame? In this week's Savage Love, Dan offers guidance.

• This week's Return of the Mack award goes to feared tech journalist Kara Swisher, who is moving back to Vox Media, after a two-ish year stint at the New York Times. Bloomberg reports that Swisher will host a new interview show, and the last episode of her NYT podcast Sway will air in late July.

• Omicron cases are rising in Washington State. And while current reports focus on the Tacoma area, you know how Oregon likes to follow along with whatever Washington is doing.

• New York passed a new bill that will impact ticket vendors in their state—and maybe one day others?—mandating that ticket sellers 1) include additional fees at the top of the order, not the end, and 2) tell customers how much they paid for the tickets before reselling them.

• This ranking of Walmart Pride merchandise is deeply chaotic, right down to the twinkly piano music playing in the background.