Today in "Bullshit!": Books for Christmas?!?

Wm. Steven Humphrey
Back to article 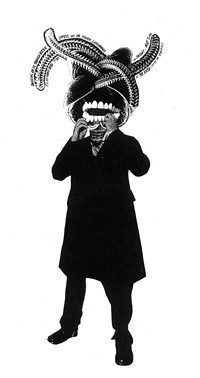 3
This child is the face of America! Complaining on Xmas morning about getting a present, sitting next to a WII box! Send this child to Iraq! Give him some perspective! ARRG! STOP BREEDING!!!
manticore on December 21, 2010 at 1:04 PM Report this

4
Books are one of the main things I ask for for Christmas.


'Twas the night before Christmas, when all through the house
Not a creature was stirring, not even a modest mouse;
The vintage stockings were hung by the chimney with care,
In hopes that St. Isaac soon would be there;

The children were drinking PBR in their beds,
While visions of fixed-gear feminazis danced in their heads;
And mamma in her 'kerchief, and I in my cap,
I rested in the loo to take a vegan crap,

When out on the lawn there arose such a noise,
It was meth heads grinding their teeth: Gresham Boyz.
Away to the window I flew like a flash,
As the first thing they would come for would be my stash.

The moon on the breast of the new-fallen snow
Gave the lustre of a bag of baby powder cut blow,
When, what to my wondering eyes should appear,
But a giant Prius, and eight tiny reindeer,

With a little old driver, so lively and nicely,
We all "Float On" because it's so timely.
More rapid than eagles his courses they came,
And he pogoed, and shouted, and called them by name;

"Now, Eric! now, Jeremiah! now, Joe and Tom!
Johnny Marr just took a shit on my motherfucking lawn!
To the top of the Rose Quarter! to the top of Mt Tabor!
I am not a poet but a chronic masturbator!"

As Saint Cupcakes before the wild hurricane fly,
At Holocene a pretty girl caught my eye
I approached her and I gave her some Jager
Who knew she'd be pregnant 24 hours later?

And then, in a twinkling, I heard on the roof
And smelt a breath that was at least 80 proof
As I drew in my head, and was turning around,
Down the chimney St. Isaac came with a bound.

He was dressed all in fur, from his head to his foot,
In a house of Peta activists, I knew he'd get the boot
A bundle of toys he had flung on his back,
And he looked like a peddler selling crack on the MAX

His eyes -- how they gleamed! his dimples how merry!
His cheeks were like Vicodin, his nose like a cherry!
His droll little mouth was drawn up like a bow,
And the beard of his chin was as white as my coke;

The stump of a pipe he held tight in his teeth,
The marijuana smoke encircled his head like a wreath;
He had a broad face and a little round belly,
That shook, when he laughed like a bowlful of KY jelly.

He was chubby and plump, a right jolly old elf,
And I laughed when I saw him, in spite of myself;
A wink of his eye and a twist of his head,
He ripped out a fart that almost rendered me dead;

He lisped not a word, but went straight to his work,
And filled all the stockings; then turned with a jerk,
"Vegan cookies on a plate from Trader Joes!"
He gobbled them all--up the chimney he rose

He sprang to his Prius, to his team gave a whistle,
And away they all flew like the down of a thistle.
But I heard him exclaim, as he drove out of sight,
"Happy Christmas to PDX, have a great fuckin night."
sir charles myers on December 23, 2010 at 8:55 AM Report this