Book Excerpt: "(When You Gonna) Give It Up To Me" from Funeral for Flaca: Essays

"When you’re the hairy shell of a coconut in a sea of tender and sweet white meat, it’s impossible not to feel like you’ve already fucked up a little bit."

Funeral For Flaca: Essays by Emilly Prado is out July 1 from Future Tense Books. Photo by Josue Rivas / Cover art by Francisco Morales
Editor's note: The following is an excerpt from Funeral for Flaca: Essays, a new book by Portlander Emilly Prado that's out on July 1. The excerpt is from an essay titled “(When You Gonna) Give It Up To Me." You can preorder the book from Powell's.

Did you know one in three Latinas will become pregnant before the age of 20? I sure as hell do, thanks to the enthusiastic white lady from Planned Parenthood who seared it into my brain during one of her visits to our biology class near the end of ninth grade.

Barb was a safe sex zealot. She had dark hair and wasn’t super old yet—30 tops—and giggled as she released new facts into the classroom, letting them linger a little too long before saying another. She seemed equal parts excited and nervous, like the first day I worked at Toys ‘R’ Us after getting away with lying about my birthday so I could work more hours. But Barb went above and beyond: there were anatomically correct plastic genitalia in different colors and sizes, pop quizzes—multi-choice and fill-in-the-blank, and maybe even a condom-covered banana. Between facts, she’d offer her wisdom. The small, latched red plastic Caboodle she brought to class had a slit in the top and students could insert their folded up, top-secret sex questions. She’d answer them aloud. About one in two were jokes.

I can’t recall how my own pregnancy odds stacked up against the other minorities and underserved youth in the classroom, but I do remember it was so bad, she repeated it twice. “Ooonnne in threeeee,” she hissed, gaze oscillating around the beige linoleum box of a classroom to everyone, but especially wide-eyed at the handful of Black and brown girls in the room. The second time she said it I think it echoed out into the hallway, what with all the doom and gloom she shoved out alongside it.

I’m sure the nice white lady didn’t mean to single me, or us statistically at-risk girls out in that suburban Bay Area high school classroom designed by a guy who designed the state’s prisons. But when you’re the hairy shell of a coconut in a sea of tender and sweet white meat, it’s impossible not to feel like you’ve already fucked up a little bit. Plus, I knew if I was immediately tallying up my classmates and doing the math to predict which one of us would get pregnant on account of science, smug ass Timmy from the San Carlos hills sure was too.

All my life, I’ve been dodging the shitty statistics of being a Brown Girl in America.

I had already achieved two superlatives on the list, and a real one for Best Hair in middle school, but being a teen mom scared me the most. So, all I had to do was make it six more years to avoid falling victim to another Brown Girl Stat.

“Did you know if you get pregnant, you only have one of three options?” The nice instructor lady taught us that one, too. You can keep it, give it away, or have an abortion. There was a one in three chance I’d have to make that decision. I could keep it and become a mom that almost flunked out of eighth grade but then dropped out to raise her baby as best as she could by working at Toys ‘R’ Us for 20 years. I could look up an adoption How-To online to figure out how to give my baby away to a family, but they would have to be cool and rich and not racist, which would be hard to find. I could also take a $500 pill and make it go away if I had enough time, or suck it out with a $500 vacuum if I had less time.

Between me, and my cousin Amanda, and my cousin Isela—one of us was destined, statistically speaking, to make the mistake of getting knocked up before really reaching adulthood. Amanda was really good at soccer, Isela was really rich, and I was the one really trying—but failing—with a 1.4 GPA freshman year.

Right in the thick of figuring out whether we should take French or Spanish as an elective, sneak in peppermint schnapps or sour apple gin to the bowling alley, find a dress to wear to the homecoming dance, or pick out where we might apply to college one day, one in three of us would suddenly be forced to squeeze in some time to decide one of three choices for what to do with the growing embryo embedded in our body. Fuck that.

Maybe it was just my turn to be one in three.

I went to school and pretended everything was normal for the next few days. I tried not to think about the looming possibility of a swift end to my youth. Instead, I thought about the classmates who’d gotten pregnant over the years, right before my eyes.

When I was in the seventh grade, an eighth grader got pregnant by her eighth-grade boyfriend. When they had the baby, her parents made her pretend it was her younger brother. In high school, she and her boyfriend were still together and were still slipping up. She got pregnant again and had to transfer to Redwood—the alternative school for students who disrupt classrooms with outbursts of rage and/or swelling bellies. That’s where Wexler’s best friend was sent, too, after she got pregnant junior year. It’s also where Wexler went after he set a piece of plastic to spin in the science lab microwave for eight minutes and it caught on fire.

Rumors swirled that admin shipped pregnant girls off to Redwood so the good girls wouldn’t be tempted to get pregnant too, but I knew teen pregnancies weren’t all bad. I’d seen failing schoolmates turn their shit around and graduate for the sake of their babies. I’d seen pregnant girls get permission to prioritize themselves for the first time in their lives. I’d seen pregnant girls become women and remain kick ass mothers while growing up alongside their babies the whole way. Teen mamas had raised my own sister and cousins and friends, and I would be a kick ass mama if it became my destiny too.

Over the next year or so I drifted further away from my friends and dove into playing grown up with my older boyfriend. We spent nights together regularly. He looked through my phone regularly. We’d fight, and I’d be the one apologizing regularly. We had sex less and less regularly.

I broke up with him for the first time somewhere around fifteen months. This break-up only lasted eight weeks.

We got back together and had more regular missionary sex. We used more condoms. Then we broke up again my junior year. Three weeks after that break-up, I realized I had missed my period. I was 17 years old. I had never missed a period in my seven years of having one.

On a drive home from school later that week, I decided I couldn’t wait any longer to uncover my fate. The pregnancy test commercials had confused me into thinking I had to wait five days or two weeks or something before taking the test. I tried to do the math but didn’t know where to start.

I thought about stopping into the local Planned Parenthood I frequented to stuff my backpack with handfuls of novelty flavored condoms, but I didn’t want to run into anyone I knew. The last thing I needed was to have it become known that I was maybe possibly carrying my ex-boyfriend’s baby. He definitely couldn’t know, and neither could anyone else.

I parked my second-hand Toyota 4Runner in the driveway of my house instead. I don’t remember if it was cold or not, but I put on a black hoodie just for the occasion and stretched the hood over my head as far as it would go. I walked down the steep hill with my head down towards the shopping center.

I picked the furthest entrance to the Luigi’s Market and weaved past the still-warm baguettes, chocolate sprinkle cupcakes, and wheels of parmesan cheese. In the aisle north of the canned artichoke hearts and sundried tomatoes, I found the medicine. I had a problem that needed fixing, but pregnancy tests weren’t a medicine, it turns out. I moved to the next aisle and there— between the single bottle of K-Y Jelly lube and fancy floral adult diapers—were a row of pregnancy tests. I crouched down and picked the cheapest one.

I held it at my hip, close to my body, and moved towards the checkout stands. I had two options: The open register with a boy from school standing behind it and another boy from school ready to bag or register number two where a woman’s groceries were being bagged in plastic by an older gentleman.

The boys laughed and waved their arms to get my attention. The older man told me the other register was open. I pretended I was invisible and didn’t hear a thing. They all shrugged.

When it was my turn, I placed my test, face-down, on the conveyor belt and momentarily stared the store clerk in the eye. We said nothing, and I handed him a single crumpled up $20 bill from my pocket.

Emilly Prado is a writer, community organizer, and the Director of Youth Programs at Literary Arts in Portland, Oregon. When not writing or teaching, Emilly moonlights as DJ Mami Miami with Noche Libre, the Latinx DJ collective she co-founded in 2017. Her debut essay collection, Funeral for Flaca, is forthcoming with Future Tense Books on July 1, 2021. Learn more at www.emillyprado.com or social media @emillygrado. 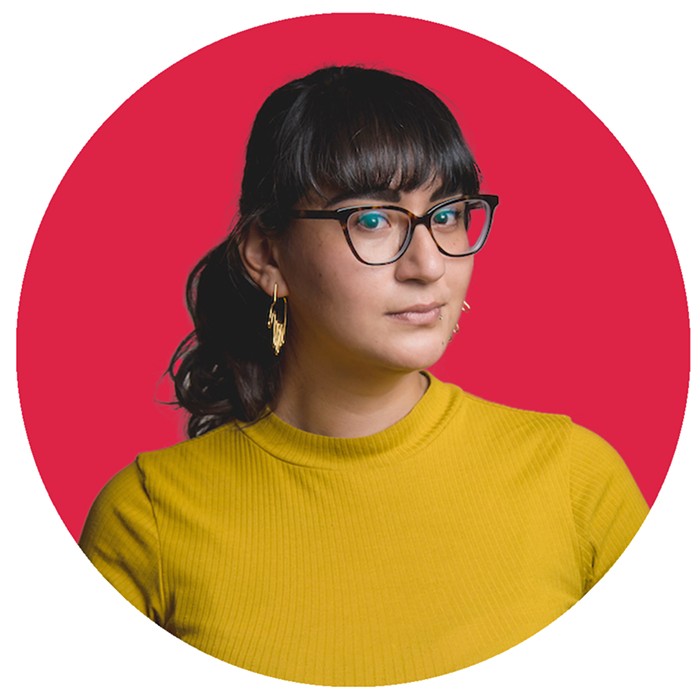