Rajneeshees line up outside of a building in the 1980s. The movement created upheaval in the sleepy town of Antelope, which they renamed Rajneesh. Courtesy of Oregon Historical Society
Any current work about Rajneeshpuram—the cult that operated out of Wasco County, Oregon in the '80s— lives in the shadow of Netflix’s 2018 documentary series Wild Wild Country, which focused on the conflict and tension between Bhagwan’s followers and the area's residents.

However, with his first book, investigator and lawyer Russell King decided to eschew a both-sides-y approach. King’s narrative doesn’t focus very much on rural Oregonians’ conflict with the Rajneeshees. It's certainly in there, but it’s not the most important conflict in his telling. Rather, King portrays Rajneeshpuram as a doomed utopia because of its own internal contradictions.

Rajneeshpuram: Inside the Cult of Bhagwan and its Failed American Utopia (Chicago Review Press) is a deep dive into that one time, in the early 1980s, when a cult set up shop near the tiny town of Antelope, Oregon. It did not go well.

King makes it pretty clear from the beginning that he hates the Rajneeshees. He introduces them to the reader by showing followers of Bhagwan doing the unthinkable: Painting polished wooden fixtures in an old house, and putting carpet over hardwood floors. King gives us plenty of other reasons to dislike the cult: Sexual assault, milking followers of their financial resources, abusing children, using homeless people as political pawns, and bioterrorism. But, he hooks us in with the kind of aesthetic horrors that will probably repulse a good deal of his target audience.

King takes his time focusing on Bhagwan before he was even Bhagwan. In his early days as a guru in India, Rajneesh (born Chandra Mohan Jain, also known as Acharya Rajneesh before coming to the U.S., and Osho after leaving it) was already controversial. He called Mohandas Ghandi a poverty worshiper, disdained much of conventional Hinduism, and when he started calling himself “Bhagwan,” that alienated a lot of his early Indian followers. According to King, that’s essentially like a Hindu holy man calling himself a messiah or divine chosen one. After that, Bhagwan fled India to escape an investigation into his shady finances.

Once the Rajneeshees got to Oregon, they were prepared to use whatever kind of tactics they could to get a foothold. Bhagwan and his followers, according to King, used bad-faith arguments and manipulated people and systems. Their community (which, for legal reasons, was a farm, but never functioned as one) was run more like an authoritarian cult of personality than an actual commune built by a community.

The cult was built on a man who, Russel says, took sexual advantage of his female followers, gleefully pocketed the wealth of his disciples, and who also threatened to kill himself if his followers didn’t buy him a new Rolls-Royce or fancy watch.

The town of Rajneeshpuram descended into paranoid violence, with attempted poisonings of restaurant-goers in the Dalles and planned assassinations of Oregon officials. That violence eventually (and seemingly inevitably) turned inward. Near the end of the book, Bhagwan’s outwardly cheerful followers are plotting how to kill each other, with one high-up cult member narrowly surviving an assassination attempt by a rival faction. 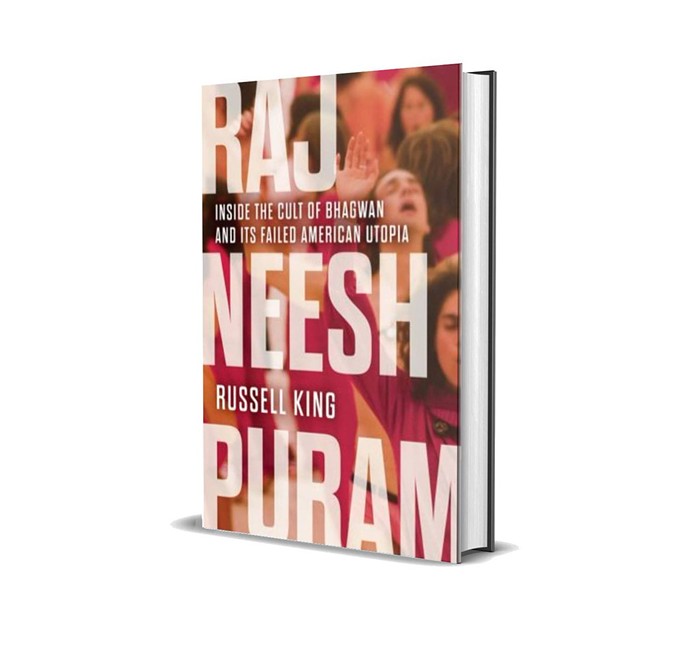 Courtesy of Chicago Review Press
All of this builds a case in King’s telling: Bhagwan and his cult were inherently doomed. They would have been in conflict with any community they settled in, and they just happened to settle outside Antelope, Oregon.

King’s intense focus on the inside of the cult is fascinating, and paints a tense, claustrophobic picture of a society collapsing in on itself. But, this narrative intensity comes at a cost: Reactions to the Rajneeshis from without are regarded almost like forces of nature in King’s telling, rather than real people who had opinions and agency. He downplays what’s going on outside of the commune.

We don’t get a sense of what the public in Oregon or the wider world thought of the cult, or any examination of whether the cult’s opponents were also engaged in bad-faith tactics fueled by xenophobia or racism. Just because government officials and Oregonians disliked the Rajneeshees, it doesn’t necessarily follow that they disliked them or investigated them for the right reasons. It is indeed possible for an organization to be terrible, and also the subject of unfair scrutiny by the Immigration and Naturalization Service (INS) or a local elections board.

This isn’t to say King should have done a cliched “both sides” look at the Rajneeshees and their opponents (as Wild Wild Country sometimes did) but, the Rajneesh cult was a worldwide organization that was in the local, national, and international spotlight for years. The wider world paid attention to them in the press, popular media, and political discussions. That’s mostly missing from King’s otherwise excellent book. He brings us deep into rural Oregon, surrounded by a decaying would-be utopia, with no real way out, other than disenchantment and collapse. That’s a compelling view, but a limited one.

Joe Streckert is the author of Storied & Scandalous Portland, Oregon: A History of Gambling, Vice, Wits, and Wagers. He writes about books, history, and comics.
If you enjoy articles like this, please help the Mercury continue our mission of providing up-to-the-minute information, progressive journalism, and fun things to do in Portland by making a small recurring monthly contribution. Never forget: Your help is essential and very much appreciated!
CONTRIBUTE NOW