Alex Falcone Is Portland's Funniest Person Due, in No Small Part, to His Dope Feminist Son 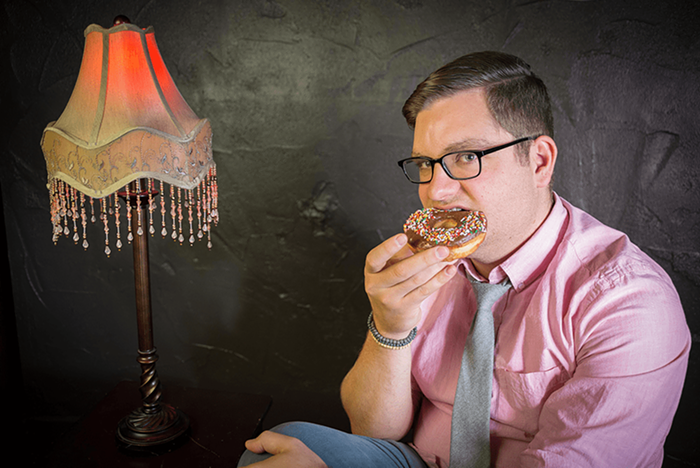 It's a real pleasure to announce that the well-deserving winner of Helium Comedy Club's Portland's Funniest Person title is good/clever/film-loving/married fella Alex Falcone! He owes his win, in no small amount, to the final few jokes from his championship set—about how he would want to raise his potential, future-style dope feminist son. That one brought the house down.

Falcone worked hard for that sparkly tiara. And he was not alone. Twelve other comedians got up there and projected clever, ironic, hilarious word metaphors into the darkness. I was merely a person sitting in the pitch darkness of the sold-out show eating chicken strips, but I feel tired. I'm like a one of those construction guys that watches twelve comedians dig a ditch. Whew! Folks, I don't know how you did all that. *lays down and continues typing* Ah, that's better. Wednesday night's judging (Full disclosure: Mercury Editor-in-Chief Steve Humphrey was one of the judges) was exactly how I would have wanted my top three.

Second Runner-Up Corina Lucas brought a ton of energy with her performance. Though relatively new to Portland stand-up, her cleverness and insight into her pre-op trans woman experience was as fascinating as it was funny. Lucas had the audience leaning in, learning about new vagina depth (Lucas, insists she will have the DEEPEST vagina), and flippin' engaging with her set.

Of all the comedians that graced the stage, no one worked harder than 2017 PFP Caitlin Weierhauser. As the show progressed, I grew nostalgic for the unique / good-natured Weierhauser reign. I kind of wanted to Game of Thrones some shit so she could stay sovereign. It's so haaaard to say goodbyeeee to Caitlin Weierhauser‏. I'm just being dramatic. We're not saying goodbye. Weirhauser is all over Portland's comedy scene and hosts great recurring shows like Lez Stand Up and the Mercury's I, Anonymous Show.

my pal @alex_falcone won Portland's Funniest Person, which is fantastic because he 100% deserves it. also, i've learned a lot of disturbing secrets about his personal life over the course of our friendship & with that prize money, he's finally worth blackmailing
— katie nguyen (@ktnuggin) July 19, 2018

In the end, Alex Falcone was the only comedian I wanted to see winning the 2018 Funniest Person title and wearing Helium's sparkly tiara. For years now, Falcone's been hitting comedy's dusty trails, continually reinventing himself as a writer, stand-up comic, and live show host. He wrote a number of features for the Mercury, including several, very funny "Things Not Invited Back" New Year's features. He's also a founder of the excellent Earthquake Hurricane comedy showcase (alongside, a treasure trove of local talent, Mohanad Elshieky, Katie Nguyen, and Anthony Lopez) so that might be your next best place to see his sharp but self-deprecating comedy style.

Here's a variation on the joke Falcone used to close his championship stand-up set. Wednesday's version was a little tighter, but this one has all of the good-natured Falcone fun that we'll be looking forward to for the duration of his 2018 reign.