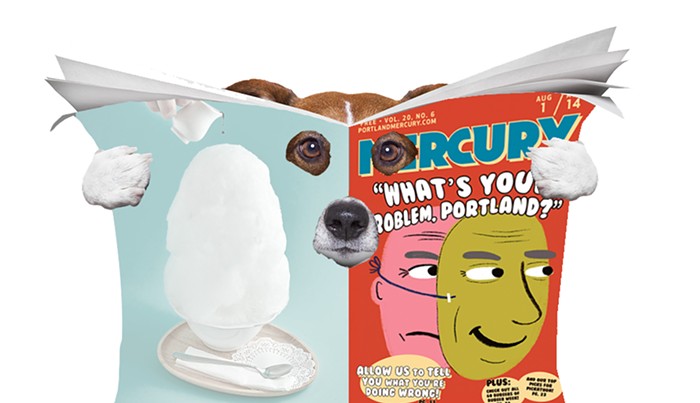 Hi again! How are you? Wait... let me answer that: You’re feeling curious. About ME! Why? Because I recently asked you to write in and ask personal questions about ME and the industry of newspapering. And since you’ve already sent a butt-ton of questions, let’s dive in, shall we?

Kelly Robertson writes, “What does the ‘Wm.’ in ‘Wm. Steven Humphrey’ stand for?” Good question, Kelly! “Wm.” is an old-timey, shortened version of William, which I started using because typing out “William Steven Humphrey” takes up too much space in a byline. “Okaaaaay...,” you say suspiciously, “but if you’re so concerned about space, why use William at all?” Because (fun fact) I’m the sixth William Humphrey in my family, and when I started writing professionally back in the early ’90s, I thought it would be a nice tip o’ the hat to my ancestry.

But... PLOT TWIST! Over time I discovered that the act of “passing a name down through generations” is actually just more patriarchal bullshit which ensured that special privileges would continue getting heaped upon male heirs instead of the women in their family. So great job, “Wm. Steven Humphrey”! Thanks for perpetuating the patriarchy! UNGGGHH! WHY DID I PICK THIS QUESTION??

Okay, sure, I could probably just drop the “Wm.”—but to do so now would totally fuck up my branding and SEO! (That’s fancy talk for “search engine optimization.”) But there is good news: I don’t have any male heirs and thanks to my vasectomy, I never will! So as you can see, I’m doing my part to dismantle the patriarchy by preemptively aborting all future Wm. Humphreys. DIE, patriarchy! DIE, future Wm. Humphreys! DIE! DIE! DIE!!

Next question: Nigel asks, “Who are your corporate overlords and how much do they determine your publication’s content and how much favor do advertisers get, if any, in reviews or coverage?”

Again, great question! The Mercury is owned by Index Newspapers which consists of Seattle’s The Stranger and... us! The Portland Mercury! I’m a part owner of Index, and since I rarely get overlorded by my partners, I guess my direct corporate overlord is me? (But believe me, I overlord the shit out of myself.) I also overlord all the Mercury’s editorial content, assisted by my AMAZE-BALLS staff who thankfully overlord me when I’m about to write something stupid.

As for the advertising question, the Mercury has a strict “separation of church and state” policy: Our sales staff never tells us what to write about, and in return, editorial promises to stay out of sales’ goddamn business. However, that’s not to say we never speak to each other: In fact, the entire office spent the majority of an afternoon endlessly discussing Disney’s live action Lion King on Slack instead of... you know... WORKING. Anyway, while I would love to encourage everyone to purchase a very reasonably-priced ad in our newspaper that will get you tons of reach, A) there’s that “church and state” thingy, and B) I don’t want to overlord you. (Unless, you know, getting overlorded is something you’re into. DM me.)

Team! You’re learning so much about me! We’ll get to more of your questions next time, but until then, send all queries to your benevolent overlord at steve@portlandmercury.com.