The Weirdest Hazy IPAs We Could Find, Reviewed 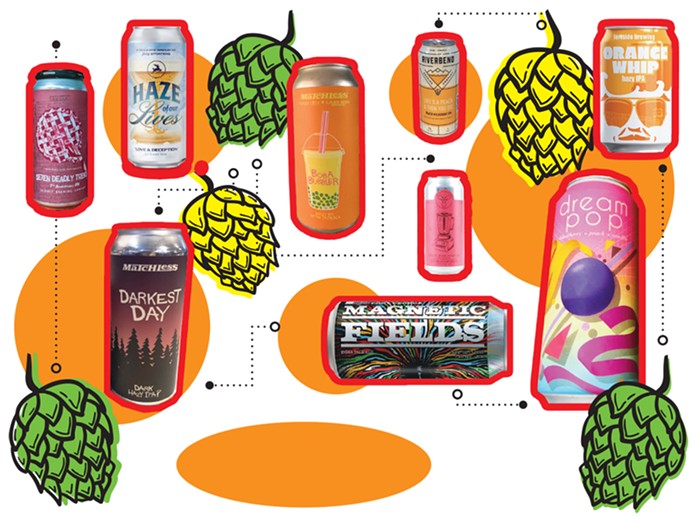 Beer Alternatives That Are Zero-Proof, Not Zero-Fun

Hazy IPAs probably aren’t the final frontier of beer brewing, but the more experimental enthusiasts certainly do act like it. But are any of these complex IPAs with too much crap in them actually any good? We’ll be the judge of that!

October is Dine the Couve - 3 for $25 menus
Experience the bounty of northwest flavor with special menus at Clark County restaurants all month.

Speaking of putting weird stuff in beer, Loowit’s Se7en Deadly Trends has pies (like, full pies) in it—or “Fruit brut pastry,” according to the can.

“‘Brut’ means champagne,” said a former beer sommelier who was wingman-ing some of our tastings.

“It says full pies,” I said. “They add whole pies, that they make inhouse, to the kettle during boil.”

We both agreed there were passionfruit notes in the Se7en Deadly Trends. But still... what is in those pies? If you were hoping to taste buttery crust, you’re out of luck. This is a tart, middle-body hazy. A whole lotta fuss, with some follow-through.

Okay, so this is juice. It looks like juice, and tastes like delicious, thick kombucha, but if Modern Times wants to call it beer, then I will come along. Dream Pop is a hazy fruited IPA, and is Modern Times’ take on the creamy milkshake IPA. (Warning! If you’re vegan, let the term “milkshake” alert you to the possibility of lactose sugar!) But since Modern Times is a vegan brewery, they create the milkshake-like haziness with a frickin’ boatload of peaches and blackberries, then tie the flavors together with vanilla.

Life’s a Peach and Then You Die, Riverbend Brewing

Of course the beer that Mercury News Reporter Blair Stenvick recommended turned out to be incredible. Life’s a Peach is a milkshake IPA that could unite the armies of France, or, as my beer sommelier put it, “This is a beer my mom would like.” This hazy IPA could coalesce a wide spread of beer drinkers with its perfect hint of peach and its easy existence between sweet and tart. Both Life’s a Peach and its brewery sibling Hawaiian Crunk contain lactose sugar, which may explain their perfect creaminess. Hawaiian Crunk is like a creamy fruit punch, which I’m not sure anyone ever asked for, but here we are—and I’m a fan. After tasting a field of beers that promised a pine aftertaste, I finally tasted pine in Hawaiian Crunk, a beer that never promised it. What a delightful sensorial blend!

Well, that’s a taste. Certainly a taste. “Are you getting petroleum?” I asked the beer sommelier. “I’m getting a smoky coconut,” she replied. Neither of us tasted the tapioca pearls or brown sugar we were promised. We both agreed that Boba Bubbler is malty, though.

Though it bears no resemblance to the delicious frozen treat of my youth nor the cocktail of my adult years, Fortside Brewing’s Orange Whip does bring a respectable level of creaminess. My complaint: Where’s the orange? The grapefruit comes through in a pleasant way. I declare this a luscious citrus haunting.

“Can you note my disappointment at the false advertising?” the beer sommelier asked, after we expressly picked up this hazy for the hilarity of its can, whose branding promised a soap-opera level of “flowering drama and bold finishes.”

“It has a mouth-numbing quality,” the beer sommelier assigned. “Like dental surgery.”

This “dark hazy IPA” is not very hazy-like. The only similarity might be the thickness, but it seems to more closely resemble a stout, but without a stout’s potential for sweetness. “This is a winter warmer,” the beer sommelier decreed. Darkest Day is quite bitter and malty, but still satisfying.

Smells like juice, but tastes like oatmeal? Three Magnets’ Little Juice Smoothie has a lot of delightful contradictions and complexities. It’s malty and has a dark, smoky taste. We end up describing this hazy as an oatmeal cookie beer.

This last beer is merely “hazy inspired,” but it’s a brand-new seasonal, so the time seemed right to include it. The gorgeous can art attracted us, but the light, bright beer left us satisfied. Still, this beer brought a lot of delightful pineapple associations and a full hoppy flavor.

This Week in Food News: Farewell to Ford Food and Drink, Gin in a SE Alley, and the Pearl's New Italian Market