Look at All That Meth!

It's a classic drugs on the table meth bust! But instead of a carefully coordinated SWAT team swooping into the home of a drug lord, Portland police report that they just stopped this dude walking down SE Stark near 158th Avenue, asked to search his bag, and found six pounds of meth worth $268,000.

The guy looks really sad about it.

Just another danger of being a pedestrian in Portland. The police could stop you and take your meth collection AT ANY TIME.

UPDATE 5:40PM—Oh Gods! On the heels of this, the Portland Police made the biggest drug bust in Portland history today with the type of coordinated warrants and house-sweeps kind of action I was talking about. From three homes, they seized 28 pound of heroin, 2 pounds of cocaine, $156,000 cash, 6 handguns, one rifle and (inexplicably noted in the press release) one horse trailer and six saddles.

Which raises the alarming question: Are people dealing drugs by horse these days? Heroin Pony Express! There must be a market for that. Anyway. This is no time for jokes. Lots of hard drugs are off the streets of Portland! Here's a literal drugs on the table photo of the loot. 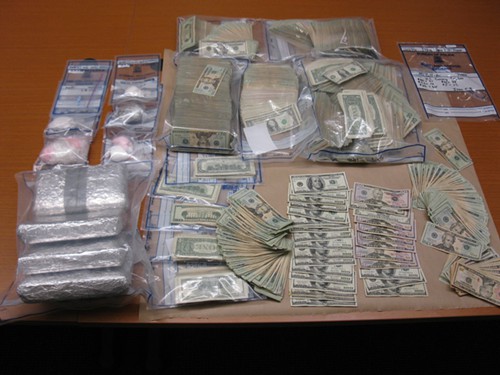 Which raises another question: Whose job is it to fan the money across the table? Nice bills-arranging work. I like a cop with a flair for aesthetics.

Comments 18
Tags: Crime Blogs
If you enjoy articles like this, please help the Mercury continue our mission of providing up-to-the-minute information, progressive journalism, and fun things to do in Portland by making a small recurring monthly contribution. Never forget: Your help is essential and very much appreciated!
CONTRIBUTE NOW