Excerpts From Letters Multnomah County Judges Placed in a Time Capsule, To Be Read by Colleagues 100 Years in the Future

Even two year later the letters provide a snapshot into how the judges felt about the new courthouse and the social justice protests unfolding just blocks away. 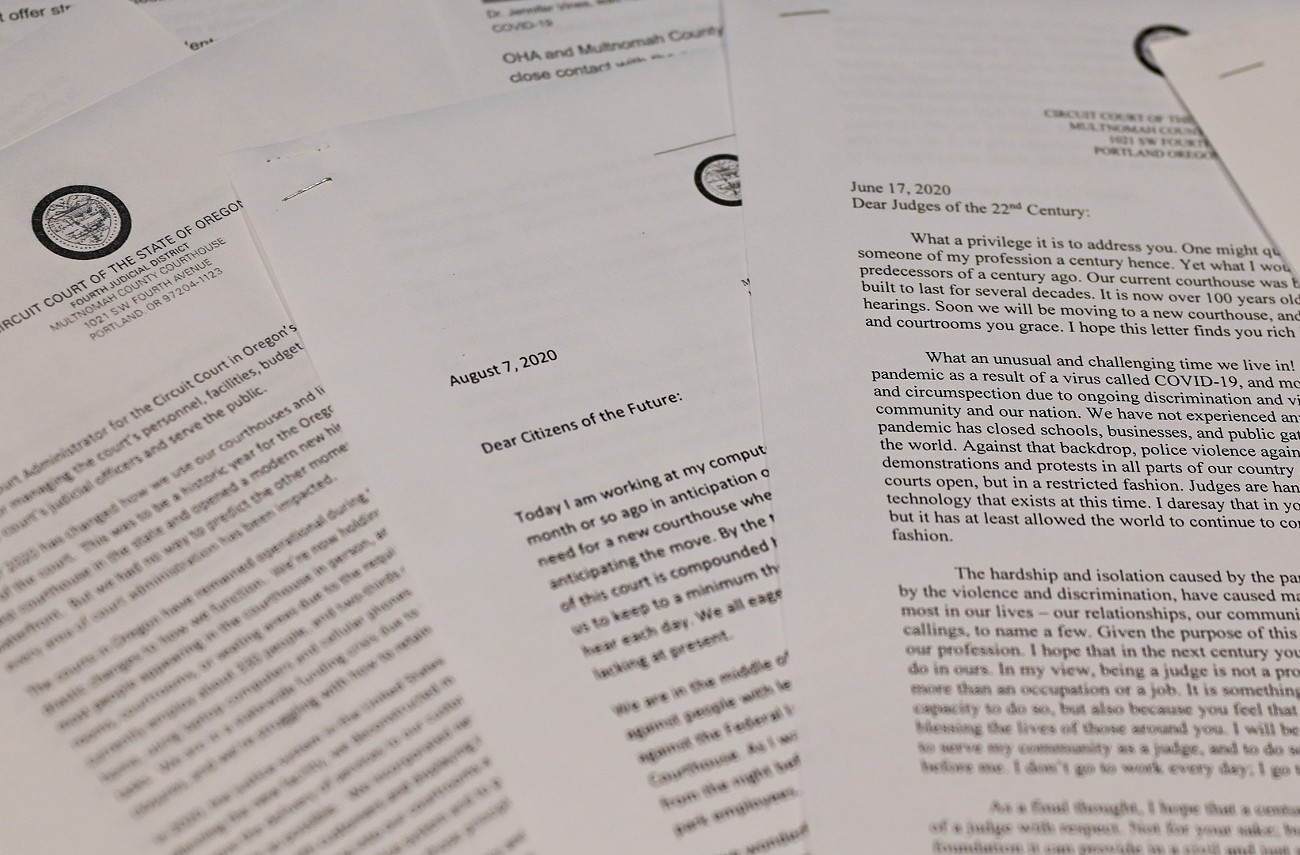 On December 5, Multnomah County sealed a time capsule into the wall of the Multnomah County Central Courthouse, sending judges and staff 98 years in the future a portrait of Portland in the summer and fall of 2020.

The new courthouse opened in October 2020, but there was never a formal celebration or ceremony, so the capsule viewing was seen as an opportunity to do so—though Multnomah County Circuit Court Judge Nan Waller told the Mercury she hoped there would still be a chance to celebrate with the public, to honor all the people who worked on the courthouse. "People who gave input, tradespeople," she listed. "Hundreds and hundreds of people worked on this building."

The time capsule contains photos taken by county photographer Motoya Nakamura, printouts of key Multnomah County press releases from the pandemic, a print copy of an issue of the Portland Business Journal about the courthouse, and printouts of notable 2020 Oregonian articles. Also in the capsule: a square of the old PDX airport carpet, a box of Antigen COVID-19 rapid tests, several cloth masks, a Black Lives Matter t-shirt, a torn and repaired judge robe from Judge Waller and a wood gavel, also from Waller. She said she never uses a gavel in her court ("to the disgust of many children who expect it"), and this has led to her receiving many as gifts, over the years.

The most interesting part of the capsule may be the letters from county judges, addressed to future colleagues. Dated between June and September of 2020, the letters read like a time capsule even two years later, providing a snapshot into how the judges felt about the new courthouse and the social justice protests unfolding just blocks away.

"The Justice Center, the Multnomah County Courthouse, and the federal courthouse have been under attack in recent weeks," the letter from Circuit Court Judge Stephen Bushong began. "Night after night, vandals have smashed windows, set fires inside and outside, and painted graphic messages on the walls."

"The violence directed against the courthouse must stop," Bushong continued. "Our courts are an integral part of the justice system, ensuring justice for all…. Every day, proceedings are held in the courthouse protecting people from harm and helping them resolve their disputes peacefully…. Defacing the courthouse undermines both the message of the Black Lives Matter protests and the mission of our justice system."

Later in the letter, he acknowledged unjust histories—such as that of Minor Yasui, a lawyer who was held in the Multnomah County Jail before he was moved and subsequently incarcerated in a relocation camp—as reasons why activists might view the courthouse as a symbol of injustice.

When it came to Circuit Court Judge Michael Loy, the bulk of his letter consisted of a knock knock joke:

Nobody, it's a pandemic."

"The parking structure is an ugly, three story concrete block with small spaces. It fills early, at least during normal times, leaving one trying to find a spot where it is least likely adjoining cars will open their doors into yours and ding the paint." Ramras used the description to segue into arguments for why the old courthouse was too unsafe for use and waxed nostalgic about aspects he'll miss: "I like the ridiculously large and ornate metal torches outside the entrance…. They must have been costly to make and are totally impractical; the type of adornment government would not waste money on today."

Ramras also mentioned the racial justice protests: "Protestors are predominantly peaceful, but there is a small contingent that is destructive, damaging property and spray painting indiscriminately…. The new courthouse, which is of course 'old' to you, has not been targeted as it is not currently identifiable by signage. We wonder whether it will sustain graffiti the moment we move in. We remind ourselves not to let this small percentage detract from the broader message and lessons that can be learned by the protestors. These uncertain times have led many of us to question our practices, to ask ourselves what we can do better to ensure that our system truly is one that promotes, in the words of the Pledge of Allegiance, 'justice for all'."

The time capsule will be reopened by the county in 2120. 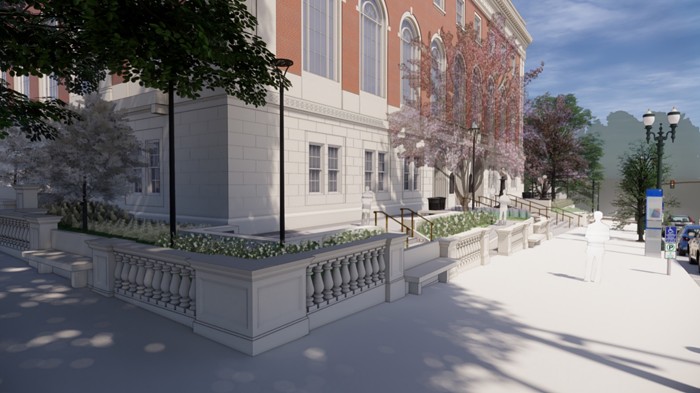 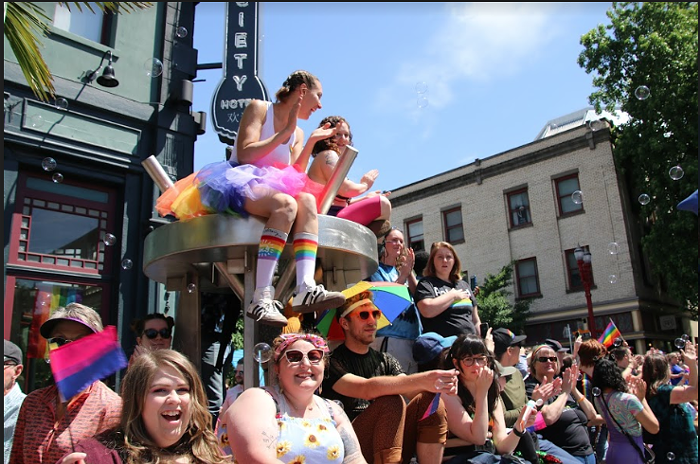 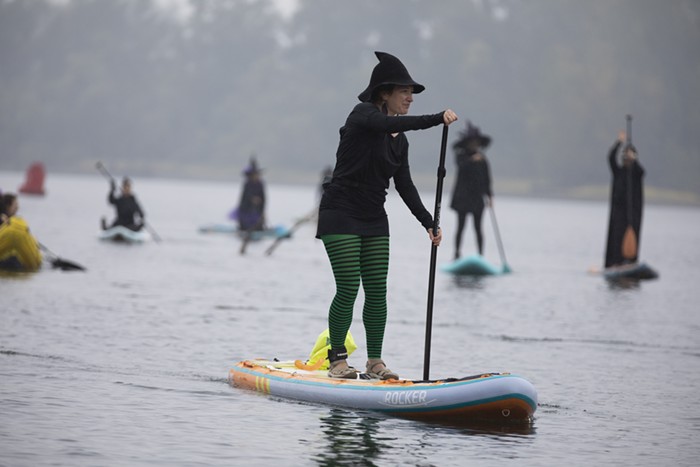